Barry John Maister is a former New Zealand field hockey player, who was a member of the national team that won the gold medal at the 1976 Summer Olympics in Montreal. He is also a former member of the International Olympic Committee.

Boxing at the 1984 Summer Olympics took place in the Memorial Sports Arena in Los Angeles, California, United States. The boxing schedule began on July 29 and ended on August 11. Twelve boxing events were contested with the participation of 354 fighters from 81 countries. A Soviet-led boycott resulted in the withdrawals of the Soviet Union, Cuba, East Germany, Bulgaria and other Eastern Bloc nations from boxing competitions.

Margaret Rejean Matthews is an American track and field athlete who mainly competed in the 100 meters and long jump events.

Ireland competed at the 1948 Summer Olympics in London, England. It was the first time that the country had competed in the Summer Olympics since 1932. A dispute between rival Irish Athletics governing bodies saw many Irish athletes barred from taking part in the Athletics competitions. 72 competitors, 68 men and 4 women, took part in 32 events in 9 sports.

Benin took part in the 2008 Summer Olympics, which were held in Beijing, China from 8 to 24 August 2008. The country's participation at Beijing marked its eighth consecutive appearance in the summer Olympics since its debut in 1972, and its ninth Olympic appearance ever. The Benin delegation included five athletes in 2008, participating in three sports: athletics, swimming and taekwondo. Fabienne Feraez, a sprinter, was selected as the flag bearer for the opening ceremony. None of the Benin athletes progressed further than the heat round.

Barry Edward Dagger is a British former sport shooter. Dagger competed in the 1976 Summer Olympics and in the 1984 Summer Olympics. He represented England in the 50 metres rifle prone, at the 1978 Commonwealth Games in Edmonton, Alberta, Canada. He represented England and won a gold medal in the 50 metres Rifle 3 Position (Pair) and a silver medal in the 10 metres Air Rifle (Pair), at the 1982 Commonwealth Games in Brisbane, Queensland, Australia. 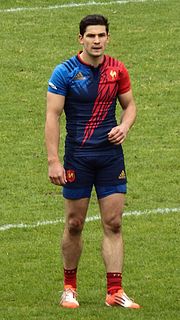 Steeve Barry is a French rugby seven back who competed at the 2016 Olympics.

John Joe Barry was an Irish middle-distance runner. He competed in the men's 1500 metres at the 1948 Summer Olympics.

William Barry was an Irish footballer. He competed in the men's tournament at the 1948 Summer Olympics.

Oldridge is a surname. Notable people with the surname include: