Moller was married to fellow Olympian Ron Daws [2] and coached by John Davies.

Moller's first international competition was the 1974 British Commonwealth Games at Christchurch, where she finished fifth in the 800 m. Her time of 2:03.63 was her lifetime best and is still the fastest ever by a New Zealand junior (under 20) woman. [3]

Although Moller ran her first marathon in 1979, there were no sanctioned marathons for females at an international athletics competition until 1984. Moller was instead selected for both the 1500 m and 3000 m at the 1982 Commonwealth Games in Brisbane, winning bronze medals for both events.

In the 1993 New Year Honours, Moller was appointed a Member of the Order of the British Empire, for services to athletics. [4]

Moller ran her first marathon on 23 June 1979, winning Grandma's Marathon in Duluth, Minnesota in 2:37:37. The time was the fastest ever by a New Zealander and the sixth-fastest ever run by a woman. [5] She then won her next 7 marathons.

She was a triple winner of the Osaka Ladies Marathon, and in 1984 won the Boston Marathon. [6]

All of Moller's appearances at the Olympic Games were in the marathon. Her full records are:

She also won the silver medal at the 1986 Commonwealth Games in Edinburgh, running 2:28:17, her lifetime best.

In 2012 she was inducted into the Boulder (Colorado) Sports Hall of Fame. She has worked with the Lydiard Foundation and the Master Plan training system to share the lessons of running coach Arthur Lydiard. [7] 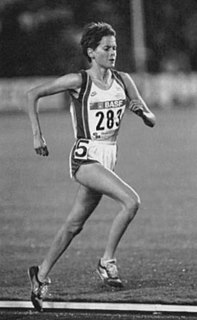 Zola Pieterse is a South African middle-distance and long-distance runner. She competed at the 1984 Olympic Games for Great Britain and the 1992 Olympic Games for South Africa, both times in the 3000 metres. In 1984 (unratified) and 1985, she broke the world record in the 5000 metres. She was also a two-time winner at the World Cross Country Championships (1985–1986). Budd's career was unusual in that she mainly trained and raced barefoot. She moved with her family to South Carolina in 2008, and competes at marathons and ultramarathons. She volunteers as assistant coach at Coastal Carolina University in Conway. Her mile best of 4:17.57 in 1985, still stands as the British record.

Elizabeth Nuttall is a British former middle-distance and long-distance track and road-running athlete. She won the gold medal for the 10,000 metres at the 1991 World Championships, and a silver medal over the same distance at the 1988 Olympic Games. She was also a two-time gold medallist over the distance at the Commonwealth Games, as well as winning the 1992 World Half Marathon Championships, 1991 New York City Marathon, 1992 Tokyo Marathon and 1996 London Marathon. Her 10,000 metres best of 30:57.07 set in 1991, moved her to second on the world all-time list at that time and still stands as the Scottish record. Her marathon best of 2:26:52 in 1997, stood as the Scottish record until 2019. 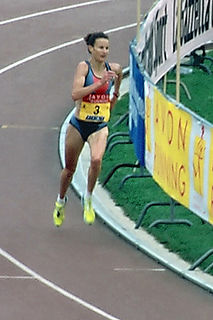 Jonathan Michael Brown is a former British long-distance runner who specialised in 10,000 metres, cross country running and the marathon. 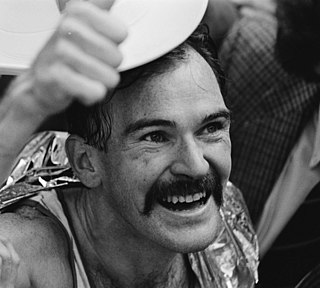 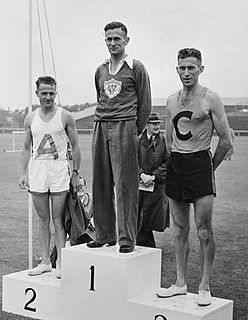 Ingrid Kristiansen is a Norwegian former athlete. She was one of the best female long distance runners during the 1980s. She is a former world record holder in the 5000 metres, 10,000 metres and the marathon Kristiansen was a World Champion on the track, roads and cross-country. She was the first athlete to win World titles on all three surfaces. At the 1984 Los Angeles Olympics, she finished fourth in the first women's Olympic marathon. At the 1988 Seoul Olympics, she dropped out of the 10,000 metres final while leading. Early in her career, she was also an elite cross country skier, winning several Norwegian titles and a European junior championship.

Lisa Frances Ondieki is an Australian former long-distance runner. In the marathon, she won the 1988 Olympic silver medal and two Commonwealth Games gold medals. Other marathon victories included the 1988 Osaka International Ladies Marathon and the 1992 New York City Marathon. She also won the Great North Run Half Marathon three times. Her best time for the marathon of 2:23:51, set in 1988, made her the fourth-fastest female marathon runner in history at the time.

Joyce Esther SmithMBE is a British former long-distance runner. She broke the world record in the 3000 metres in 1971 and is a three-time medallist at the International/World Cross Country Championships, including winning in 1972. She went on to twice win the London Marathon, becoming the first British woman in history to run under 2:30 when winning in 1981 with 2:29:57, before further improving the British record to 2:29:43 when winning in 1982. She also competed in the 1500 metres at the 1972 Munich Olympics and finished 11th in the marathon at the 1984 Los Angeles Olympics, aged 46.

Ron Daws was a runner and 1968 Summer Olympics men's marathon athlete. Born in Minneapolis, Minnesota, he also competed at the 1967 Pan-American Games marathon and finished first in the National AAU Marathon also in 1967 on June 11.

Dulce María Rodríguez de la Cruz is a Mexican long-distance runner who competes in track and road running events, including the marathon. A three-time Olympian for Mexico, she has also run for Mexico at the World Championships in Athletics on three occasions.