Rodney Phillip Dixon (born 13 July 1950) is a former New Zealand middle- to long-distance runner. He won the bronze medal in the 1500 metres at the 1972 Olympics in Munich, and in 1983 won the New York City Marathon.

He first represented New Zealand at the 1972 Summer Olympics in Munich , finishing third in the 1500 metres. [1] At the 1974 British Commonwealth Games in Christchurch he finished fourth in the 1500 metres. His time of 3:33.89 (officially 3:33.9) was the fifth fastest ever at the time and remained Dixon's lifetime best for the distance. He then moved up to the 5000 metres and was ranked first in the world for the event in 1975 by Track & Field News magazine.

Unable to compete due to an injury, Dixon guided a blind runner in the 1985 Bay to Breakers. [6] At the 1985 New York Marathon, Dixon served as the first host for the participatory "Helmet Cam" as he followed the lead pack for a mile during the race. [6] [7]

The boycott [3] of the 1980 Summer Olympics lead Dixon become embroiled in a savage row with the NZ Amateur Athletic Association, he got wind of the boycott some time before it was announced and confronted NZAAA over it, teams which were to compete in the coming Olympics were in their final preparations and some athletes in teams like the rowers and hockey players were leaving there jobs so they could compete without any idea that there would be a boycott. Dixon felt that the New Zealand government had no business meddling in the Olympic games and the athletes should have been consulted and been part of the decision making process. This rift lead to Dixon relocating to the US to compete in the road racing circuit.

After winning the New York Marathon, Pan Am put his name on the side of one of its 747s and gave him a "self-write ticket" - for first class. He used to say to his "friend", Want to go to Zurich tonight? And off they'd go, for dinner.

Grete Waitz was a Norwegian marathon runner and former world record holder. In 1979, she became the first woman in history to run the marathon in under two and a half hours. She won nine New York City Marathons, women's division, between 1978 and 1988, more than any other runner in history. She won a silver medal at the 1984 Olympic Games in Los Angeles and a gold medal at the 1983 World Championships in Helsinki. Her other marathon victories included winning the London Marathon in 1983 and 1986. She was also a five-time winner of the World Cross Country Championships. 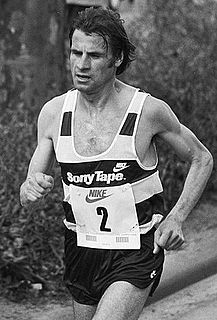 Harald Norpoth is a West German former middle and long distance runner. He won the silver medal over 5000 m at the 1964 Summer Olympics in Tokyo as a member of the United Team of Germany. He had already competed in the 1962 European Athletics Championships, where he had fallen and dropped out of the 1500 m final. His high quality as both a 1500 m and a 5000 m runner was proved in the 1966 European Athletics Championships, where he won the bronze medal at 1500 m and the silver medal at 5000 m.

Klaus-Peter Hildenbrand was a West German athlete who competed mainly in the 5000 metres.

The men's marathon at the 1976 Summer Olympics in Montreal, Canada, was held on Saturday July 31, 1976. The race started at 17:30 local time. There were 67 competitors from 36 countries. Seven of them did not finish. The maximum number of athletes per nation had been set at 3 since the 1930 Olympic Congress. The event was won by Waldemar Cierpinski of East Germany, the first Olympic marathon medal by any German runner. Frank Shorter of the United States and Karel Lismont of Belgium became the third and fourth men to win a second medal in the event, each one place behind their 1972 results. Ethiopia's four-Games marathon medal streak ended, as the nation boycotted the Games.

Wodajo Bulti is a retired Ethiopian long-distance runner who specialized in the 5000 metres, 10000 metres and cross-country running.

Paul Richard Cummings was a world-class middle and long distance runner who ran competitively from the 1,500 meters to the marathon, breaking several American records and one world record. His ability to have a middle distance runner's kick and also have the stamina to compete in distances up to the marathon place him as one of the most versatile American track and road racers of his era.

These are the official results of the Men's 5.000 metres at the 1976 Summer Olympics in Montreal, Quebec, Canada. The final was held on Friday July 30, 1976, after the three qualifying heats were run on Wednesday July 28, 1976. 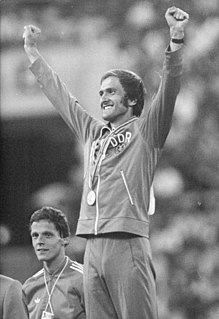 The men's marathon at the 1980 Summer Olympics in Moscow, USSR had an entry list of 76 competitors, with 74 athletes from 40 nations starting and 53 runners finishing the race held on Friday 1 August 1980. The maximum number of athletes per nation had been set at 3 since the 1930 Olympic Congress. The event was won by Waldemar Cierpinski of East Germany, the second man to successfully defend Olympic gold in the marathon. Both the Netherlands and the Soviet Union won their first men's Olympic marathon medals.

The Lasse Viren Finnish Invitational, frequently shortened to Viren or the Viren 20K, is a 20 kilometre running race held annually on the trails of Big Sycamore Canyon, part of the Point Mugu State Park near Malibu, California.

Gary M. Fanelli is a long-distance runner from the United States who represented American Samoa in the marathon at the 1988 Summer Olympics in Seoul, South Korea. Fanelli's 2:25:35 performance at the Olympics is an American Samoan national record. Known for running in costume, he has been called "the crown prince of road racing", "the king of costume", and "road-racing's longest-running joke".

Justin Gloden is a Luxembourgish athlete competing in the long-distance events. He represented his country in the marathon at the 1988 Summer Olympics finishing 36th out of 118 competitors. He also competed at the 1983 and 1987 World Championships.

Thomas Osano is a Kenyan former long-distance runner who competed across track, road, and cross country running disciplines. His greatest individual honour was a 10,000 metres gold medal at the 1991 All-Africa Games. He also shared in a team gold medal with Kenya at the 1993 IAAF World Half Marathon Championships.