Macbeth, Op. 23, is a symphonic poem written by Richard Strauss between 1886 and 1888. [1] The work was his first tone poem, which Strauss described as "a completely new path" for him compositionally. [2] Written in some semblance of sonata form, [3] the piece was revised more thoroughly than any of Strauss's other works; these revisions, focused primarily on the development and recapitulation sections, show how much the composer was struggling at this point in his career to balance narrative content with musical form. Bryan Gilliam writes in The New Grove Dictionary of Music and Musicians that, "New path or not, Macbeth failed to find a firm place in the concert repertory, because it lacked the thematic cogency and convincing pacing of musical events so evident in the two antecedent works [ Don Juan and Tod und Verklärung ( Death and Transfiguration )]. And despite revisions to the orchestration, in an attempt to restrain inner voices and highlight principal themes, Macbeth still falls short of Don Juan and Tod und Verklärung in sonic clarity." [2]

A symphonic poem or tone poem is a piece of orchestral music, usually in a single continuous movement, which illustrates or evokes the content of a poem, short story, novel, painting, landscape, or other (non-musical) source. The German term Tondichtung appears to have been first used by the composer Carl Loewe in 1828. The Hungarian composer Franz Liszt first applied the term Symphonische Dichtung to his 13 works in this vein. 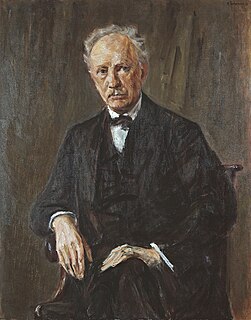 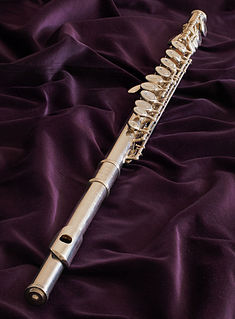 The Western concert flute is a transverse (side-blown) woodwind instrument made of metal or wood. It is the most common variant of the flute. A musician who plays the flute is called a flautist, flutist, flute player, or (rarely) fluter.

Symphony No. 5 by Gustav Mahler was composed in 1901 and 1902, mostly during the summer months at Mahler's holiday cottage at Maiernigg. Among its most distinctive features are the trumpet solo that opens the work with a rhythmic motive similar to the opening of Ludwig van Beethoven's Symphony No. 5, the horn solos in the third movement and the frequently performed Adagietto.

A septet is a formation containing exactly seven members. It is commonly associated with musical groups, but can be applied to any situation where seven similar or related objects are considered a single unit, such as a seven-line stanza of poetry.

Prometheus: The Poem of Fire, Op. 60 (1910), is a symphonic work by the Russian composer Alexander Scriabin for piano, orchestra, optional choir, and clavier à lumières or "Chromola". Prometheus is only loosely based on the myth of Prometheus. A typical performance lasts about 20 minutes.

Till Eulenspiegel's Merry Pranks, Op. 28, is a tone poem written in 1894–95 by Richard Strauss. It chronicles the misadventures and pranks of the German peasant folk hero Till Eulenspiegel, who is represented by two themes. The first, played by the horn, is a lilting melody that reaches a peak, falls downward, and ends in three long, loud notes, each progressively lower. The second, for D clarinet, is crafty and wheedling, suggesting a trickster doing what he does best.

Death and Transfiguration, Op. 24, is a tone poem for large orchestra by Richard Strauss. Strauss began composition in the late summer of 1888 and completed the work on 18 November 1889. The work is dedicated to the composer's friend Friedrich Rosch.

Roman Festivals is a symphonic poem written in 1928 by the Italian composer Ottorino Respighi. It is the third orchestral work in his "Roman trilogy", preceded by Fountains of Rome (1916) and Pines of Rome (1924). Each of the four movements depict a scene of celebration from ancient or modern Rome. It is the longest and most demanding of the trilogy, and thus it is less-often programmed than its companion pieces. Its premiere was performed by the New York Philharmonic Orchestra with conductor Arturo Toscanini in 1929. 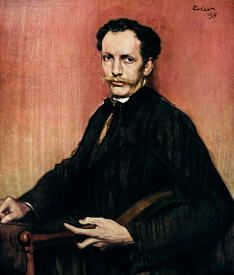 Ein Heldenleben, Op. 40 is a tone poem by Richard Strauss. The work was completed in 1898. It was his eighth work in the genre, and exceeded any of its predecessors in its orchestral demands. Generally agreed to be autobiographical in nature, despite contradictory statements on the matter by the composer, the work contains more than thirty quotations from Strauss's earlier works, including Also sprach Zarathustra, Till Eulenspiegel, Don Quixote, and Death and Transfiguration.

The Four Last Songs, Op. posth., for soprano and orchestra are – with the exception of the song "Malven" (Mallows), composed later the same year – the final completed works of Richard Strauss. They were composed in 1948 when the composer was 84.

Aus Italien, Op. 16, is a tone poem or program symphony for orchestra by Richard Strauss, described by the composer as a "symphonic fantasy". It was completed in 1886 when he was 22 years old. It was inspired by the composer's visit to Italy in the summer of the same year, where he travelled to Rome, Bologna, Naples, Sorrento, Salerno, and Capri. He began to sketch the work while still on the journey. 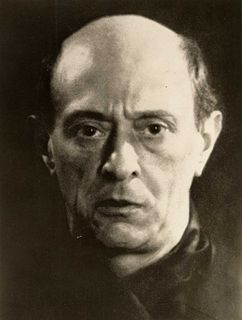 The Bachianas Brasileiras are a series of nine suites by the Brazilian composer Heitor Villa-Lobos, written for various combinations of instruments and voices between 1930 and 1945. They represent not so much a fusion of Brazilian folk and popular music on the one hand, and the style of Johann Sebastian Bach on the other, as an attempt freely to adapt a number of Baroque harmonic and contrapuntal procedures to Brazilian music. Most of the movements in each suite have two titles: one "Bachian", the other Brazilian.

The tone poems of Richard Strauss are noted as the high point of program music in the latter part of the 19th century, extending its boundaries and taking the concept of realism in music to an unprecedented level. In these works, he widened the expressive range of music while depicting subjects many times thought unsuitable for musical depiction. As Hugh MacDonald points out in the New Grove Dictionary of Music and Musicians, "In the years prior to World War I these works were held to be in the vanguard of modernism."

"Ruhe, meine Seele!", Op. 27, No. 1, is the first in a set of four songs composed by Richard Strauss in 1894. It was originally for voice and piano, and not orchestrated by Strauss until 1948, after he had completed one of his Four Last Songs, "Im Abendrot". The words are from a poem "Ruhe, meine Seele!" written by the poet Karl Henckell.

Richard Gibson is a Canadian composer of contemporary classical music, and Professor of Composition at the Université de Moncton in New Brunswick.