Murchison East is a small town in Victoria, Australia. It is located in the City of Greater Shepparton. At the 2016 census, Murchison East had a population of 135. [1]

The Shire of East Gippsland is a local government area in Gippsland, Victoria, Australia, located in the eastern part of the state. It covers an area of 20,931 square kilometres (8,082 sq mi) and at the 2016 Census had a population of approximately 45,000. 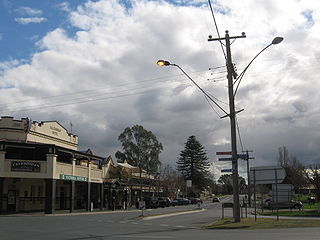 Cue is a small town in the Mid West region of Western Australia, located 620 km north-east of Perth. At the 2016 census, Cue had a population of 178. It is also known as the Queen of the Murchison. Cue is administered through the Cue Shire Council, which has its chambers in the historic Gentlemans Club building. The current president is Ross Pigdon. The Cue Parliament is held twice yearly in May and November. 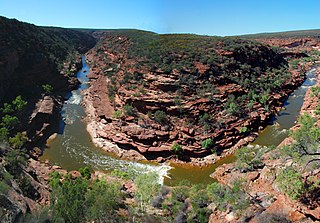 The Murchison River is the second longest river in Western Australia. It flows for about 820 km (510 mi) from the southern edge of the Robinson Ranges to the Indian Ocean at Kalbarri. The Murchison-Yalgar-Hope river system is the longest river system in Western Australia. It has a mean annual flow of 208 gigalitres, although in 2006, the peak year on record since 1967, flow was 1,806 gigalitres.

East Warburton is a town in Victoria, Australia, 67 km east from Melbourne's central business district. Its local government area is the Shire of Yarra Ranges. At the 2016 census, East Warburton had a population of 864. 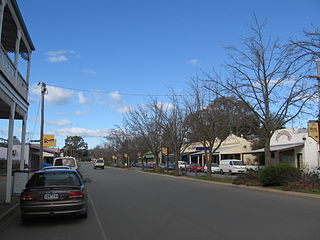 Violet Town is a town in northeastern Victoria, Australia. The town is in the Shire of Strathbogie local government area, 174 kilometres (108 mi) northeast of the state capital, Melbourne on the Hume Highway. At the 2016 census, Violet Town and district had a population of 1,540. 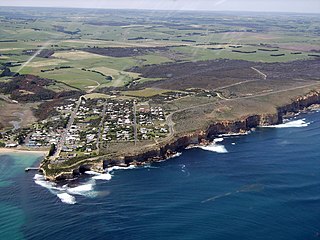 Port Campbell is a coastal town in Victoria, Australia. The town is on the Great Ocean Road, west of the Twelve Apostles, in the Shire of Corangamite. At the 2016 census, Port Campbell had a population of 478.

Murchison Falls National Park (MFNP) is a national park in Uganda and managed by the Ugandan Wildlife Authority. It is in north-western Uganda, spreading inland from the shores of Lake Albert, around the Victoria Nile, up to the Karuma Falls.

Kalbarri is a coastal town in the Mid West region located 592 km (368 mi) north of Perth, Western Australia. The town is found at the mouth of the Murchison River and has an elevation of 6 metres (20 ft). It is connected by public transport to Perth via Transwa coach services N1 and N2.

Taradale is a small town in Victoria, Australia. It is located beside the Calder Highway between Melbourne and Bendigo. Its local government area is the Shire of Mount Alexander. At the 2016 census, Taradale had a population of 448. 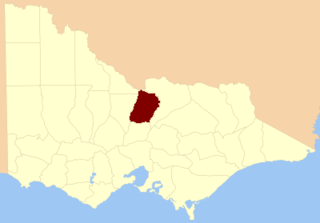 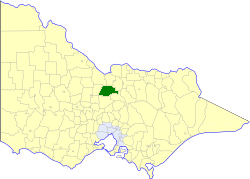 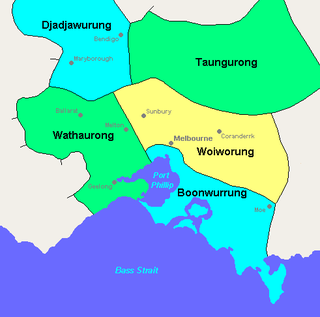 Djadjawurrung is one of the extinct Indigenous Australian languages spoken by the Jaara also known as Dja Dja Wurrung people of the Kulin Nation of Central Victoria. Djadjawurrung was spoken by 16 clans around Murchison, the central highlands region, east to Woodend, west to the Pyrenees, north to Boort and south to the Great Dividing Range. 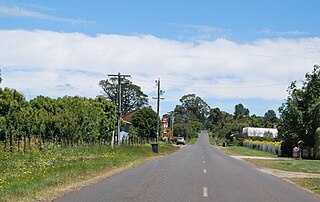 Trentham East is a locality in central Victoria, Australia. The locality is in the Shire of Macedon Ranges local government area, 87 kilometres (54 mi) north west of the state capital, Melbourne.

Wivenhoe is a locality and suburb of Burnie in the local government area of City of Burnie, in the North West region of Tasmania. It is located about 3 kilometres (1.9 mi) south-east of the town of Burnie. The Bass Highway passes from east to west along the shore of Bass Strait, the northern boundary. The Emu River forms the western boundary. The 2016 census determined a population of 220 for the state suburb of Wivenhoe.