Cosgrove South is a small town in Victoria, Australia. It is located in the City of Greater Shepparton. At the 2016 census, Cosgrove had a population of 58. [1] 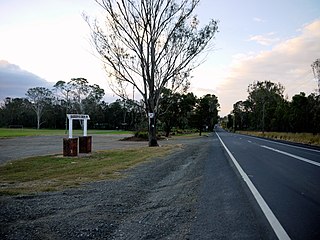 Badgerys Creek, also known as Badgery's Creek, is a suburb of Sydney, in the state of New South Wales, Australia, located approximately 41 kilometres (25 mi) west of the Sydney central business district, in the local government areas of the City of Liverpool. It is part of the Greater Western Sydney region and is adjacent to the suburbs of Kemps Creek and Austral.

Glenorchy is a city near Hobart, in the state of Tasmania, Australia. Glenorchy is bound by the River Derwent to the east, Mount Wellington to the west, Hobart City to the south and Brighton to the north. The city officially begins at Creek Road New Town, in Hobart's northern suburbs, and includes, Moonah, Derwent Park, Lutana, Goodwood, Montrose, Rosetta, Berriedale, Chigwell, Claremont and Austins Ferry. It is the seat of the local government area of the same name, the City of Glenorchy. 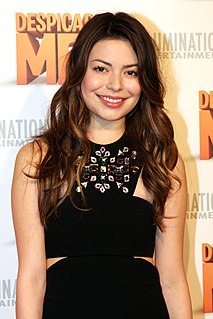 Miranda Taylor Cosgrove is an American actress and singer. Her career began at the age of seven with several television commercial appearances. Cosgrove's film debut came in 2003, when she appeared as Summer Hathaway in School of Rock. She appeared in a number of minor television roles over several years before coming to prominence as Megan Parker on the Nickelodeon television series Drake & Josh. In 2007, she landed the role of Carly Shay, the lead character on the Nickelodeon teen sitcom iCarly, on which she starred until 2012. As of May 2010, Cosgrove earned $180,000 per episode of iCarly, making her the second-highest-paid child star on television, and in 2012 was listed in the Guinness World Records as the highest paid child actress. Cosgrove also voiced Margo in the animated film Despicable Me (2010) and its sequels. In 2016, she starred as Shea Moore on the short-lived NBC sitcom Crowded.

General Sir Peter John Cosgrove, is a retired senior Australian Army officer who served as the 26th Governor-General of Australia, in office from 2014 to 2019.

Kemps Creek is a suburb of Sydney, in the state of New South Wales, Australia. It is approximately 39 kilometres (24 mi) west of the Sydney central business district, in the local government areas of the City of Penrith and City of Liverpool. It is part of the Greater Western Sydney region. 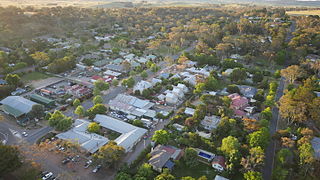 Hall is a township in the north of the Australian Capital Territory, Australia. At the 2016 census, the village had a population of 271 people. It is surrounded by open country and has a rural appearance. Hall has retained a village character. The township features historic buildings that existed before the establishment of Canberra.

Mark James Cosgrove is a former Australian ODI cricketer and a first-class cricketer. He is a left-handed batsman and part-time medium pace bowler. In 2005 Cosgrove was named the Bradman Young Player of the Year. Nevertheless, he was dropped from the state squad in early 2005 because of claims that he was overweight, but was reinstated a few months later.

The following lists events that happened during 1948 in Australia.

Aghada is a small town in East Cork situated to the south-east of Cork city in County Cork, Ireland.

Australia–Chile relations are foreign relations between Australia and Chile. Both nations enjoy friendly relations, the importance of which centers on the history of Chilean immigration to Australia. In 2016, over 26,000 Chilean-born people lived in Australia. Both nations are members of the Asia-Pacific Economic Cooperation, Cairns Group and the OECD. 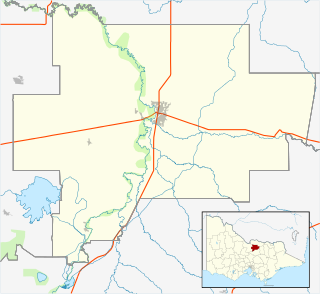 Cosgrove is a small town in Victoria, Australia. It is located in the City of Greater Shepparton. At the 2016 census, Cosgrove had a population of 54.