Katandra is a small town in Victoria, Australia. It is located in the City of Greater Shepparton. It is the hometown of David Teague (footballer) coach of the Carlton Football Club

Margaret Court, also known as Margaret Smith Court, is a retired Australian tennis player and former world No. 1. She is currently a Christian minister in Perth, Western Australia.

Colin Reid Miller is an Australian former cricketer who played 18 Tests for Australia between 1998 and 2001.

The Picola & District Football Netball League is an Australian rules football and netball league affiliated with the AFL Victoria Country.

Philip Ian Hodgins was an Australian poet, whose work appeared in such major publications as The New Yorker. Peter Rose called him 'probably the most loved [Australian] poet of his generation', noting that 'his admirers ranged from... Alan Hollinghurst to Ron Barassi and Peter Porter to Les Murray'. Clive James ventured that 'if he had lived as long as his admired Goethe, he would probably have been Goethe', although it must be said that he was receiving the Philip Hodgins Memorial Medal at the time.

Les D. Bartlett is a former Australian rules footballer. He played with Footscray, now known as the Western Bulldogs, in the Victorian Football League (VFL) mostly as a half-back flanker. He was recruited from Katandra in the Picola & District Football League. His playing measurements were 188 cm and 88 kg, which for the time would have been considered tall for a flanker.

The Katamatite Football Netball Club, nicknamed the Tigers, is an Australian rules football and netball club based in the small Victorian town of Katamatite.

The Katandra Football Club, nicknamed the Kats, is an Australian rules football and netball club based in the small Victorian town of Katandra West. The club teams currently compete in the Murray FNL.

The Murray Football Netball League is an Australian rules football and netball league affiliated with the Victorian Country Football League. The league covers a large area of northern Victoria and southern New South Wales from Shepparton in the south to Deniliquin in the north. 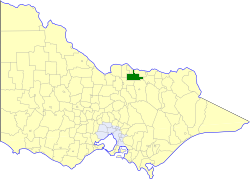 The Shire of Tungamah was a local government area in the Goulburn Valley region about 240 kilometres (149 mi) northeast of Melbourne, the state capital of Victoria, Australia. The shire covered an area of 1,143 square kilometres (441.3 sq mi), and existed from 1878 until 1994.

Derek Hall is a former Australian rules footballer who played with the West Coast Eagles and Geelong in the Australian Football League (AFL).

Edwin "Eddie" Ford was an Australian rules footballer who played with Richmond in the Victorian Football League (VFL) during the 1940s.

Abbotsford Station is a 20,000 acres (8,100 ha) mitchell grass downs block near Stamford, Queensland, Australia. The block was balloted on the 7 November 1912 off the Stamfordham block of the home station of Katandra. It was the western portion of the block called Sloane Creek, so named after the creek that runs through the block and into the Flinders River. This block also had a sub-artesian bore which was situated centrally on the land making it the prime block in the 1912 ballot process.

Annandale Station most commonly known as Annandale is a pastoral lease that operates as a cattle station in central west Queensland. It is located on the tribal lands of the Wongkamala. 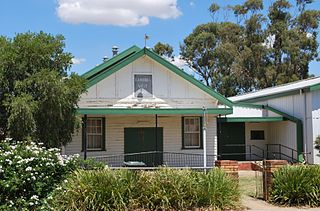 Katandra West is a small town in Victoria, Australia. It is located in the City of Greater Shepparton. At the 2016 census, Katandra West had a population of 476.