The Nimrod NRA/C2 was the only Group C racing car ever built by Nimrod Racing Automobiles in partnership with Aston Martin. It ran initially in 1982 in the World Endurance Championship before also joining the IMSA GT Championship. The final NRA/C2 would be retired in 1984 after the planned NRA/C3 replacement had been cancelled and the company went bankrupt.

Beginning in 1981, Robin Hamilton hastily constructed a chassis for use as a test vehicle in preparation for competition in the 1982 season. This lone car, known as NRA/C1, was used to test design and mechanical features for the upcoming race car, the NRA/C2.

For an engine, Aston Martin turned to their tuning arm Tickford for the development of a racing version of their production V8 engines seen in the V8 and V8 Vantage models. This engine, becoming known as "Development Prototype 1229" (DP1229), retained the same basic displacement of 5340 cc while being strengthened in order to handle the increased output.

Eric Broadley of Lola Cars International designed the chassis of this new car, since he had experience already with the Aston Martin V8 engine fitted into the 1967 Lola T70. Since Lola constructed the basic tub, this earned it the designation "T385", although "NRA/C2" was the car's official name. The chassis was a simple, low design that featured a large air opening in the nose similar to an Aston Martin grill shape. Large side vents built into the doors would also be used.

Ray Mallock would later evolve the NRA/C2's design into a B-spec model for the 1983 season. These modifications included squared off front fenders, a thinner tail, and the removal of the vents in the doors. Small vertical exhaust vents would be added behind the front wheel well.

Debuting at the 1000 km of Silverstone, the two chassis were entered by Nimrod themselves, although only one actually raced. A third chassis that was also completed at the time had been sold to the owner of the Aston Martin Owners Club, John Dawnay, who ran the Viscount Downe Racing team as a privateer entry. Viscount Downe would be the more successful of the two, as they finished in sixth place at Silverstone, fourth in the Group C class. This was followed by the team taking seventh place at the 24 Hours of Le Mans, again fourth in class. The factory team would take an eleventh at Spa while Viscount Downe would take ninth at Brands Hatch. These successes for both Nimrod and Viscount Downe earned Nimrod and Aston Martin third place in the World Endurance Championship for Manufacturers.

For 1983 Nimrod Racing would turn to the IMSA GT Championship in North America with two cars evolved into the B-spec bodywork, while EMKA Racing would take over Aston Martin's efforts in Europe with their own Group C car. Viscount Downe would remain in the World Endurance Championship with their lone entry as a privateer. Nimrod suffered throughout the season in North America, earning their only success as the 12 Hours of Sebring with a fifth-place finish, third in the GTP class. For the rest of the season the NRA/C2 would struggle to finish and Nimrod was forced to abandon the series towards the end of the year. One NRA/C2 was sold to Jack Miller's privateer team while Nimrod returned to Europe. Miller's Performance Motorsports finished off the season with an eighth-place finish at the Daytona Finale. Even with the troubles, Aston Martin took fifth in the GTP constructors championship.

Upon returning to Europe, Nimrod Racing Automobiles was forced to close its doors due to financial troubles, ending the short life of the project.

Privateer Viscount Downe had a similarly bad season in the World Endurance Championship, with a seventh-place result early in the season at Silverstone being their only race finish. Even with just one finish, Aston Martin-Nimrod once again took third in the Makes title.

Viscount Downe would attempt to continue in the World Endurance Championship for 1984, even adding the last NRA/C2 chassis built before Nimrod folded. First appearing at the IMSA GT 24 Hours of Daytona, the team would manage seventh- and sixteenth-place finishes. However, upon returning to Europe, neither car would finish at Silverstone. For the 24 Hours of Le Mans, both Nimrods were eliminated in a single incident on the Mulsanne Straight, with John Sheldon hitting the barriers in the first car and Mark Olson in the second car colliding with the wreckage. A track marshal was killed in the incident. Both cars were burned beyond repair, forcing Viscount Downe to pull out of the championship and end the program.

Jack Miller's Performance Motorsports would also attempt to continue in IMSA GT before it too would be abandoned without a finish to its credit.

Included are a list of finishes by each chassis.

A new chassis had also been under development in 1983, known as NRA/C3. Only a chassis tub and basic windtunnel testing had been completed before Nimrod Racing Automobiles was forced to close. This chassis, NRA/C3 006 is still in existence but has never been fully built.

Nimrod Racing Automobiles was a partnership founded in 1981 between racing driver and car dealer Robin Hamilton and chairman of Aston Martin Lagonda, Victor Gauntlett. The project was intended to build sports prototypes for the World Endurance Championship and IMSA GT Championship using Aston Martin V8 engines. Although Aston Martin did not own the project, they offered their support for the chance to see success for their name in motorsports without the heavy cost of running their own team.

EMKA Racing was a British racing team founded in 1980 by Steve O'Rourke, manager of the band Pink Floyd. The team occasionally ran under the name of EMKA Productions, the name of O'Rourke's management company. The team's name comes from O'Rourke's two daughters, Emma and Katheryne. O'Rourke and EMKA concentrated on sports car racing with brief interludes into British Formula One until 1985 when the team was broken up before returning again in 1991. The team was finally dissolved in early 2004 following O'Rourke's death. The team had won the drivers championship for O'Rourke and Tim Sugden in the British GT Championship in 1997 and 1998.

The Chevrolet Corvette C5-R is a grand touring racing car built by Pratt & Miller and Chevrolet for competition in endurance racing. The car is based on the C5 generation of the Chevrolet Corvette sports car, yet is designed purely for motorsports use. It became one of the most successful cars in GT categories, with wins at the 24 Hours of Daytona, 12 Hours of Sebring, and 24 Hours of Le Mans, as well as championships in the American Le Mans Series. The Corvette C5-Rs debuted in 1999 and continues to be raced to this day in vintage racing events, although the C5-R has effectively been replaced by the Corvette C6.R.

Joest Racing is a sports car racing team that was established in 1978 by former Porsche works racer Reinhold Joest. The headquarters are in Wald-Michelbach, Germany.

The Aston Martin DP212 was a prototype sports car developed by Aston Martin for use in the 1962 24 Hours of Le Mans.

The Chevrolet Corvette C6.R is a grand tourer racing car built by Pratt & Miller and Chevrolet for competition in endurance racing. It is a replacement for the Corvette C5-R racing car, applying the body style of the new C6 generation Chevrolet Corvette as well as improvements to increase the speed and reliability on the track. Since its debut in 2005, it has continued on from the previous dominance of the C5-R in its racing class with multiple American Le Mans Series championships and race wins in the Le Mans Series, FIA GT Championship, and 24 Hours of Le Mans. There are two main versions of the Corvette C6.R: the GT1 version which has 590 HP, carbon ceramic brakes and aggressive aerodynamics, and the GT2 version which has 470 HP, iron brakes and relatively stock aerodynamics with respect to the road car. By 2012 the C6.R GT1 was retired from competition while the GT2 version continues to race around the world. 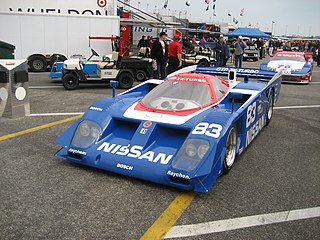 The Nissan GTP ZX-Turbo was a series of racing cars developed for Nissan Motors by Electramotive Engineering to compete in the IMSA GT Championship. Running from 1985 to 1990, they were known for being the first car to defeat the Porsche 962 which had dominated IMSA's premiere GTP category. This led to Nissan winning the constructor's championship and 12 Hours of Sebring in 1989 and 1990. During 1990, the GTP ZX-Turbo were replaced by the newer NPT-90.

The Nissan NPT-90 was a racing car developed in 1990 for Nissan Motors by Nissan Performance Technology Incorporated (NPTI), formerly known as Electramotive Engineering. It was a replacement for the highly successful GTP ZX-Turbo that had won the IMSA GT Championship in 1989. The NPT-90 would go on to win the championship in 1990 and 1991 before being retired by Nissan at the end of the 1992 season.

The Chrysler Viper GTS-R was a successful racing variant of the Dodge Viper developed in conjunction with Chrysler of North America, Oreca of France, and Reynard Motorsport of the United Kingdom. Officially unveiled at the 1995 Pebble Beach Concours, it has won numerous championships and famous events in its history. Some chassis are still in use today.

John Fitzpatrick is a former English racing driver, winning many titles throughout his career. He works within motorsport as a consultant doing corporate events and driver management. He published a book "Fitz-My Life at the Wheel" in 2016.

The EMKA Aston Martin was a Group C racing car built for EMKA Production's owner Steve O'Rourke by Michael Cane Racing and powered by an Aston Martin engine. The EMKA C83/1 was initially introduced in 1983 and competed in the 1983 24 Hours of Le Mans, finishing a respectable 17th overall. The car was modified for 1985 and raced at the 1985 24 Hours of Le Mans and finished in 11th place after briefly leading the race in the opening hours.