The eastern point of the neighbourhood was a traditional gathering place for Aboriginal tribes for ceremonial rites (while The Forks nearby was traditionally used for trading purposes). This is believed to have occurred prior to European contact, and continued until urbanization in the 1870s.

In 1812, this first group of Selkirk Settlers arrived in Point Douglas and began raising wheat crops on the point and along the Red River, becoming the first agrarian colony west of the Great Lakes.

As the Red River Colony (as the Winnipeg region was known) grew, a small cluster of commercial establishments developed on the Fort Garry road at Point Douglas by 1862, notably those of William Fonseca and Edmond Barber. After the incorporation of the City of Winnipeg in 1873, Point Douglas developed as a neighbourhood. Several notable citizens resided there, including merchant James Ashdown and Manitoba premier John Norquay. Among the houses of these men, there developed more modest cottages, industry such as Brown and Rutherford, a lumber company established in Point Douglas in 1872.

In 1881, Point Douglas was selected as the location that the Canadian Pacific Railway would cross the Red River. This move solidified Point Douglas as a choice location for industrial firms, who could take advantage of proximity to the railway. With the railroad completed by 1885, Winnipeg experienced an intense period of growth, and by 1914, Point Douglas had become a densely populated working-class neighbourhood, with many immigrants from Eastern Europe.

North Point Douglas continues to be primarily a residential neighbourhood but is also home to commercial and light industrial uses, with industry located mainly on the south side of the neighbourhood along the CPR tracks and commercial establishments on the western side, along Main Street, one of the city's busiest thoroughfares.

North Point Douglas is immediately north of Downtown Winnipeg and is considered part of Winnipeg's inner city. It has faced many of the same challenges that have characterized the North American city in the postwar decades: population and economic decline, crime, drug abuse, and a lack of investment. In recent years, the neighbourhood has begun to stabilize by efforts by community groups like the Point Douglas Residents Committee and North End Community Renewal Corporation and through new and long-time residents renovating properties.

Ross House had its beginnings in 1852 when construction commenced on William Ross's log home. The museum was moved to its current location at 140 Meade Street (Joe Zuken Heritage Park, Point Douglas) in 1984. The construction of Ross House is a prime example of a Red River frame building. [1] 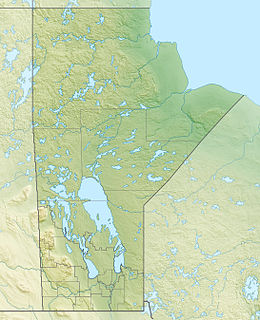 Lake Winnipeg is a very large, relatively shallow 24,514-square-kilometre (9,465 sq mi) lake in North America, in the province of Manitoba, Canada. Its southern end is about 55 kilometres (34 mi) north of the city of Winnipeg. Lake Winnipeg is Canada's sixth-largest freshwater lake and the third-largest freshwater lake contained entirely within Canada, but it is relatively shallow excluding a narrow 36 m (118 ft) deep channel between the northern and southern basins. It is the eleventh-largest freshwater lake on Earth. The lake's east side has pristine boreal forests and rivers that were in 2018 inscribed as Pimachiowin Aki UNESCO World Heritage Site. The lake is 416 km (258 mi) from north to south, with remote sandy beaches, large limestone cliffs, and many bat caves in some areas. Manitoba Hydro uses the lake as one of the largest reservoirs in the world. There are many islands, most of them undeveloped. 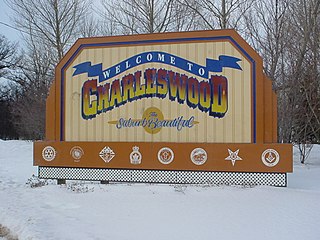 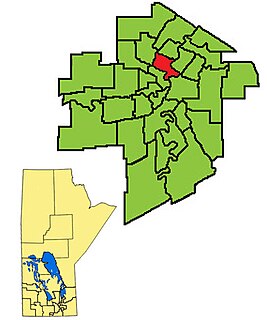 Point Douglas is a provincial electoral district in Winnipeg, Manitoba, Canada. It is named for a part of the city that is surrounded by a bend in the Red River. The riding covers the neighbourhoods of William Whyte, Dufferin Industrial, North Point Douglas, Lord Selkirk Park and South Point Douglas plus parts of St. John's Park, St. John's, Inkster-Faraday, Burrows Central, Robertson, Dufferin, Logan C.P.R., Civic Centre and the Exchange District. 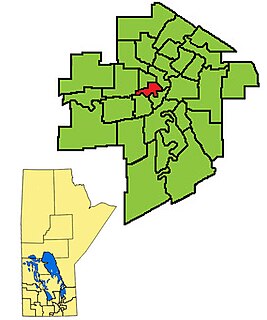 Wolseley is a provincial electoral division in the Canadian province of Manitoba. It was created by redistribution in 1957, and has formally existed since the 1958 provincial election. The riding is located in the centre of the City of Winnipeg. It is named for Col. Garnet Joseph Wolseley, the nineteenth-century army officer who played a significant role in crushing the Red River Rebellion in 1870. 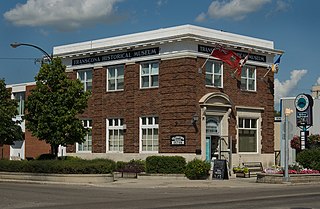 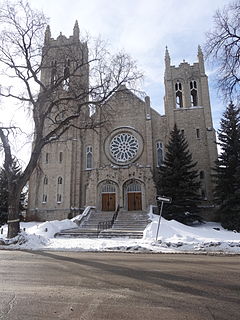 Elmwood is a primarily working class residential area of Winnipeg, Manitoba. It is the only part of the historic city of Winnipeg located east of the Red River. 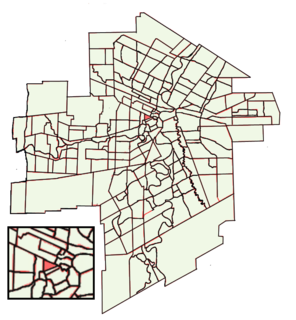 Linden Woods is a neighbourhood in the southwest corner of city of Winnipeg, Manitoba, Canada a part of the Fort Garry North neighbourhood cluster. The first phase was designed by IDE in 1980. The construction of houses began in 1982.

Centennial is an inner-city neighbourhood located Winnipeg, Manitoba, Canada, in the Downtown East Neighbourhood Cluster. The boundaries of Centennial are Sherbrook Street on the west, Logan Avenue on the north, William Avenue on the south and Stanley, Paulin and Adelaide streets on the east.

Richmond West is a suburb in southwest Winnipeg, Manitoba. Richmond West was originally part of the Rural Municipality of Fort Garry, Winnipeg which was incorporated in 1912. On January 1, 1972 Fort Garry legally became part of the City of Winnipeg. As of the 2016 Census it has a population of 8,605.