Old East is a residence hall located at the north part of campus in University of North Carolina at Chapel Hill. When it was built in 1793, it became the first state university building in the United States. [2] The Wren Building at the College of William & Mary in Williamsburg, Virginia, was built in 1695, but William and Mary did not become a public university until 1906. [3]

Colonel John Hogan, entered into a contract December 1792, to make 150,000 bricks at the site of where Old East would be built. [4] He also donated 200 acres towards the University grounds. [5] The cornerstone of Old East was laid ceremoniously on October 12, 1793 by William Richardson Davie, who served as the governor of North Carolina from 1798 to 1799. [6] The building was originally two stories tall and contained sixteen rooms. The design reflects the University trustees' vision of a quadrangle that ran north toward the town of Chapel Hill. Although the cost of construction is unknown, there are records from 1799 indicating that the University spent a total of $12,180 for work on Steward's Hall, Old East, Person Hall, and the President's House. After its construction, Old East functioned as both a classroom building and a Residence Hall; today it is exclusively a Residence Hall.

The contractor in charge of the construction of Old East was James Patterson of Chatham County. By 1804, the building needed significant repairs and was renovated with new doors, window sashes, ladders, and the roof was repainted. The third story was added to the building in 1823. Alexander Jackson Davis was hired by the University in 1844 to lengthen the building by a third and to create a new north entrance. The new rooms were used by the Philanthropic Society and also served as a library. Davis' other additions included large north-facing windows encased by brick panels and two brick porches on the east side of the building. Thomas Day, a skilled and respected African-American cabinetmaker, designed and built the interior woodwork in the society rooms. Old East remained the home of the Philanthropic Society until New East was completed in 1860. [7]

In 1877, Zebulon Baird Vance, the Governor of North Carolina and chair of the Board of Trustees, declared the anniversary of Old East's construction, October 12, was University Day and should "be observed with appropriate ceremonies under the direction of the faculty." [8] Subsequent celebrations of University Day have included speeches by President John F. Kennedy in 1961 and President Bill Clinton in 1993. Students are released from classes the morning of University Day and many migrate to the Old East Birthday Bash, which has in the past included things like cake, athletic signings, puppies, appearances by the chancellor, dance routines, and a capella performances. The building was designated a National Historic Landmark by the National Park Service December 21, 1965. [9] The residence hall is staffed with two Resident Advisers who are notorious for wearing striking safety vests during emergency procedures and in order to increase visibility on the hall.

The Old Well and Old East, as the earliest buildings at UNC, have long been the symbols of the university. There are some collections of art about Old East and the Old Well in Blowing Rock Art and History Museum, North Carolina, as well as in UNC-Chapel Hill's Wilson Library. It is located in the Chapel Hill Historic District.

Greensboro College is a four-year, independent, coeducational liberal-arts college in Greensboro, North Carolina. It is affiliated with the United Methodist Church and was founded in 1838 by Rev. Peter Doub. The college enrolls about 1,000 students from 32 states, the District of Columbia, and 29 countries. 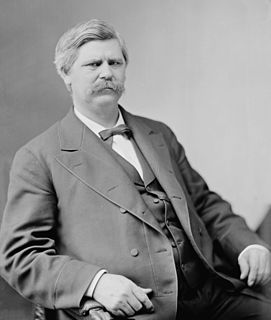 Zebulon Baird Vance was a Confederate military officer in the American Civil War, the 37th and 43rd Governor of North Carolina, and U.S. Senator. A prolific writer, Vance became one of the most influential Southern leaders of the Civil War and postbellum periods. As a leader of the "New South," Vance favored the rapid modernization of the Southern economy, railroad expansion, school construction, and reconciliation with the North.

The Old Well is a small, neoclassical rotunda located on the University of North Carolina at Chapel Hill campus at the southern end of McCorkle Place. The current decorative form of the Old Well was modeled after the Temple of Love in the Gardens of Versailles and was completed in 1897. It was designed by the university registrar Eugene Lewis Harris (1856-1901), an artist and 1881 graduate of the institution, who served as registrar from 1894 to 1901. It is the most enduring symbol of UNC.

Charles Johnson was a Congressional representative from North Carolina. Johnson was born in Scotland; engaged as a planter; elected to the Continental Congress in 1781, 1784, and 1785, but did not attend; served in the state senate in 1781–1784, 1788–1790, and 1792 ; elected as a Republican in a special election to the Seventh Congress ; interment in Edenton Cemetery. 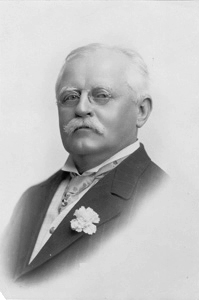 Connecticut Hall is a Georgian building on the Old Campus of Yale University. Completed in 1752, it was originally a student dormitory, a function it retained for 200 years. Part of the first floor became home to the Yale College Dean's Office after 1905, and the full building was converted to departmental offices in the mid-twentieth century. It is currently used by the Department of Philosophy, and its third story contains a room for meetings of the Yale Faculty of Arts & Sciences, the academic faculty of Yale College and the Graduate School. 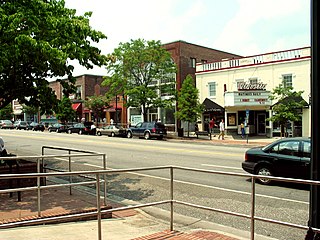 The Pope House Museum, built in 1901, is a restored home once owned by Dr. M. T. Pope, a prominent African-American citizen of Raleigh, North Carolina. The Pope House is listed on the National Register of Historic Places in 1999, It was an official project of the Save America’s Treasures Program and the city of Raleigh took over management of it, offering tours for the first time.

Peace College Main Building is the focal point of the Peace College campus in Raleigh, North Carolina. Built between 1859 and 1862, Main Building is located at the northern end of Wilmington Street in downtown Raleigh and is considered one of the largest antebellum buildings surviving in the city. During its early history, Main Building was used as a military hospital and offices for the Freedmen's Bureau. The building now contains offices, parlors, banquet rooms, and dormitory residences. Main Building was listed on the National Register of Historic Places in 1973 and is a designated Raleigh Historic Landmark. 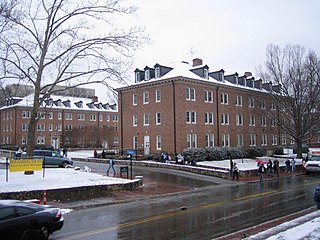 Over 8,000 undergraduate and graduate students live in campus housing at the University of North Carolina at Chapel Hill during a regular school year. Forty residence halls are grouped into 16 residential communities across campus.

The Unsung Founders Memorial at the University of North Carolina at Chapel Hill is a memorial located in McCorkle Place, one of the University's quads. It consists of a black granite tabletop supported by 300 bronze figurines and surrounded by 5 black stone seats. The inscription around the edge of the table reads:

The Class Of 2002 Honors The University's Unsung Founders – The People Of Color, Bond And Free – Who Helped Build The Carolina That We Cherish Today. 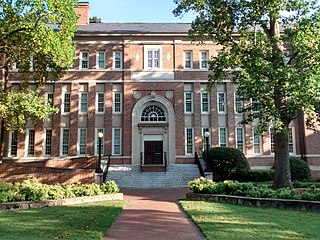 Carolina Hall, formerly known as Saunders Hall, is a building on the University of North Carolina at Chapel Hill campus in Chapel Hill, North Carolina, in the United States. Carolina Hall was built in 1922 and named for William L. Saunders, an alumnus and a colonel in the Confederate States Army during the American Civil War. The name was changed to "Carolina Hall" in 2015.

Young Men's Institute Building, also known as the YMI Building, is a historic meeting hall located at Asheville, Buncombe County, North Carolina. It was designed by architect Richard Sharp Smith and built in 1892-1893. It is a 2 1/2-story, pebbledash coated masonry building with brick, stone, and wood accents. From its early days, the YMI building has housed shops, residence rooms, meeting rooms, and a wide variety of functions serving the African American community of Asheville. The building was restored and reestablished as the YMI Cultural Center in 1980, and now hosts a variety of intercultural programs and events. It is located in the Downtown Asheville Historic District.

Memorial Hall was initially built in 1883 to be used for events like commencement ceremonies and the first ever basketball games at the University of North Carolina at Chapel Hill. The architect, Samuel Sloan, designed the building to be larger than the previously used Gerrard Hall so that it could hold up to 4,000 people. Memorial Hall was created to honor the men at the university who fought in the Civil War and to commemorate some of the important antebellum figures at the University of North Carolina. Specifically David L. Swain was one of the men honored in the making of the building. Funding for Memorial Hall was initially provided by selling marble tablets that were dedicated to certain men who fell in battle during the Civil War. The tablets still exist and are kept on display at the current Memorial Hall.