Oslo University Hospital (Norwegian : Oslo universitetssykehus) is a university hospital in Oslo, Norway. With over 24,000 employees it is one of the world's largest hospitals, and the largest in Northern Europe. [1] It is affiliated with the Faculty of Medicine of the University of Oslo and is one of the largest medical research institutions in Europe.

Its oldest predecessor, Rikshospitalet (The National Hospital), was established as Norway's national teaching hospital in 1826 mainly on the basis of the Military Hospital founded in 1807, while its academic tradition dates back to the establishment of the Faculty of Medicine in 1814. From the late 19th century the hospital was established as one of Europe's most modern hospitals and leading medical research institutions. Oslo University Hospital was formed by the merger of the then-three university hospitals in Oslo in 2009.The hospital includes 325 buildings that are primarily spread across four main campuses in Oslo: Rikshospitalet, Ullevål, Aker and Radiumhospitalet. It is one of two university hospitals affiliated with the University of Oslo, alongside Akershus University Hospital.

Oslo University Hospital was established on 1 January 2009 by the merger of three state-owned university hospitals in Oslo, all of which were affiliated with the University of Oslo:

Rigshospitalet (the pre-1907 spelling) was established as Norway's national teaching hospital affiliated with the university in 1826, mainly on the basis on the Military Hospital that had been established during the Napoleonic Wars in 1807. [2] Rigshospitalet also incorporated Akershus Regional Hospital, founded 1756. The hospital's academic tradition dates back to the establishment of the Faculty of Medicine of the Royal Frederick University in 1814, which itself was a continuation of the traditions of the University of Copenhagen and Rigshospitalet in Copenhagen following the 1814 Dano–Norwegian split. In the late 19th century the Norwegian Parliament decided to develop Rigshospitalet as a "model hospital" that would be comparable to the world's then-leading hospitals, such as Germany's Charité. As a result the hospital was massively expanded to become one of the most modern hospitals in the world, and a major research institution. Ullevål Hospital was established in 1887 and was a teaching hospital affiliated with the university from its very first years. During the 20th century Ullevål Hospital became Oslo's main municipal hospital, one of the largest hospitals in Scandinavia and a major medical research institution and teaching hospital. Aker Hospital was established in 1895 and became a teaching hospital affiliated with the university in 1948. Ullevål and Aker were transferred from the Oslo city government to the national government in 2002.Oslo University Hospital's predecessor institutions also include several specialized hospitals, such as the psychiatric hospital Gaustad Hospital (founded 1855), which was merged into Aker Hospital in 1996, and the Crown Princess Märtha Institute, Sophies Minde, the Hospital for Rheumatic Diseases, the Hospital for Epilepsy, the Hospital for Rehabilitation, Oslo Heart Centre and the Norwegian Radium Hospital, all of which were merged into Rikshospitalet.University of Oslo currently has two university hospitals, Oslo University Hospital and Akershus University Hospital. Oslo University Hospital is the oldest and largest of the two.[ citation needed ]

The hospital consists of fourteen medical divisions in addition to a central management unit, the director's office, and a division that provides non-medical services to the rest of the hospital. Bjørn Erikstein has been managing director since 2011.

The hospital has a total budget of NOK 22 billion (2017). Oslo University Hospital is an emergency hospital for East and Southern Norway and has national emergency cover. The hospital is furthermore responsible for ambulance services, the 113 emergency calls service (equivalent to 112, 999 or 911), air ambulance and patient transportation in Oslo and the County of Akershus. Oslo University Hospital is the largest teaching hospital in Norway and has a major role in the education of a large variety of health care personnel.

About 60% of the total medical research in Norwegian medical centres is carried out at Oslo University Hospital. The hospital is involved in extensive international and national network cooperation. [6] 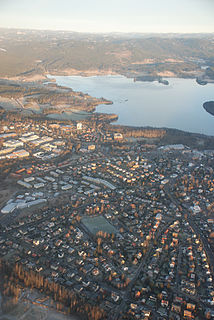 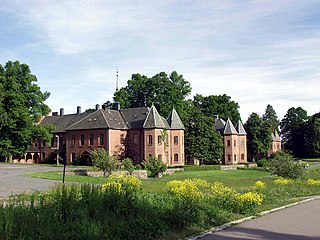 Akershus University Hospital is a Norwegian public university hospital in the Greater Oslo Region. It is located in the Lørenskog municipality in the region of Viken, northeast of the Norwegian capital Oslo. It is a teaching hospital and one of two university hospitals affiliated with the University of Oslo, alongside the larger Oslo University Hospital. The hospital has around 10,000 employees and a capacity of around 950 beds. In 2018, there were approximately 2,600 health, medical and nursing students in placements or internships within the hospital. 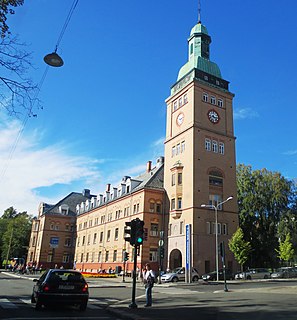 Oslo University Hospital, Radiumhospitalet is one of the four campuses of Oslo University Hospital in Oslo, Norway, and is dedicated to cancer treatment. This part of the hospital is the most specialized hospital in Norway for cancer therapy and research on cancer. The Norwegian Radium Hospital was an independent hospital from May 21, 1932 to 2005, when it merged with Rikshospitalet. The hospital was founded with Severin Andreas Heyerdahl as chief physician and director, and Hans L. C. Huitfeldt as chairman of the board. From 1983 to the merge with Rikshospitalet in 2005 Jan Vincents Johannessen was CEO. 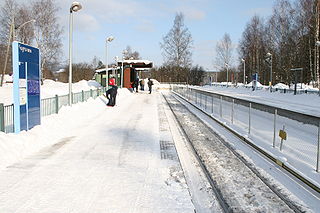 The Sognsvann Line is a rapid transit line on the Oslo Metro of Norway. It branches from the Common Tunnel at Majorstuen and runs 6.0 kilometers (3.7 mi) to Sognsvann. After Ullevål stadion, the Ring Line branches off. The Sognsvann Line serves the northwestern and northern neighborhoods of Oslo, mostly within the borough of Nordre Aker. The line is owned and maintained by Kollektivtransportproduksjon and has nine stations. The western end of line 5 serves the entire line. Line 4 and the eastern end of line 5 serve the southern part of the line up to Ullevål stadion before branching off and continuing along the Ring Line. This gives an average five-minute headway on the southern part and an average fifteen-minute headway on the northern part of the line.

Forskningsparken is a rapid transit station on the Sognsvann Line of the Oslo Metro. It also serves as a light rail station for the Ullevål Hageby Line of the Oslo Tramway. It is located at the north of the Blindern campus of the University of Oslo in the Nordre Aker borough of Oslo, Norway. The decision to build the station was made in 1998, and it opened in 1999, replacing the former station Vestgrensa, and allowed interchange between the metro and the tramway. The Ullevål Hageby Line was at the same time extended to serve the new Rikshospitalet. Forskningsparken is served by lines 4 and 5 of the metro, each operating every 15 minutes and providing services along both the Sognsvann Line and the Ring Line. Lines 17 and 18 of the tramway serve Forskningsparken, operating to Rikshospitalet and the city center.

The Ullevål Hageby Line is a light rail section of the Oslo Tramway. It runs from Stortorvet in the city center of Oslo, Norway to Rikshospitalet. It passes through the areas of St. Hanshaugen, Ullevål Hageby and Blindern before reaching Gaustad. It serves major institutions such as Oslo University College, Bislett Stadion, Ullevål University Hospital, the University of Oslo and Rikshospitalet. The line is served by route 17 and 18 by Oslo Sporvognsdrift using SL95 trams, while the tracks are owned by Kollektivtransportproduksjon.

The Norwegian Centre for Violence and Traumatic Stress Studies is a research centre in Oslo, Norway, and Norway's national research institution in violence and sexual abuse; disaster management, terrorism, armed conflicts and traumatic stress; and forced migration and refugee health research. It is interdisciplinary and employs experts mainly in psychology, psychiatry, and the social sciences. In addition to carrying out research and related activities, the institute advises the Government of Norway in its areas of expertise and has some official emergency management functions at the national level. NKVTS has 101 employees. 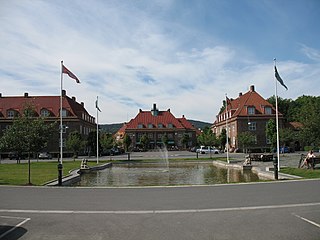 Ullevål Hageby is a residential area and garden city in borough Nordre Aker of Oslo, Norway. All housing in the area is part of the housing cooperative Oslo Havebyselskap. The area borders on Ullevål University Hospital to the east, Blindern in the west, and Berg to the north.

Rikshospitalet is a light rail tram stop at the end of the Ullevål Hageby Line of the Oslo Tramway. It is located at Rikshospitalet, the Norwegian National Hospital, at Gaustad in Oslo, Norway.

Magnus Andreas Thulstrup was a Norwegian surgeon. From 1814, he was a professor of surgery and obstetrics at the University of Oslo. From 1826, he was chief surgeon at Oslo University Hospital, Rikshospitalet. He served as a member of the commission for pharmaceutical legislation and The Norwegian Medical Society . He was one of the first professors at the University of Christiania. His background was in the military field cutting profession, which developed into modern-day anatomy and surgery. His military doctor's career culminated in 1819 with the position of Norwegian general surgeon.

Ingar Pettersen is a Norwegian consultant and former civil servant, with prominent positions in the health sector.

Stefan Kutzsche is a Norwegian paediatrician, anaesthesiologist, ethicist, and educationalist in the health professions. 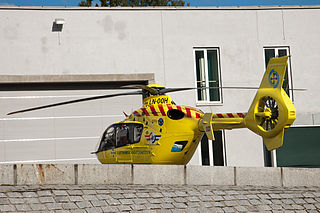 Lørenskog Heliport, Ahus is a heliport situated on the premises of Akershus University Hospital (Ahus) in Lørenskog, Norway. It serves as the main base for air ambulance helicopters in the central part of Eastern Norway. It is a base for a Eurocopter EC-135P2+ and a Eurocopter EC145 T2, both operated by Norsk Luftambulanse (NLA). The base became the first permanent ambulance heliport in the country when it opened in 1978. The facility is owned by Oslo University Hospital.

The Faculty of Medicine of the University of Oslo is the oldest and largest research and educational institution in medicine in Norway. It was founded in 1814, effectively as a Norwegian continuation of the Faculty of Medicine at the University of Copenhagen, the only university of Denmark-Norway until 1811. It was Norway's only medical faculty until the Cold War era. The faculty has around 1,000 employees, 2000 students and 1400 PhD candidates. The faculty is headquartered at Oslo University Hospital, Rikshospitalet, with important campuses at Oslo University Hospital, Ullevål and several other hospitals in the Oslo area.