The school is operated by Outwood Grange Academies Trust, the current principal is Andrew Downing. [1]

Before being renamed as The City School, in 1969, the Stradbroke Road establishment had been (1964–1969) City Grammar School (CGS). CGS itself had previously occupied premises in Sheffield city centre where, until 1941, it had been the Sheffield Pupil Teacher Centre (SPTC). The original institution dates from the 1890s.

The Elementary Education Act 1870, commonly known as Forster's Education Act, set the framework for schooling of all children between the ages of 5 and 13 in England and Wales and established local School Boards. The main function of these bodies was to use local rates (taxes) to finance the building of schools in cases where the range of existing establishments was inadequate. A driving force behind the Act was a perceived need for Britain to remain competitive in the world by being at the forefront of manufacture and improvement. The only existing formal education until this time had been in Church schools and some ragged schools for the poor. Between 1870 and 1880, 3,000–4,000 schools were started or taken over by school boards.

The resulting new schools consequently required larger numbers of teachers. Furthermore, higher standards of educational attainment came to be expected in schools, so the quality of the teachers also needed to be raised. It became necessary, therefore, to develop efficient and affordable methods of improving the standards of teacher training. The solution adopted, along the 1870s, 80s and 90s, was the education of "pupil teachers" for a four-year period (14–18 years of age) in specific training Centres. [2]

In Sheffield, the number of such Centres peaked at 11 establishments in the period 1881 to 1884, but it was later decided that the system would become more efficient with the centralisation of teacher training activities of this type in just one Centre. In 1894 the School Board purchased the premises formerly occupied by the old Free Writing School in School Croft, in the city centre, and in February of that year Mr. J. G. Picknet became head of the "Central Higher School". Two years later it was decided that this old building should be scheduled for demolition and that a new Centre should be constructed at a nearby site at the corner of Orchard Lane and Holly Street.

The new Sheffield Pupil Teacher Centre building was inaugurated on 9 October 1899 by Spencer Cavendish, 8th Duke of Devonshire. An Alumni Association, the "Holly Guild" was formed around 1904 and the first official number of the school magazine "The Holly Leaf: A Chronicle of the Sheffield City Grammar School" was printed in 1907 (up to this time it had been distributed in handwritten format).

Pupil numbers declined from 376 in 1906 to 143 in 1912, but subsequent rapid increases in the period 1915 to 1920 led to the necessity to contract thirteen additional members of staff and classes also had to be held at other premises at Carver Street, Townhead Street, Arundel Street (College of Arts and Crafts) and the Central School in addition to the Centre itself. In 1922 the Centre implemented an annual admission of four forms of boys and girls who had qualified via the 11-plus, and it effectively became a Secondary School. [3]

The idea of pupil-teachership lost support over the following two decades and Sheffield was one of the last two surviving urban authorities to maintain a Centre of this type. (The system was eventually discontinued in the city in 1944). The SPTC moved into premises at Orchard Lane on 11 September 1933 and changed its name to the City Secondary School shortly after the appointment of the new Head Master, Mr Northeast, in 1935. In 1941 it was again renamed, becoming City Grammar School.

The United Kingdom's secondary education structure was organised according to the Tripartite System between the 1944 Butler Education Act and 1976. This was known colloquially as the grammar school system. Secondary schools were divided into three categories, Grammar schools, Technical schools and Secondary Modern Schools. Pupils were allocated to each according to their performance in the 11-plus examination.

The new Sheffield City Grammar School adopted the Phoenix as its symbol and maintained the traditional SPTC school song "Carmen Ilicis", composed by Edward H. Taylor L.R.A.M. (music) and Alan W. Goodfellow, M.A. (lyrics), the first verse and chorus of which are:

The Oak, the Ash, the bonny Ivy tree Are known in story, famed in song ; But we who know thee, certain are That, search the woodland near or far, Ye ne'er will find, tho' seek ye long, A bush so worthy song or eulogy As Centre's Holly - ever green.

A reporter, writing about the City Grammar School in "Yorkshire Life" magazine, [4] in 1960 commented, "... to me it is one of the city's most interesting schools ... it was co-educational at a time when it was considered revolutionary for the sexes to mingle in class ... there is a solid, down-to-earth atmosphere about it that fits the character of the city, and its pupils have the friendliness and assurance one expects from Sheffield's hard-working, self-respecting citizens ... ".

The April 1969, Spring Edition of the Holly Leaf carried an editorial which began with "NOTICE IS HEREBY GIVEN...that the City Council of Sheffield propose to re-organise, from September 1969, the City Grammar School to form a co-educational comprehensive school." It continued, regarding the choice of a name for the new institute; "For a time we looked like becoming Bashforth School...good sense and the persistent efforts of the Head-master prevailed, and September will see the creation of City School." The editorial finishes; "Good luck, City School."

Between 2010 and 2012 as part of the Building Schools for the Future (BSF) programme the original 1964 concrete buildings were largely demolished and the 1969 extension buildings were comprehensively refurbished. A new three storey building was constructed by contractors 'Vinci' and located to the immediate East of the original site on fields that were previously used for hockey. The site of the 1964 building was converted into a multi-use games area (MUGA) and staff car parking.

High Storrs School is a mixed secondary school and sixth form college with academy status located on the south-western outskirts of Sheffield, England. The main school building is Grade II listed. It moved to its current site in 1933 and has stood there ever since. The school is often noted locally for the fact it doesn't have a set uniform, instead allowing students to wear what they like as long as it follows the dress code.

Harrogate Grammar School is a co-educational academy school and sixth form in Harrogate, North Yorkshire, England. It has around 1,900 pupils in the main school. A 2007 Ofsted inspection rated the school as Grade 1 "outstanding".

Outwood Academy Ripon is a small mixed secondary school with academy status situated in the city of Ripon, in North Yorkshire, England. It provides for children ages 11 to 16, and had an enrolment of 656 pupils in 2018.

Outwood Academy Freeston, formerly The Freeston Academy, is a state run, coeducational high school situated in Normanton, West Yorkshire near the city of Wakefield. It is a Business and Enterprise specialist school. 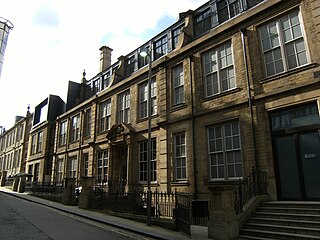 The former Sheffield Central Technical School (CTS) was housed in the collection of buildings now called Leopold Square in the city centre of Sheffield, South Yorkshire, England. The complex of buildings home to the school is bounded by Leopold Street, West Street, Orchard Lane, and Holly Street.

Selhurst High School for Boys is a name that has been given to two separate schools in England that existed at different times, but occupied the same site. The former school had been a grammar school that closed in 1988, the latter was the relaunch of a former comprehensive school, Ingram, under a different name in a different location. Thus, the current Selhurst High School for Boys is not simply an extension of the old school but rather has a more complex heritage. The school, located in the north of Croydon, is currently referred to as Selhurst Mathematics and Computing Specialist School. The school is notable not only in the eminent alumni that feature among its forerunners' former pupils, but also because of the dramatic contrasts in its academic fortunes over time.

Outwood Academy Easingwold is a mixed 11–18 secondary school with academy status in Easingwold, North Yorkshire, England. It had 915 pupils in 2017, including an on-site sixth form.

Newquay Tretherras is a secondary school with academy status in Newquay, Cornwall, England. The current headteacher is Samantha Fairbairn. The school first opened on 7 January 1954 and first secondary modern school to be built in Newquay.

Outwood Academy Redcar is a mixed secondary school with academy status located in Redcar, North Yorkshire. The school had 499 pupils enrolled in January 2017.

Outwood Academy Ormesby is a mixed secondary school with academy status, located in the Netherfields area of Middlesbrough, England. It has an enrolment of 900 pupils ages 11 to 16, with a comprehensive admissions policy.

Outwood Academy Adwick is a mixed secondary school and sixth form with academy status located in Woodlands, South Yorkshire, England. It has a comprehensive admissions policy, with 1,070 pupils on roll as of 2018.