The PEN/Faulkner Award for Fiction is awarded annually by the PEN/Faulkner Foundation to the authors of the year's best works of fiction by living American citizens. [1] The winner receives US$15,000 and each of four runners-up receives US$5000. Finalists read from their works at the presentation ceremony in the Great Hall of the Folger Shakespeare Library in Washington, D.C. The organization claims it to be "the largest peer-juried award in the country." [1] The award was first given in 1981. [2]

Mary Lee Settle was one of the founders of the PEN/Faulkner award following the controversy at the 1979 National Book Award, when PEN voted for a boycott on the grounds that the award had become too commercial. [2] [3] The award is affiliated with the writers' organization International PEN.

The award is one of many PEN awards sponsored by PEN International affiliates in over 145 PEN centres around the world. 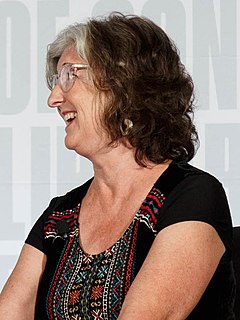 Barbara Kingsolver is an American novelist, essayist and poet. She was raised in rural Kentucky and lived briefly in the Congo in her early childhood. Kingsolver earned degrees in biology at DePauw University and the University of Arizona and worked as a freelance writer before she began writing novels. Her widely known works include The Poisonwood Bible, the tale of a missionary family in the Congo, and Animal, Vegetable, Miracle, a non-fiction account of her family's attempts to eat locally. 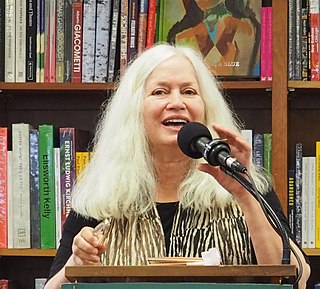 Amy Hempel is an American short story writer and journalist. She teaches creative writing at the Michener Center for Writers.

Fredrick Barthelme is an American novelist and short story writer, well-known as one of the seminal writers of minimalist fiction. Alongside his personal publishing history, his position as Director of The Center For Writers at The University of Southern Mississippi and editor of the nationally prominent literary journal Mississippi Review have placed him at the forefront of the contemporary American literary scene. He is currently the editor of New World Writing

Deborah Eisenberg is an American short story writer, actress and teacher. She is a professor of writing at Columbia University.

West Virginia University Press is a university press and publisher in the state of West Virginia. A part of West Virginia University, the press publishes books and journals with a particular emphasis on Appalachian studies, history, higher education, the social sciences, and interdisciplinary books about energy, environment, and resources. The press also has a small but highly regarded program in fiction and creative nonfiction, including Deesha Philyaw's The Secret Lives of Church Ladies, winner of the 2021 PEN/Faulkner Award for Fiction, winner of the 2020/21 Story Prize, winner of the Los Angeles Times Art Seidenbaum Award for First Fiction, and a finalist for the National Book Award for Fiction in 2020. John Warner wrote in the Chicago Tribune, "If you are wondering what the odds are of a university press book winning three major awards, being a finalist for a fourth, and going to a series on a premium network, please know that this is the only example." In 2021, another of WVU Press's works of fiction, Jim Lewis's Ghosts of New York, was named a New York Times Notable Book of the Year. WVU Press also collaborates on digital publications, notably West Virginia History: An Open Access Reader.

The Rea Award for the Short Story is an annual award given to a living American or Canadian author chosen for unusually significant contributions to short story fiction.

The PEN/Malamud Award and Memorial Reading honors "excellence in the art of the short story", and is awarded annually by the PEN/Faulkner Foundation. The selection committee is composed of PEN/Faulkner directors and representatives of Bernard Malamud's literary executors. The award was first given in 1988.

The Ambassador Book Award (1986–2011) was presented annually by the English-Speaking Union. It recognized important literary and non-fiction works that contributed to the understanding and interpretation of American life and culture. Winners of the award were considered literary ambassadors who provide, in the best contemporary English, an important window on America to the rest of the world. A panel of judges selected books out of new works in the fields of fiction, biography, autobiography, current affairs, American studies and poetry.

Joan Silber is an American novelist and short story writer. She won the 2017 National Book Critics Circle Award in Fiction and the 2018 PEN/Faulkner Award for Fiction for her novel Improvement.

The Georgia Review is a literary journal based in Athens, Georgia. Founded at University of Georgia in 1947, the journal features poetry, fiction, essays, book reviews, and visual art. The journal has won National Magazine Awards for Fiction in 1986, for Essays in 2007, and for Profile Writing in 2020. Works that appear in TheGeorgia Review are frequently reprinted in the Best American Short Stories and Best American Poetry and have won the Pushcart and O. Henry Prizes.

Atticus is a murder-mystery novel written by Ron Hansen in 1996. The main character, Atticus Cody, is similar to Atticus Finch of To Kill a Mockingbird.

PEN/Faulkner Foundation is an independent charitable arts foundation which supports the art of writing and encourages readers of all ages. It accomplishes this through a number of programs, including its flagship PEN/Faulkner Award for Fiction, one of the premier fiction awards in America; the PEN/Malamud Award for short fiction; and a number of educational and reading series programs. Since 1983 the Foundation's administration is housed at the Folger Shakespeare Library in Washington, D.C. The Foundation was established in 1980 by National Book Award winner Mary Lee Settle. Novelist Robert Stone served as the Chairman of the PEN/Faulkner Board of Directors for over thirty years beginning in 1982. 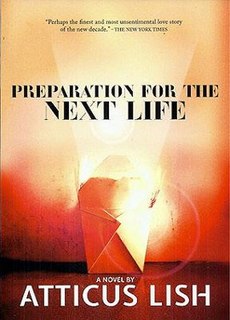 Preparation for the Next Life is a 2014 work of fiction by American author Atticus Lish. It won the 2015 PEN/Faulkner Award for Fiction, and the 2016 Grand Prix de Littérature Américaine.

Imbolo Mbue is a Cameroonian-American novelist and short-story writer based in New York City. She is known for her debut novel Behold the Dreamers (2016), which has garnered her the PEN/Faulkner Award for Fiction and the Blue Metropolis Words to Change Award. Her works draw from her own experiences as an immigrant, as well as the experiences of other immigrants. 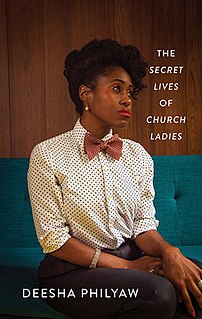 The Secret Lives of Church Ladies is a debut short story collection by Deesha Philyaw. The book contains nine stories about Black women, church, and sexuality and was released on September 1, 2020 by West Virginia University Press. It was a finalist for the 2020 National Book Award for Fiction and received The Story Prize, a Los Angeles Times Book Prize, and the PEN/Faulkner Award for Fiction.

Deesha Philyaw is an American author, columnist, and public speaker. Her debut short story collection, The Secret Lives of Church Ladies, was a finalist for the 2020 National Book Award in fiction and won The Story Prize. Her personal essay writing topics include race, sex, gender, and pop culture.