The station opened on 17 December 1969, as a premetro (underground tram) station on the tram line between De Brouckère and Schuman, and became a heavy metro station on 20 September 1976, serving former lines 1A and 1B. Following the reorganisation of the Brussels metro on 4 April 2009, it is served by lines 1 and 5, which cross Brussels from east to west.

Several places of interest other than the park itself lie near this station: the Royal Palace, the Belgian House of Parliament (Palace of the Nation), the office of the Prime Minister of Belgium, the Royal Park Theatre, and the United States' embassy.

When the station was first built, there was a plan to eventually construct a connecting line along the route of Rue Royale/Koningsstraat. To provide for this line, a much larger underground space was excavated than necessary for a simple station. The Rue Royale line was quickly cancelled, and the underground chambers intended for it now house the Brussels metro's traffic control centre. 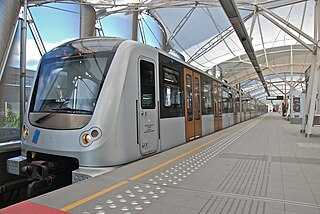 The Brussels Metro is a rapid transit system serving a large part of the Brussels-Capital Region of Belgium. It consists of four conventional metro lines and three premetro lines. The metro-grade lines are M1, M2, M5, and M6 with some shared sections, covering a total of 39.9 kilometres (24.8 mi), with 59 metro-only stations. The premetro network consists of three tram lines that partly travel over underground sections that were intended to be eventually converted into metro lines. Underground stations in the premetro network use the same design as metro stations. A few short underground tramway sections exist, so there is a total of 52.0 kilometres (32.3 mi) of underground metro and tram network. There are a total of 69 metro and premetro stations as of 2011.

The City of Brussels is the largest municipality and historical centre of the Brussels-Capital Region, and the capital of Belgium. Besides the strict centre, it also covers the immediate northern outskirts where it borders municipalities in Flanders. It is the administrative centre of the European Union, thus often dubbed, along with the region, the EU's capital city. 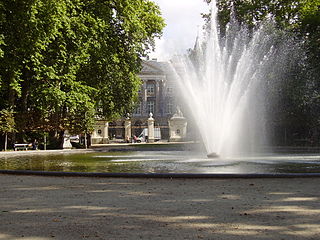 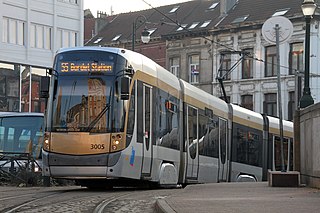 The Brussels tram system is a transport system in Brussels, Belgium. It is the 16th largest tram system in the world by route length, in 2017 providing 149.1 million journeys over routes 140.6 km in length. In 2018, the Brussels tram system consisted of 18 tram lines. Its development has demonstrated many of the quandaries that face local public transport planners. The Brussels tram system also has several interesting peculiarities: the inconsistent route pattern resulting from the closure of the interurban trams, the conflict between low-floor surface trams and high-floor underground trams, and whether the trams run on the right or the left.

Arts-Loi (French) or Kunst-Wet (Dutch) is a Brussels metro station. It is located in the City of Brussels (Belgium), under the intersection of Rue de la Loi/Wetstraat and Avenue des Arts/Kunstlaan, the latter street being part of the inner ring.

Merode is a railway and metro station in Brussels, Belgium. The metro station is located in the municipality of Etterbeek, under the "Porte de Tervueren/Tervuursepoort," which is the start of Avenue de Tervueren/Tervurenlaan, a major street in Brussels. The underground train station is located under the "Place Prince Jean de Mérode/Prins Jean de Merodeplein," named in honour of Jean Philippe Eugène de Mérode, after whom the station is also named. The two stations are connected by an underground hallway. 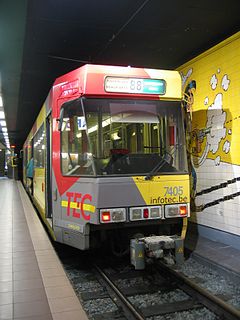 A premetro is a tramway or light railway which includes segments built to rapid transit standards, generally as part of a process of conversion to a metro-standards railway usually by the construction of tunnels in the central city area. 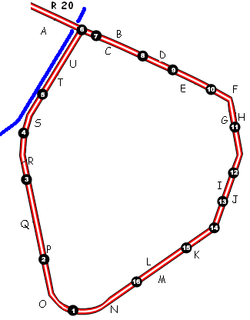 The Brussels small ring inner ring road, formally R20 is a series of roadways in central Brussels, Belgium, surrounding the historic city centre. The city centre is usually defined as the area within the small ring; this area is called the pentagon due to its pentagonal shape. The pentagon forms the core of the City of Brussels municipality. 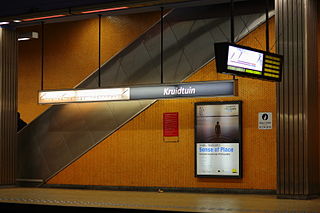 Botanique (French) or Kruidtuin (Dutch) is a Brussels metro station on the northern segment of lines 2 and 6. It is located under the small ring at Rue Royale/Koningsstraat in the municipality of the Saint-Josse-ten-Noode, north of the City of Brussels (Belgium). It opened as a premetro station on 18 August 1974 and became a full metro station on 2 October 1988. 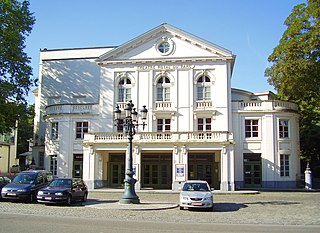 The Royal Park Theatre is a theatre in Brussels (Belgium). It is located at 3, Rue de la Loi/Wetstraat, on the edge of Brussels' Park, facing the Federal Parliament. It is served by Brussels metro stations Parc/Park and Arts-Loi/Kunst-Wet.

The Place Royale or Koningsplein is a historic neoclassical square in the Royal Quarter of Brussels, Belgium. Built between 1775 and 1782 as part of an urban project including Brussels' Park, it is rectangular and symmetrical in shape and is flanked by some of the main museums in the city. 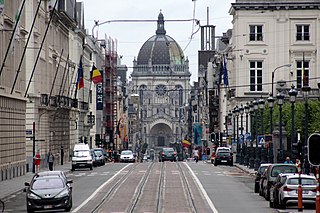 Rue Royale (French) or Koningsstraat (Dutch), meaning "Royal Street" or "King's Street", is a street in Brussels, Belgium, running through the municipalities of Schaerbeek, Saint-Josse-ten-Noode and the City of Brussels. It is limited to the south by the Place Royale/Koningsplein in the city centre and to the north by the Place de la Reine/Koninginplein in Schaerbeek. Several places of interest lie along Rue Royale, for instance the Royal Palace of Brussels, the Centre for Fine Arts, Brussels' Park, the Congress Column, the Botanical Garden of Brussels, the Botanique concert hall and St. Mary's Royal Church.

The Corinthia Grand Hotel Astoria, formerly the Hotel Astoria, is a five-star hotel located at 101–103, rue Royale/Koningsstraat, in central Brussels (Belgium). Built in 1909 for the Brussels International Exposition of 1910, it has served as a famous meeting place for kings and other great statesmen and world personalities. 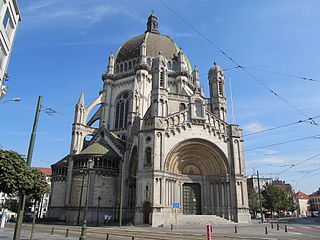 Saint Mary's Royal Church is a Roman Catholic parish church located on the Place de la Reine/Koninginneplein in the Brussels municipality of Schaerbeek (Belgium). Officially dedicated to Our Lady of the Assumption, it is popularly associated with Queen Louise-Marie, first Queen of the Belgians, as is the square where it is located, which earned it the title of "Royal". 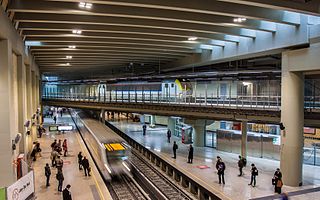