Parmelia is a southern suburb of Perth, Western Australia, located in the City of Kwinana.

Parmelia is one of the Kwinana suburbs named after a ship. Parmelia was the first ship to arrive in June 1829 bringing settlers to establish the new colony at the Swan River in Western Australia. Its passengers included the new Governor and his wife, James and Ellen Stirling.

Chisham Avenue is the main residential street which runs through the suburb. It features an array of homes built during the 1970s which were once home to the managers for BP's oil refinery industrial operations and company executives.

There is a recquatic centre which features a gym, swimming pool, spa and sauna, and sports courts for basketball, indoor soccer and other sports. The Kwinana Recquatic is embarking on a $6,000,000 refurbishment project which is set to re-launch the centre as Kwinana's premier fitness and recreation facility.[ timeframe? ]

Parmelia is a family orientated suburb with many young families and retirees.

The Metronet project will see the rail line through Parmelia and upgrades to the Kwinana railway station boost liveability in the area. Federal funding for the project was received in May 2017.

Property developer, the Meridian group has engaged with the City of Kwinana to design and build detached houses, townhouses, villas and apartments in Parmelia. Construction has begun and a row of double storey houses and townhouses are currently undergoing construction.[ timeframe? ]

Parmelia is at the centre of a $340m city centre revitalisation. The redevelopment includes a $22m library and resource centre, $7.5m youth space, the new Admiral Hotel and a revamp of the Kwinana Marketplace Shopping Centre.[ citation needed ] The suburb also has some of the most extensive parklands and natural bush reserves in the state.[ citation needed ]

The Kwinana Adventure Park is opposite the Kwinana Marketplace shopping centre. It was built by the City of Kwinana at a cost of $5.2 million, and features 11,000 m2 (120,000 sq ft) of play space, making it one of the largest public playgrounds in Western Australia. 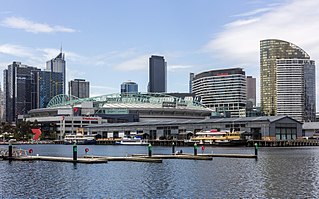 Docklands is an inner suburb of Melbourne, Victoria, Australia, 2 km (1.2 mi) west of the city's Central Business District (CBD). Its local government area is the City of Melbourne. At the 2016 Census, Docklands had a population of 10,964. Primarily a waterfront area centred on the banks of the Yarra River, it is bounded by Wurundjeri Way and the Charles Grimes Bridge to the east, CityLink to the west and Lorimer Street across the Yarra to the south.

Wantirna South is a suburb of Melbourne, Victoria, Australia, 25 km east of Melbourne's Central Business District, located within the City of Knox local government area. At the 2016 Census Wantirna South had a population of 19,271. 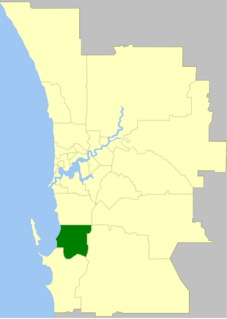 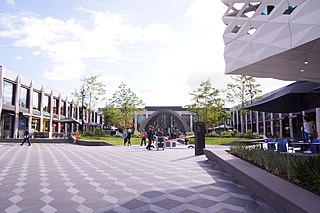 Eastland Shopping Centre is a large shopping centre located in the outer eastern suburb of Ringwood, in Melbourne, Victoria, Australia, which first opened on 31 October 1967.

Revesby, a suburb of local government area City of Canterbury-Bankstown, is located 22 kilometres south-west of the Sydney central business district, in the state of New South Wales, Australia, and is a part of the South-western Sydney region.

Wetherill Park is a suburb in Greater Western Sydney, in the state of New South Wales, Australia. Wetherill Park is located 34 kilometres west of the Sydney central business district, in the local government area of the City of Fairfield.

Smithfield is a suburb of Sydney, in the state of New South Wales, Australia. Smithfield is located 25 kilometres (16 mi) west of the Sydney central business district, in the local government areas of the City of Fairfield and Cumberland Council. Located in the Greater Western Sydney region, the suburb is one of the largest in Fairfield City by area. 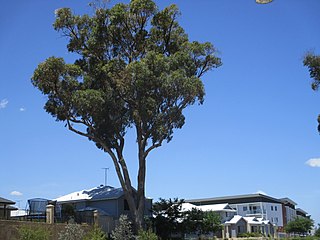 Baldivis is a semi-rural residential suburb 46 kilometres (29 mi) south of Perth, Western Australia|Perth]], and 11 kilometres (6.8 mi) southeast of the regional centre of Rockingham. It is located within the City of Rockingham local government area. 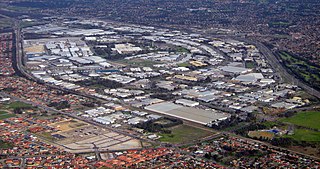 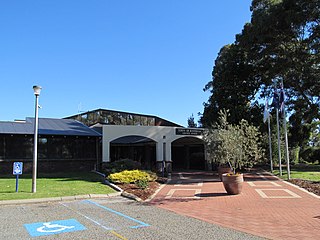 Kwinana Town Centre is a suburb of the City of Kwinana in the outer southern suburbs of Perth, Western Australia.

Bonython is a suburb of Tuggeranong, a township in southern Canberra, capital city of Australia. 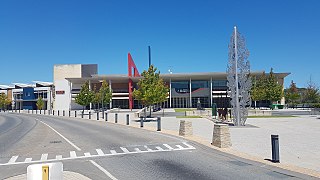 Ellenbrook is a northeastern suburb of Perth, Western Australia, about 20 km (12 mi) from Perth's central business district (CBD), located within the City of Swan. Ellenbrook, and its neighbouring suburbs of The Vines and Aveley, are unusual for Perth in being a significant distance from neighbouring suburbs. Given this relative isolation and the distance from the CBD, Ellenbrook has been designed and developed as a self-sustainable community. At June 2018 the estimated urban population for Ellenbrook and surrounds was 41,382. At the time of the 2016 census there were 22,681 people living in the gazetted suburb. It is envisioned that Ellenbrook will eventually become a satellite city, with a population of 80,000.

Woodville Gardens is a north-western suburb of Adelaide 9 km from the CBD, in the state of South Australia, Australia and falls under the City of Port Adelaide Enfield. It is adjacent to Woodville North, Mansfield Park, Ferryden Park, and Kilkenny. The post code for Woodville Gardens is 5012. It is bounded to the south by First Avenue, and to the east by Liberty Grove, and to the west by Hanson Road.

Westfield Booragoon is a major regional shopping centre in the city of Perth, Western Australia. Westfield Booragoon is located at the corner of Marmion Street and Riseley Street in the southern suburb of Booragoon. 50% of the shopping complex is owned by AMP Limited through its Australian Core Property Portfolio with the remaining 50% owned by Scentre Group which owns and operates its properties under the Westfield name of which the company is derived from. 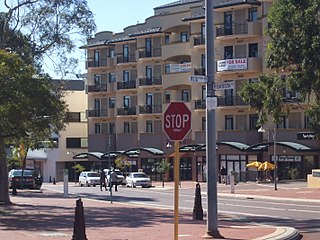 Joondalup is a suburb of the regional City of Joondalup in Perth, Western Australia, which includes the city's central business district as well as the council chambers for the local authority. 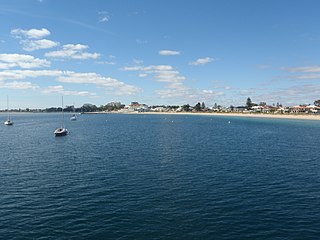 Norwest is a suburb of the Hills District within Greater Western Sydney, in the state of New South Wales, Australia, located 35 kilometres north-west of the Sydney central business district. The Norwest Business Park is located within Norwest. The council chambers for The Hills Shire Council are also located within this suburb.