General Sir Peter Stark Lumsden GCB CSI DL (9 November 1829 – 9 November 1918) was a British military officer who served in India. Born in Belhelvie, Aberdeenshire, he was the fourth son of Colonel Thomas Lumsden CB. He studied at Addiscombe Military Seminary, before officially joining military service as an ensign in the 60th Bengal Native Infantry in 1847. From 1852 to 1857 he served on the North-West Frontier, where, among other activities, he participated in the suppression of the Indian Rebellion of 1857 and the capture of Tantya Tope in 1859.

Following his time on the North-West Frontier, Lumsden served as quartermaster general in 1860 during the Second Opium War, where he participated in the capture of both Tang-ku and the Taku Forts. He was promoted to brevet-lieutenant-colonel, before giving his final act of military service in the Bhutan War of 1865. He was promoted again to Adjutant-General of the Indian Army in 1874, and also acted as aide-de-camp to Queen Victoria for eleven years.

In 1883, Lumsden was awarded a Knight Grand Cross of the Order of the Bath and was appointed as a commissioner on the Council of India for 10 years. He represented Britain a year later at the Anglo-Russian Commission for the demarcation of the north-west boundary of Afghanistan, then acted as British representative on the Afghan Frontier Commission. After retiring from military service in 1893, Lumsden served as a justice of the peace in his home county of Aberdeenshire, before dying on his 89th birthday, 9 November 1918, in Dufftown, Banffshire.

Peter Stark Lumsden was born at Belhelvie Lodge, Belhelvie, Aberdeenshire, on 9 November 1829. He was trained at Addiscombe Military Seminary from the age of 20, [1] and entered the East India Company's Bengal Army in 1847 as an ensign in the 60th Bengal Native Infantry. [2] Between 1852 and 1857 he served on the North-West Frontier in five expeditions against native tribes: the Mohmunds, the Ootman Khel, the Bori Afridis and the Miranzais. He was mentioned in despatches five times and awarded the special thanks of the Local and supreme Governments. From 1857 to 1858 he accompanied a special peace-finding mission to Kandahar with his brother Harry Lumsden. [3] He received thanks from the Government for his work, [4] but returned to India to take part in the suppression of the Indian Mutiny. Lumsden next joined the Central India Field Force at Gwalior under General Sir Robert Napier, [5] and, as assistant quartermaster general under Major-General Hugh Rose, shared in the pursuit and capture of Tantya Tope in 1859, when he was again mentioned in despatches. [6]

Lumsden's next period of active service was as quartermaster general on the staff of General Napier, who commanded the 2nd division of the expeditionary force to China during the Second Opium War, in 1860. [7] Lumsden took part in the operations of the Anglo-French forces, including the action of Sin-ho, the capture of Tang-ku and the capture of the Taku Forts that led up to the advance on and occupation of Beijing. [8] He was again mentioned in despatches and promoted to brevet-Major and then brevet-lieutenant-colonel. [7]

The final spell of active service in Lumsden's military career was in the Bhutan War of 1865: his later employment was on the staff and in political posts. He was deputy quartermaster general from 1864 to 1868, and quartermaster general of the Indian Army from 1868 to 1873. He was Acting Resident in Hyderabad, 1873, [2] and Adjutant-General, India from 1874 to 1879, when he was appointed Chief of the Staff in India. [9] He also served for eleven years as an aide-de-camp to Queen Victoria. [2]

Lumsden served as Chief of Staff to the commander-in-chief, General Sir F. P. Haines, during the Second Anglo-Afghan War, for which he received the Order of the Bath. In 1884, Lumsden returned to the North-West frontier, when he was selected as British representative on the Anglo-Russian Commission for the demarcation of the north-west boundary of Afghanistan. [9] [10] While leading the Commission, he felt he had been given insufficiently clear instructions by the British government, which proved very dangerous as the situation in Afghanistan deteriorated to the brink of war with Russia. [11] He resigned and returned to England in 1885 after the Panjdeh Incident. [12] He left London to represent the British at negotiations with Russia in selecting the Afghan Frontier Commission to determine the Afghan boundary. [13]

Lumsden was appointed a Knight Grand Cross of the Order of the Bath [14] and given a commissioner's seat on the Council of India, which he occupied for a 10-year tenure from 1883. In 1885 he wrote "Countries and Tribes Bordering on the Koh-i-Baba Range", an article for the seventh volume of the journal Proceedings of the Royal Geographical Society and Monthly Record of Geography . [15]

Following completion of his tenure on the Council of India, Lumsden retired from military service in 1893. [16] He was placed on the Unemployed Supernumerary List three years later and settled down on Buchromb, an estate that he had purchased near Dufftown. During this time he co-wrote Lumsden of the Guides with G. R. Elsmie. The book detailed the role that his brother, Harry Burnett Lumsden, had played in founding The Corps of the Guides, a regiment of the British Indian Army. [17] He identified himself with local affairs and served as a justice of the peace and as Deputy Lieutenant for Banffshire and Aberdeenshire. Lumsden died on 9 November 1918 in his estate at Dufftown, Banffshire. [7]

Lumsden was married to Mary Marriott in 1862. [16] His father was Colonel Thomas Lumsden CB, [2] with one of his three older brothers being Harry Burnett Lumsden. Thomas Lumsden was a distinguished officer of the Bengal Horse Artillery who had served in the Nepal Campaign of 1814 and at the siege of Hatrass and the capture of Kalunga in 1817. [18] [19] Thomas was himself the son of Harry Lumsden, an advocate in Aberdeen who had bought an estate at Belhelvie. He returned home on leave from the Bengal Army in 1819 to marry Hay Burnett of Elrick, and went on to serve another 23 years in India before retiring to Belhelvie in 1842. They had a total of six sons, of whom three emigrated to Canada and two (Harry and Peter) followed in their father's footsteps by pursuing military careers in India. [20]

Major-General Sir Herbert Benjamin EdwardesDCL was a British administrator, soldier, and statesman active in the Punjab region of British India. He is best known as the "Hero of Multan" for his pivotal role in securing British victory in the Second Anglo-Sikh War. 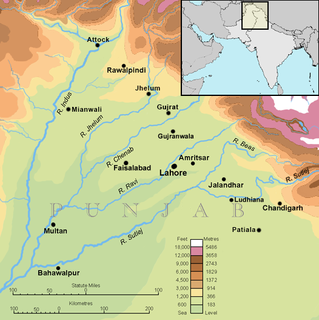 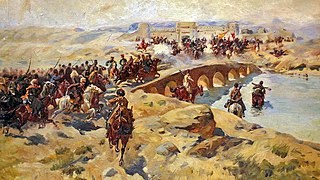 Field Marshal Sir Donald Martin Stewart, 1st Baronet, was a senior Indian Army officer. He fought on the Aka Khel Expedition to the North-West Frontier in 1854, took part in the response to the Indian Rebellion in 1857 and, after serving as commandant of the penal settlement of the Andaman Islands, fought in the Second Anglo-Afghan War as Commander of the Quetta Army. In that role, he advanced through the Bolan Pass to Quetta, and then on to Kandahar in January 1879. In March 1880, he made a difficult march from Kandahar to Kabul, fighting on the way the Battle of Ahmed Khel and Battle of Arzu, and then holding supreme military and civil command in northern Afghanistan. He became Commander-in-Chief, India in April 1881 and a member of the Council of the Secretary of State for India in 1893.

Lieutenant-General Sir Percy Henry Noel Lake was a senior commander of the British Indian Army, serving during World War I, and a Canadian soldier.

Lieutenant General Sir Lewis Macclesfield Heath, was an officer in the British Indian Army during the early to mid-twentieth century.

Belhelvie is a small village and civil parish in Aberdeenshire in Scotland. The parish has a population of 3,802, of which 1,653 are in the village. The history of the parish is available online. The churchyard contains a notable example of a morthouse used against the activities of bodysnatchers in the early 19th century.

Henry Lawrence's "Young Men", also known as "the Paladins of the Punjaub", were a group of East India Company officers sent to act as "advisers" to the Sikhs after the First Sikh War in 1846. In the words of George Lawrence, his duties were "to act as a friendly adviser to the native officials". They served under the command of Sir Henry Lawrence, initially the Agent to the Governor General and later also the Resident at Lahore.

Henry Walter Bellew MRCP was an Indian-born British medical officer who worked in Afghanistan. He wrote several books based on his explorations in the region during the course of his army career and also studied and wrote on the languages and culture of Afghanistan.

The Guides Cavalry is an armoured regiment of the Pakistan Army which was raised in 1846 as The Corps of Guides. During more than a hundred and fifty years of military service, the regiment has earned the reputation of one of the most renowned military units in the world. 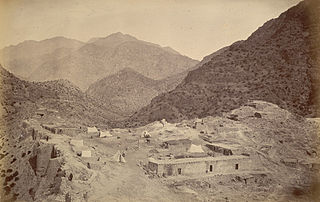 The Battle of Ali Masjid, which took place on 21 November 1878, was the opening battle in the Second Anglo-Afghan War between the British forces, under Lieutenant-General Sir Samuel James Browne, and the Afghan forces, under Ghulam Haider Khan. The perceived offence of an Afghan general's refusal to allow a British envoy entrance to the country was used as an excuse to attack the fortress of Ali Masjid, as the opening battle in the war. Despite numerous setbacks, including half the troops getting lost or delayed and missing the battle entirely, the British were lucky that the Afghans abandoned their position overnight.

George Robert Elsmie was a Scottish civil servant and judge in India, known also as an author.

General Sir Edwin Beaumont Johnson was a British Army officer who served as Adjutant-General in India. 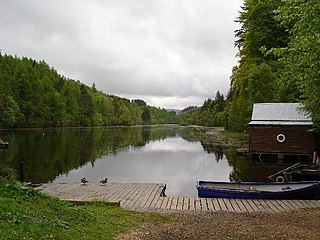 Drummuir Curlers' Platform railway station was a private station opened on the Keith and Dufftown Railway for the use of the curlers belonging to the Drummuir Curling Club who played on the nearby Loch Park in the parish of Botriphnie. The GNoSR line ran from Keith to Dufftown.