Last updated May 13, 2021
For the theorem on existence and uniqueness of solutions of differential equations, see Picard–Lindelöf theorem.

Little Picard Theorem: If a function f : C → C is entire and non-constant, then the set of values that f(z) assumes is either the whole complex plane or the plane minus a single point.

Sketch of Proof: Picard's original proof was based on properties of the modular lambda function, usually denoted by λ, and which performs, using modern terminology, the holomorphic universal covering of the twice punctured plane by the unit disc. This function is explicitly constructed in the theory of elliptic functions. If f omits two values, then the composition of f with the inverse of the modular function maps the plane into the unit disc which implies that f is constant by Liouville's theorem.

This theorem is a significant strengthening of Liouville's theorem which states that the image of an entire non-constant function must be unbounded. Many different proofs of Picard's theorem were later found and Schottky's theorem is a quantitative version of it. In the case where the values of f are missing a single point, this point is called a lacunary value of the function.

Great Picard's Theorem: If an analytic function f has an essential singularity at a point w, then on any punctured neighborhood of w, f(z) takes on all possible complex values, with at most a single exception, infinitely often.

This is a substantial strengthening of the Casorati–Weierstrass theorem, which only guarantees that the range of f is dense in the complex plane. A result of the Great Picard Theorem is that any entire, non-polynomial function attains all possible complex values infinitely often, with at most one exception.

The "single exception" is needed in both theorems, as demonstrated here:

Great Picard's Theorem (meromorphic version): If M is a Riemann surface, w a point on M, P1(C) = C ∪ {∞} denotes the Riemann sphere and f : M\{w} → P1(C) is a holomorphic function with essential singularity at w, then on any open subset of M containing w, the function f(z) attains all but at most two points of P1(C) infinitely often.

Example: The function f(z) = 1/(1 − e1/z) is meromorphic on C* = C - {0}, the complex plane with the origin deleted. It has an essential singularity at z = 0 and attains the value ∞ infinitely often in any neighborhood of 0; however it does not attain the values 0 or 1.

With this generalization, Little Picard Theorem follows from Great Picard Theorem because an entire function is either a polynomial or it has an essential singularity at infinity. As with the little theorem, the (at most two) points that are not attained are lacunary values of the function.

The following conjecture is related to "Great Picard's Theorem": [1]

Conjecture: Let {U1, ..., Un} be a collection of open connected subsets of C that cover the punctured unit disk D \ {0}. Suppose that on each Uj there is an injective holomorphic function fj, such that dfj = dfk on each intersection Uj ∩ Uk. Then the differentials glue together to a meromorphic 1-form on D.

It is clear that the differentials glue together to a holomorphic 1-form g dz on D \ {0}. In the special case where the residue of g at 0 is zero the conjecture follows from the "Great Picard's Theorem".

In complex analysis, an essential singularity of a function is a "severe" singularity near which the function exhibits odd behavior. 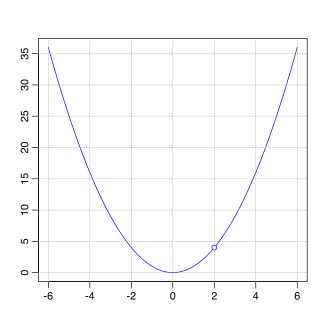 In complex analysis, a removable singularity of a holomorphic function is a point at which the function is undefined, but it is possible to redefine the function at that point in such a way that the resulting function is regular in a neighbourhood of that point.

In mathematics, the value distribution theory of holomorphic functions is a division of mathematical analysis. It tries to get quantitative measures of the number of times a function f(z) assumes a value a, as z grows in size, refining the Picard theorem on behaviour close to an essential singularity. The theory exists for analytic functions of one complex variable z, or of several complex variables.

In mathematics, a Paley–Wiener theorem is any theorem that relates decay properties of a function or distribution at infinity with analyticity of its Fourier transform. The theorem is named for Raymond Paley (1907–1933) and Norbert Wiener (1894–1964). The original theorems did not use the language of distributions, and instead applied to square-integrable functions. The first such theorem using distributions was due to Laurent Schwartz. These theorems heavily rely on the triangle inequality.

In complex analysis, a subfield of mathematics, a lacunary value or gap of a complex-valued function defined on a subset of the complex plane is a complex number which is not in the image of the function.

Bloch's Principle is a philosophical principle in mathematics stated by André Bloch.