Last updated March 02, 2020
Not to be confused with Semigallia.
Comune in Marche,Italy

Senigallia (or Sinigaglia in Old Italian, Romagnol: S’nigaja) is a comune and port town on Italy's Adriatic coast. It is situated in the province of Ancona in the Marche region and lies approximately 30 kilometers north-west of the provincial capital city Ancona. Senigallia's small port is located at the mouth of the river Misa. It is one of the endpoints of the Massa-Senigallia Line, one of the most important dividing lines (isoglosses) in the classification of the Romance languages.

Senigallia was first settled in the 4th century BC by the gallic tribe of the Senones who first settled this coastal area. In 284 BC, the settlement was taken over by Romans, who established the colony Sena Gallica there. "Sena" is probably a corrupted form of "Senones" and "Gallica" (meaning "Gaulish") distinguished it from Saena (Siena) in Etruria.

In the prelude to the Battle of the Metaurus between Romans and Carthaginians in 207 BC, Sena Gallica was the southernmost point of Carthaginian General Hasdrubal Barca's invasion of Italy. Senigallia was ravaged by Alaric during the decline of the Roman Empire and fortified when it became part of the Byzantine Empire. It was again laid waste by the Lombards in the 8th century and by the Saracens in the 9th. It was one of the five cities of the medieval Adriatic duchy of Pentapolis.

The diocese and the bishopric had long been established, and the city saw economic development, including the establishment of the so-called Magdalena Fair around the 13th century. The fair's popularity grew when Sergius, count of Senigallia, became engaged to the daughter of the count of Marseilles. On his engagement, the count of Marseilles presented Sergius with relics, said to be of Mary Magdalene. The fair was visited by merchants from both Europe and the Levant.

In the 15th century, Senigallia was captured and recaptured many times by opposing sides during the Guelph and Ghibelline war. Sigismondo Pandolfo Malatesta of Rimini fortified the town in the years 1450-1455. Pope Pius II made his nephew Antonio Piccolomini Lord of Senigallia in [?] but in 1464 the residents pledged loyalty to Pope Paul II. In 1472, Giacomo Piccolomini tried but failed to seize the town. In 1503 Cesare Borgia, the brother of the famous Lucrezia Borgia and illegitimate son of the Pope Alessandro VI, carried out a bloody coup at Senigallia against some of his disloyal supporters. Pope Sixtus IV assigned the lordship to the Della Rovere family. In 1516 this was temporarily revoked by Pope Leo X who transferred the Lordship to his nephew Lorenzo II de Medici, then again the Della Rovere family came back since 1624, when Senigallia definitively became part of the Papal State's legation (province) of Urbino.

Here was born Giovanni Maria Mastai Ferretti in 1792 who became Pope Pius IX in 1846 and was the last Pope to be the king of the Papal State until the Italian unification.

During The Great War significant damage was caused to the port installations and the town by intensive bombardment by units of the Austro-Hungarian navy led by the battleship SMS "Zrínyi". [3] More big damages were caused by the strong earthquake in 1930 and the Second world war.

After the war, Senigallia became one of the most important holiday resorts in Italy.

One of the recent most important citizens was the international photographer Mario Giacomelli.

Though traces of the city's history are still visible, much of today's city is modern. Visitor attractions include:

Senigallia is twinned with: [5] 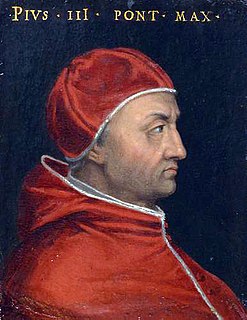 Romagna is an Italian historical region that approximately corresponds to the south-eastern portion of present-day Emilia-Romagna, North Italy. Traditionally, it is limited by the Apennines to the south-west, the Adriatic to the east, and the rivers Reno and Sillaro to the north and west. The region's major cities include Cesena, Faenza, Forlì, Imola, Ravenna, Rimini and City of San Marino. The region has been recently formally expanded with the transfer of seven comuni from the Marche region, which are a small number of comuni where Romagnolo dialect is spoken.

Da Montefeltro is the name of an historical Italian family who ruled Urbino and Gubbio and became Dukes of Urbino in 1443. The family extinguished in the male line in 1508 and the duchy was inherited by the Della Rovere family.

Pesaro is a city and comune in the Italian region of Marche, capital of the Province of Pesaro e Urbino, on the Adriatic Sea. According to the 2011 census, its population was 95,011, making it the second most populous city in the Marche, after Ancona. Pesaro was dubbed "Cycling City" by Italian environmentalist association Legambiente in recognition of its extensive network of bicycle paths and promotion of cycling. It is also known as "City of Music" as it is the birthplace of the composer Gioacchino Rossini. In 2015 the Italian Government applied for Pesaro to be declared a "Creative City" in UNESCO's World Heritage sites. In 2017 Pesaro received the European City of Sport award together with Aosta, Cagliari and Vicenza.

Jesi, also spelled Iesi, is a town and comune of the province of Ancona in Marche, Italy.

The Senones were an ancient Celtic Gallic culture. 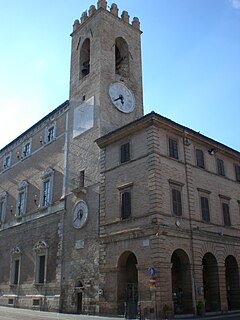 Osimo is a town and comune of the Marche region of Italy, in the province of Ancona. The municipality covers a hilly area located approximately 15 kilometres (9.3 mi) south of the port city of Ancona and the Adriatic Sea. As of 2015, Osimo had a total population of 35,037.

The Duchy of Urbino was a fief of the Holy See in central-northern Italy.

Castelleone di Suasa is a town and comune within the Province of Ancona, in the Marche region of Italy. 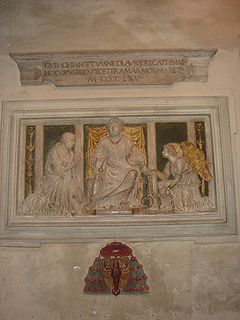 Domenico della Rovere was an Italian cardinal and patron of the arts.

The expression Ager Gallicus defines the territory of the Senone Gauls after it was devastated and conquered by Rome in 284 BC or 283 BC, either after the Battle of Arretium or the Battle of Lake Vadimon.

The Senigaglia family is an Italian Jewish family, whose origins can be traced back nearly 800 years, the period between the High Middle Age and the Renaissance.

The Basilica of Santa Aurea is a church situated in the Ostia Antica district of Ostia, Italy. Ostia became an episcopal see as early as the 3rd century AD. The present-day church, completed in 1483, it was the seat of the suburbicarian diocese of Ostia until 1966, when Ostia became part of the diocese of Rome. 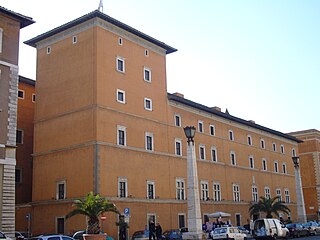 Palazzo Della Rovere is a palace in Rome, Italy, facing Via della Conciliazione. It is also known as Palazzo dei Penitenzieri.

Piazza Scossacavalli, also named Piazza di San Clemente, Piazza di Trento, Piazza d'Aragona, Piazza Salviati was a square in Rome, Italy, important for historical and architectonic reasons. The square was demolished together with the surrounding quarter in 1937 due to the construction of Via della Conciliazione.