Ships with Wings is a 1941 British war film directed by Sergei Nolbandov and starring John Clements, Leslie Banks and Jane Baxter. [1] The film is set during the Battle of Greece (1940-1941). It depicts military aviation.

During the Second World War, pilot Lieutenant Dick Stacey is expelled from the British Fleet Air Arm for imprudence, but later has the opportunity to redeem himself when he takes part in the fight against the Germans in Greece.

The film was made by Ealing Studios, but filmed at Fountain Studios in Wembley Park, north-west London. [2]

The film premiered in November 1941 and went on general release in January 1942. [3] It was a commercial success and was the second most popular film in British cinemas that month behind It Started with Eve . [4] The sinking of the Ark Royal, on which a number of scenes were set and shot, in November 1941 added a sense of topicality to the film. Ark Royal portrays the fictional HMS Invincible - a name not used for a Royal Navy aircraft carrier until the 1970s. The most recent ship named HMS Invincible until then was a battlecruiser sunk at the Battle of Jutland in 1916.

The film received an overwhelmingly positive reception from the popular press on its release. [5] However, it came under attack from a number of intellectuals for what they considered its lack of realism while the Prime Minister Winston Churchill objected because of the large number of British casualties shown in the film which he considered bad for morale. [6] The producer Michael Balcon was disturbed by these criticisms and commenced a shift in Ealing’s production away from such films towards what were considered more realistic portrayals in an attempt to counter this perceived lack of authenticity. However, except for Dead of Night , Ealing's films for the remainder of the war failed to enjoy the same commercial success as the earlier "unrealistic" war films and were eclipsed at the box office by the Gainsborough melodramas. [7]

Seven ships of the Royal Navy have been named HMS Invincible.

The Invincible class was a class of light aircraft carrier operated by the Royal Navy. Three ships were constructed: HMS Invincible, HMS Illustrious and HMS Ark Royal. The vessels were built as aviation-capable anti-submarine warfare (ASW) platforms to counter the Cold War North Atlantic Soviet submarine threat, and initially embarked Sea Harrier aircraft and Sea King HAS.1 anti-submarine helicopters. With cancellation of the aircraft carriers renewal programme in the 1960s, the three ships became the replacements for Ark Royal and Eagle fleet carriers and the Centaur-class light fleet carriers, and the Royal Navy's sole class of aircraft carrier.

HMS Ark Royal was a light aircraft carrier and former flagship of the Royal Navy. She was the third and final vessel of Invincible class. She was built by Swan Hunter on the River Tyne and launched by them in 1981. Ark Royal was christened by Queen Elizabeth The Queen Mother. She followed sister ships HMS Invincible and HMS Illustrious into service in 1985.

HMS Ark Royal was an aircraft carrier of the Royal Navy that was operated during the Second World War. 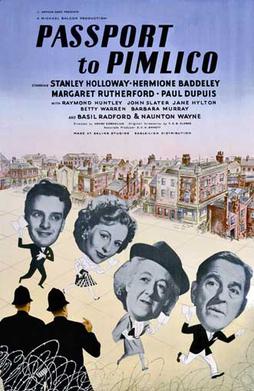 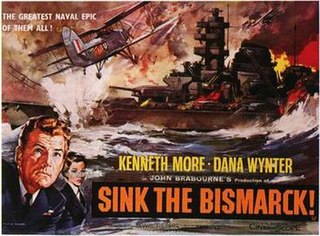 Sink the Bismarck! is a 1960 black-and-white CinemaScope British war film based on the 1959 book The Last Nine Days of the Bismarck by C. S. Forester. It stars Kenneth More and Dana Wynter and was directed by Lewis Gilbert. To date, it is the only film made that deals directly with the operations, chase and sinking of the battleship Bismarck by the Royal Navy during the Second World War. Although war films were common in the 1960s, Sink the Bismarck! was seen as something of an anomaly, with much of its time devoted to the "unsung back-room planners as much as on the combatants themselves". Its historical accuracy, in particular, met with much praise despite a number of inconsistencies. 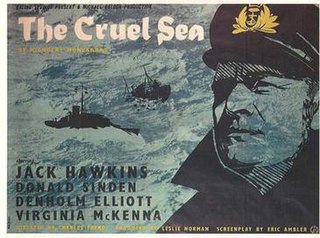 Warship is a British television drama series produced by the BBC and broadcast between 1973 and 1977. The series was set contemporaneously and depicted life on board the fictitious Royal Navy frigate HMS Hero. Four series were produced with 45 episodes made in total. 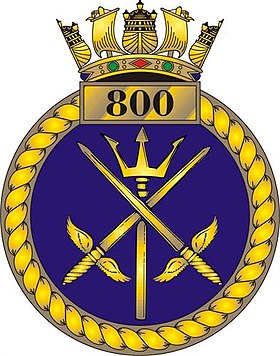 Admiral of the Fleet Sir Michael Patrick Pollock, was a senior officer in the Royal Navy who rose to become First Sea Lord and Chief of the Naval Staff in the early 1970s. In the Second World War, he was an officer on ships tasked with protecting convoys in the Atlantic and the Mediterranean, and was gunnery officer on the cruiser HMS Norfolk when she fought the German battleship Scharnhorst during the Battle of North Cape. He later commanded the aircraft carrier HMS Ark Royal, and hosted Ian Smith on HMS Tiger. In retirement, he held the position of King of Arms of the Order of the Bath and Gloucester King of Arms, with responsibility for heraldry in Wales. 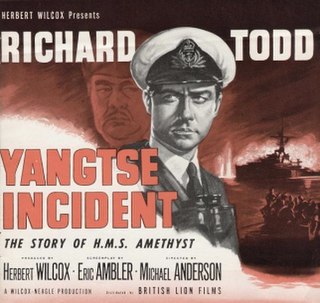 Yangtse Incident: The Story of H.M.S. Amethyst (1957) is a British war film that tells the story of the British sloop HMS Amethyst caught up in the Chinese Civil War and involved in the 1949 Yangtze Incident. Directed by Michael Anderson, it stars Richard Todd, William Hartnell, and Akim Tamiroff. 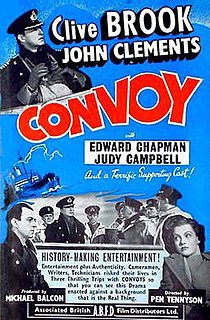 Convoy is a 1940 British war film, produced by Ealing Studios, directed by Pen Tennyson and starring Clive Brook, John Clements and Edward Chapman. Convoy was Tennyson's last film before he was killed in an aircraft crash, while serving in the Royal Navy. 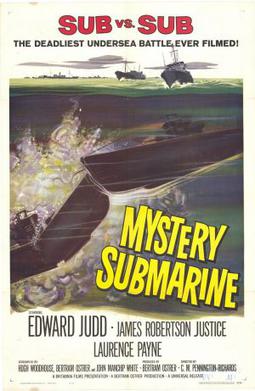 Mystery Submarine is a 1963 British war film directed by C. M. Pennington-Richards and starring Edward Judd, James Robertson Justice and Laurence Payne. A captured German submarine is used by the Royal Navy to trick a German force aiming to intercept a supply convoy. The film is based on a play by Jon Manchip White.

Cedric Swinton Holland CB was an officer of the Royal Navy who saw service during the First and Second World Wars, rising to the rank of vice-admiral. 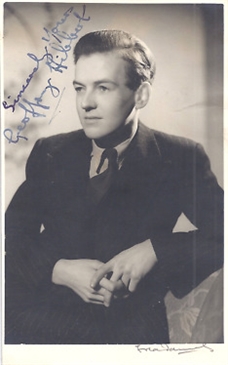 Geoffrey Hibbert was an English stage, film and television actor.

HMS Alisma was a Flower-class corvette that served in the Royal Navy.