The Scapegoat is a 1959 British mystery film based on the 1957 novel of the same name by Daphne du Maurier, and starring Alec Guinness, Nicole Maurey and Bette Davis. [2] [3]

John Barratt (Alec Guinness), a lonely, discontented teacher of French at a British university, vacations in France. There, by chance, he meets his double, French nobleman Jacques De Gué (Guinness again). They become acquainted. Barratt becomes drunk and accepts De Gué's invitation to share his hotel room. When he wakes up the next morning, Barratt finds himself alone in the room, with his clothes and passport missing. De Gué's chauffeur Gaston shows up to take his master home, and Barratt is unable to convince him that he is not the nobleman. Gaston calls Dr. Aloin, who diagnoses the Englishman as suffering from schizophrenia.

A bewildered Barratt allows himself to be taken to De Gué's chateau, where he meets "his" family: daughter Marie-Noel, wife Françoise, sister Blanche and formidable mother the Countess. None of them believe his story - it appears that De Gué is a malicious liar - so Barratt resigns himself to playing along. As time goes on, he feels needed, something missing in his sterile prior life.

The next day, brother-in-law Aristide discusses business with him. Later, in the nearby town, Barratt is nearly run down by De Gué's mistress, Béla, on her horse. He spends the usual Wednesday afternoon tryst getting acquainted with her. The next time they meet, before he can confess the truth, she informs him that she has already guessed it.

Barratt delves into the neglected family glass-making business. He decides to renew a contract with the local foundry, even on unfavourable terms, to avoid throwing the longtime employees out of work. The Countess is upset by his decision and mentions a marriage contract. When Barratt investigates, he learns that Françoise's considerable wealth, tied up by her businessman father, would come under his control if she were to die. Françoise finds him reading the contract and becomes very upset, accusing him of wanting to see her dead. Barratt consoles her by telling her that the contract can be changed. He begins to suspect the reason for De Gué's disappearance.

One day, Barratt receives a message from Béla. He goes to see her and spends a pleasant afternoon with her, though she denies having sent for him. When he returns to the chateau, he learns that Françoise has died from a fall. Blanche accuses Barratt of murder, stating that she overheard him with his wife in her room just before her death. However, Gaston provides an unshakable alibi, having driven Barratt to his rendezvous with Béla.

Barratt is not surprised when De Gué resurfaces shortly afterward. They meet in private; the Frenchman demands his identity back, but Barratt refuses. Both men have come armed and shots are exchanged. Barratt emerges victorious and returns to his new life and Béla.

According to Robert Osborne of Turner Classic Movies, the original choice for Barratt / De Gué was Cary Grant, but Daphne du Maurier insisted on Guinness because he reminded her of her father, actor Gerald du Maurier. [4] Later though, she regretted her choice, blaming Guinness for the film’s box-office failure, [4] a production that du Maurier herself had partially financed. [4]

Osborne also states that Guinness handled the directing chores when Hamer was drunk. [5] 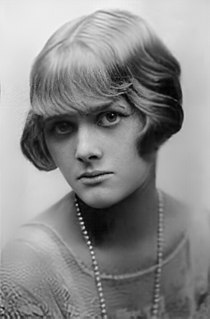 Dame Daphne du Maurier,, also known as Lady Browning after her husband was knighted in 1946, was an English novelist, biographer and playwright. Her parents were actor-manager Sir Gerald du Maurier and his wife, actress Muriel Beaumont. Her grandfather was George du Maurier, a writer and cartoonist. 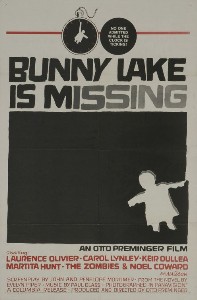 Bunny Lake Is Missing is a 1965 British-American psychological drama film, directed and produced by Otto Preminger. Filmed in black-and-white widescreen format in London, it was based on the 1957 novel Bunny Lake Is Missing by Merriam Modell. It stars Carol Lynley as a mother searching for her missing daughter, Keir Dullea as her brother, and Laurence Olivier as the police officer investigating the case. The score is by Paul Glass and the opening theme is often heard as a refrain. The rock band the Zombies also appear in the film, in a television broadcast. 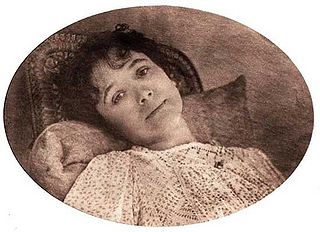 Sylvia Llewelyn Davies was the mother of the boys who were the inspiration for the stories of Peter Pan by J. M. Barrie. She was the daughter of cartoonist and writer George du Maurier and his wife Emma Wightwick, the elder sister to actor Gerald du Maurier, the aunt of novelists Angela and Daphne du Maurier, and a great-granddaughter of Mary Anne Clarke, royal mistress of Prince Frederick, Duke of York and Albany. 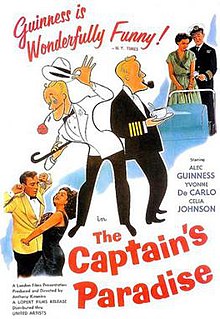 The Scapegoat is a 1957 novel by Daphne du Maurier. In 1959, it was made into a film of the same name, starring Sir Alec Guinness. It was also the basis of a film broadcast in 2012 starring Matthew Rhys and written and directed by Charles Sturridge. 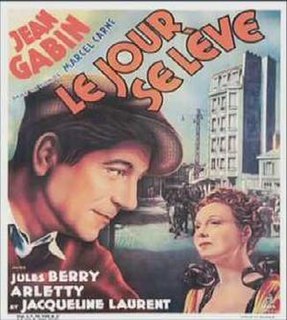 Le jour se lève is a 1939 French film directed by Marcel Carné and written by Jacques Prévert, based on a story by Jacques Viot. It is considered one of the principal examples of the French film movement known as poetic realism.

Me and the Colonel is a 1958 American comedy film based on the play Jacobowsky und der Oberst by Franz Werfel. It was directed by Peter Glenville and stars Danny Kaye, Curd Jürgens and Nicole Maurey.

A scapegoat is a goat used in a religious ritual or the victim of scapegoating, the singling out of a party for unmerited blame. 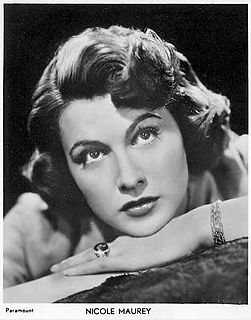 Nicole Maurey was a French actress, who appeared in 65 film and television productions between 1945 and 1997.

The Scapegoat is a British film adaptation of Daphne du Maurier's 1957 novel of the same name. The drama is written and directed by Charles Sturridge and stars Matthew Rhys as lookalike characters John Standing and Johnny Spence. It was broadcast on ITV on 9 September 2012.

Georges Aristide Claude Félix Rivière is a French retired actor who worked in Argentine cinema in the 1950s. He appeared in nearly 50 films between 1948 and 1970.

Journal of a Crime is a 1934 American pre-Code crime drama film produced by First National Pictures. It was directed by William Keighley and stars Ruth Chatterton, Adolphe Menjou and Claire Dodd. The film is a remake of the 1933 French film Une vie perdue, written by Jacques Deval. 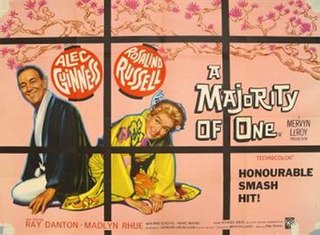 A Majority of One is a 1961 American comedy film directed by Mervyn LeRoy, starring Rosalind Russell and Alec Guinness. It was adapted from the play of the same name by Leonard Spigelgass, which was a Broadway hit in the 1959-1960 season, starring Gertrude Berg and Cedric Hardwicke.

Berthe Cerny was a French actress, known as an elegant blonde beauty. She had a brilliant career, interpreting both classical and contemporary roles. She had several affairs, including with the politicians Aristide Briand and Paul Reynaud, and had two illegitimate sons by other lovers. She joined the Comédie-Française in 1906 and became a sociétaire in 1909.