Shorecrest High School is a public high school (grades 9 through 12) in Shoreline, Washington, United States, one of two high schools in the Shoreline School District. Shorecrest was founded in 1961. Its mascot is Otis the Fighting Scot and students refer to themselves as "Scots", or the "Highlanders", a reference to the Clan Gordon.

In addition, 26.8% of the students were eligible for free or reduced lunch. [2]

The following is a listing of the sports offered at Shorecrest and the state tournament championships won.

The Shoreline School District 412 is the school district in an established residential community north of Seattle and includes the cities of Shoreline and Lake Forest Park in the U.S. state of Washington. 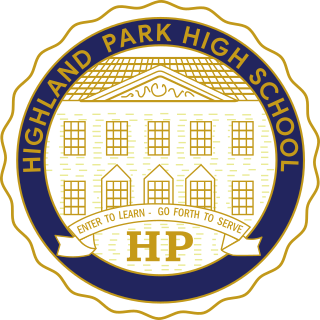 Highland Park High School is a public, co-educational high school located immediately north of downtown Dallas in University Park, Dallas County, Texas. It is a part of the Highland Park Independent School District, which serves approximately 32,200 residents who are predominantly college-educated professionals and business leaders in the Dallas community. It serves all of the city of University Park, most of the town of Highland Park, and portions of Dallas.

St. Thomas Aquinas High School is a private, Roman Catholic, college-preparatory high school in Fort Lauderdale, Florida, United States. The school was founded in 1936 as part of St. Anthony School and moved to its current location in southwest Fort Lauderdale in 1952. It is sponsored by the Roman Catholic Archdiocese of Miami and accredited by the Southern Association of Colleges and Schools. The school currently enrolls 1,994 students on its 25-acre (100,000 m2) campus.

Decatur High School is an American secondary school teaching grades nine through twelve. A part of the Federal Way School District, it was founded in 1971 in Federal Way, Washington.The graduating classes of 1973-1976 were schooled in the Illahee Middle School building. The school was built in 1976, renovated in 1987, then again remodeled in 2002.

Plymouth Whitemarsh High School is a public high school in Plymouth Meeting, Pennsylvania, US. It is part of the Colonial School District.

Detroit Collegiate Preparatory Academy at Northwestern is a public high school in Detroit, Michigan; it replaced the previous Northwestern High School and is a part of Detroit Public Schools. The most recent enrollment figures for Northwestern indicate a student population of approximately 2,000.

Edison High School is located in Fresno, California, United States, as part of the Fresno Unified School District. It is a public high school located next to Computech Middle School.

St. Benedict's Preparatory School is a college preparatory school in Newark, New Jersey, United States. It is a K-12 school located on a 12 acres (4.9 ha) urban campus; it serves all genders for K-6 and boys only for seventh through twelfth grades. The school has been accredited by the Middle States Association of Colleges and Schools Commission on Elementary and Secondary Schools since 1990.

Baldwin Park High School is located in Baldwin Park, California. It is part of the Baldwin Park Unified School District. It is one of three high schools in the city, Sierra Vista High School and North Park Continuation School being the other two. Usually the students attending this high school are the ones coming from Holland Middle School (6-8), Olive Middle School (6-8), Santa Fe Elementary (3-8) and about half from Jones Junior High (7-8) and very few from Sierra Vista Junior High (7-8).The school colors are Royal blue, white and silver. The school mascot is a Brave.

The Metro League is a high school athletics conference in Seattle, Washington, part of the Washington Interscholastic Activities Association (WIAA). Its 18 members are in SeaKing District II, which includes Seattle and east King County.