Shrek SuperSlam is a fighting video game featuring characters from the Shrek film series. It was developed by Shaba Games, published by Activision and released in the fall of 2005 for the Xbox, PlayStation 2, GameCube, Nintendo DS and Game Boy Advance, with a Microsoft Windows port following shortly after. Up to four players can participate in battle using various characters from the first two Shrek films, along with some original characters like Luna the witch, the Black Knight, Quasimodo, and Humpty Dumpty (the latter of which later appeared in the standalone Puss in Boots film in 2011).

The main plot focuses on Shrek and his friends attempting to help Donkey put the Dronkeys to sleep in order to watch Survivor: Sherwood Forest together at the Dragon's Keep. When one of the Dronkeys inadvertently destroys the family's storybook, the group takes turns creating their own stories. After telling enough stories, the Dronkeys do fall asleep only to be woken up after Shrek yells at the game's announcer for talking too much in the epilogue.

Shrek SuperSlam is a 3D-environment multiplayer fighting game in which two to four fighter characters battle in a variety of arena stages attempting to beat each other up and charge a special move called a "Slam" attack. When a "Slam" is successfully used on other fighters, the player gains points while continually (and creatively) destroying the arena in the process. Whoever gains the most "Slam" points will win when the round is over.

The game features three multiplayer modes: "Melee", "King of the Hill", and "Slammageddon".

In "Melee", the objective is to earn as many slam points within a two-minute time period. For attack, a word bank that says "Slam" will fill up. Once the bank has filled up, the player can unleash a Slam Attack which can hit multiple opponents. For each opponent who's hit, the player will receive a Slam Point, but if a player get slammed, they'll lose one. The player with the most slam points after the time limit stops wins.

In "King of the Hill", the object of the game is to stay atop of a hill the longest, while opponents try and knock each other off. The first player to reach 30 points wins. The longer the player stays on the hill, the more points she/he will receive.

In "Slammageddon", each single attack counts as a Slam.

Every character's "Slam" attack have different effects and range. For example, Shrek's "Green Storm" attack will send his opponents flying as he undergoes flatulence at close range, while Robin Hood's "Arrow Swarm" has him commanding his band of Merry Men to litter the battlefield in raining arrows from the sky. Other examples include Pinocchio's "Buzz Bomber" in which his nose grows and he flies across the arena at opponents or Fiona Ogre uses "Ogre Aria" to blast her enemies with floating projectile singing notes.

The game features 20 playable characters total, with 10 of these needing to be unlocked through gameplay progression. Each character has an array of various costumes/skins to change their appearance. Most of the characters have their own distinct fighting style and moves, with only one or two characters being very similar "clone fighters".

John Kassir voices the game's announcer. Mongo the Giant Gingerbread Man (voiced by Conrad Vernon) appears as part of a moving stage in the game. In the Game Boy Advance port of the game, Doris the ugly stepsister is also a playable character.

Madden NFL 06 is an American football video game which was released in 2005. It is also a launch game for the Xbox 360. It is the 16th installment of the Madden NFL series by EA Sports, named for noted color commentator John Madden. The product features former Philadelphia Eagles quarterback Donovan McNabb on the cover. It is the first Madden game for the PlayStation Portable and Xbox 360. 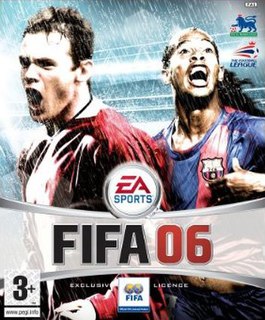 FIFA 06, also known as FIFA Soccer 06, is a video game developed by EA Canada and published by Electronic Arts based on the game of football. It was released in the United States on 4 October 2005 for the PlayStation 2, Xbox, GameCube, Microsoft Windows, and Nintendo DS. It was later released for PlayStation Portable, Game Boy Advance, and mobile phones. 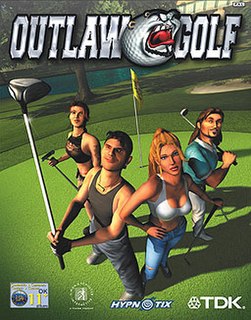 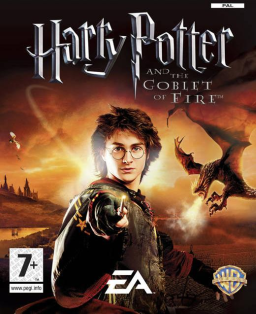 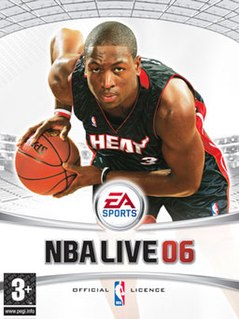 NBA Live 06 is a 2005 installment of the NBA Live series released on the Xbox, Xbox 360, Nintendo GameCube, Microsoft Windows, PlayStation Portable, PlayStation 2 and Mobile. It was developed by EA Sports. The game features several game modes, including Dynasty, Season, Playoffs, or Free Play. It features Dwyane Wade of the Miami Heat on the cover. This was the last NBA Live game on the GameCube and it also was the first NBA Live game on the Xbox 360 as a launch title and on the PlayStation Portable.

Big Mutha Truckers is a racing video game developed by British studio Eutechnyx, released in 2002. Set in fictional Hick County, the game revolves around completing trips between cities, delivering goods, and competing in races while at the helm of a semi truck. The game is available on GameCube, Xbox, PlayStation 2, and PC. It met with middling critical and commercial reception, due to repetitive gameplay, dated graphics, and lackluster sound. The game uses Steppenwolf's "Born to Be Wild" as its theme song. The sequel is Big Mutha Truckers 2. A different game of the same name was developed by Italian company Raylight Studios and released for the Game Boy Advance and Nintendo DS.

Shrek 2 is a 2004 action-adventure video game published by Activision, based on the DreamWorks Animation film of the same name. The game was developed by Luxoflux for the PlayStation 2, Xbox, and GameCube platforms, while a version for PC was developed by KnowWonder. The game received mixed to positive reception by critics.

The Chronicles of Narnia: The Lion, the Witch and the Wardrobe is an action-adventure game released in 2005 by Traveller's Tales. The game is based on the novel-adapted movie of the same name. It was released in November before the movie for most major consoles including the GameCube, PC, Xbox, PlayStation 2, Nintendo DS, and Game Boy Advance. Also in 2005, a role-playing game, a strategy game and a chess game were released for wireless phone systems by Disney Mobile. A significant feature has William Moseley, Skandar Keynes, Anna Popplewell, Georgie Henley, Elizabeth Hawthorne, and Jim Broadbent reprising their roles from the film. 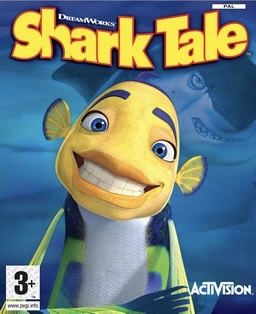 Shark Tale is a 2004 video game based on the film of the same name that was released on PlayStation 2, Microsoft Windows, Game Boy Advance, GameCube and Xbox. The Game Boy Advance version was also released on a Twin Pack cartridge bundled with Shrek 2 in 2005. The game received mixed to positive reception from critics. 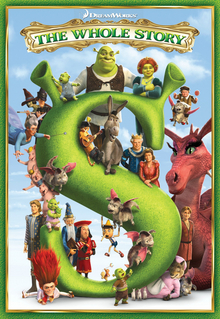 Shrek is a media franchise by DreamWorks Animation, loosely based on William Steig's 1990 picture book of the same name. It includes four computer-animated films: Shrek (2001), Shrek 2 (2004), Shrek the Third (2007), and Shrek Forever After (2010), with a fifth film currently in the works. A short 4-D film, Shrek 4-D, which originally was a theme park ride, was released in 2003.

Shrek Super Party is a party video game released in 2002 by Mass Media. The game is based on the Shrek film series. The game is similar to Pac-Man Fever and the Mario Party series of games. 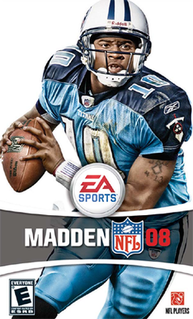 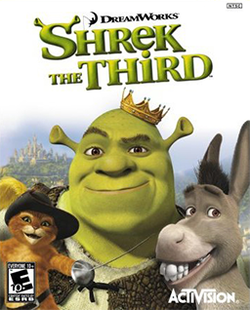 Shrek the Third is an action-adventure video game based on the 2007 DreamWorks Animation animated film of the same name, developed by Amaze Entertainment, 7 Studios, Shaba Games and Vicarious Visions. The game was published by Activision on May 15, 2007, for Game Boy Advance, Microsoft Windows, Nintendo DS, Wii, Xbox 360, PlayStation 2 and PlayStation Portable. 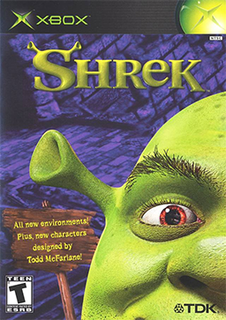 Shrek is a 2001 platform video game developed by Digital Illusions CE (DICE) and published by TDK Mediactive for the Xbox, based on the 2001 animated DreamWorks film Shrek. It is the only Shrek video game to be rated T for Teen by the ESRB. The game was released on November 15, 2001 as one of 22 North American launch titles for the Xbox and March 28, 2002 in Europe. A reworked version of the game, called Shrek Extra Large, was released for the GameCube on October 31, 2002 in North America and on October 24, 2003 in Europe. A port for the PlayStation 2 was planned for 2003, once again under the name Shrek: Extra Large, but was cancelled due to TDK Mediactive being acquired by Take-Two Interactive later that year, as a result losing the rights for Shrek games. Extra Large uses the same engine and game mechanics as the original Xbox release, but with an altered story and different levels.

Surf's Up is the video game based on the Sony Pictures Animation film of the same name. Surf's Up the video game follows the basic story of Cody Maverick in the movie. This game was developed by Ubisoft and is available for PC and for various console platforms.

Shrek Smash n' Crash Racing is a kart racing video game released in November 2006. The game is based on the Shrek franchise. Players have the option of playing one of twelve Shrek characters, using racing and combat skills to defeat other racers. It was released for the GameCube, PlayStation 2, PlayStation Portable, Nintendo DS, and Game Boy Advance systems. Shrek Smash n' Crash Racing was the final game based on a DreamWorks Animation film to be released on the GameCube.

The SpongeBob SquarePants video games are multiple collections of video games based on the Nickelodeon animated television series, SpongeBob SquarePants, which was originally created by Stephen Hillenburg. Until 2013, the vast majority of titles were published by THQ. From 2013 to 2015, the license for most titles was handed to Activision. Now the license has been picked up by THQ Nordic. Some of the installments are based on concepts from specific episodes, as well as the two theatrical releases. There are multiple distinct versions for individual games.