Side-blotched lizards are lizards of the genus Uta. They are some of the most abundant and commonly observed lizards in the deserts of western North America, known for cycling between three colorized breeding patterns [1] and is best described in the common side-blotched lizard. They commonly grow to 6 in including the tail, with the males normally being the larger sex. Males often have bright throat colors.

These lizards are prey for many desert species. Snakes, larger lizards, and birds all make formidable predators to side-blotched lizards. Larger lizard species, such as collared, leopard, and spiny lizards, and roadrunners are the main predators. In turn, the side-blotched lizards eat arthropods, such as insects, spiders, and occasionally scorpions.

As a result of their high predation rate, these lizards are very prolific breeders. From April to June, they breed, with the young emerging as early as late May. These inch-long young appear all through the summer, and into September.

The diploid chromosome number in most if not all species is 34, consisting of 12 macro- and 22 microchromosomes. [2]

Side-blotched lizards are notable for having the highest number of distinct male and female morphs within a species: three male and two female. They show a diversity of behaviors associated with reproduction, which are often referred to as "alternative reproductive tactics". [3]

This is called the rock paper scissors effect, [5] borrowed from the name of the playground game, because the outcome of the mating success shows that one morph of the lizard takes advantage over another but not over the third. [6]

The orange and blue-throated males can sometimes be seen approaching a human "intruder". One speculation is that he could be giving the female(s) a chance to escape, but whether he is defending the female has not been documented. Another speculation is that he is highly motivated to engage whenever he sees movement on his territory, which he may be interpreting as a possible intruding male, or another female.

The systematics and phylogeny of the side-blotched lizards is very confusing, with many local forms and morphs having been described as full species. [7] Following the 1997 review of Upton and Murphy, which included new data from mtDNA cytochrome b and ATPase 6 sequences, the following species can be recognized pending further research:

The specific name, lowei, is in honor of American herpetologist Charles Herbert Lowe. [8] 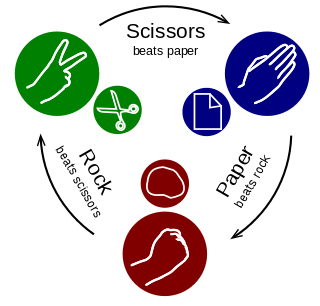 Rock paper scissors is a hand game usually played between two people, in which each player simultaneously forms one of three shapes with an outstretched hand. These shapes are "rock", "paper", and "scissors". "Scissors" is identical to the two-fingered V sign except that it is pointed horizontally instead of being held upright in the air.

The western fence lizard is a common lizard of Arizona, California, Idaho, Nevada, Oregon, Utah, Washington, Northern Mexico, and the surrounding area. As the ventral abdomen of an adult is characteristically blue, it is also known as the blue-belly.

The viviparous lizard, or common lizard,, is a Eurasian lizard. It lives farther north than any other species of non-marine reptile, and most populations are viviparous, rather than laying eggs as most other lizards do. It is the only species in the monotypic genus Zootoca. Both "Zootoca" and "vivipara" mean "live birth," in Greek and Latin respectively. It was called Lacerta vivipara until the genus Lacerta was split into nine genera in 2007 by Arnold, Arribas & Carranza. 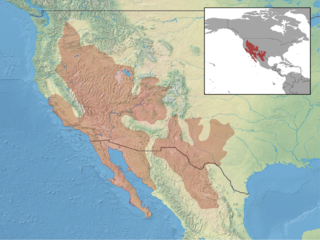 The common side-blotched lizard is a species of side-blotched lizard in the family Phrynosomatidae. The species is native to dry regions of the western United States and northern Mexico. It is notable for having a unique form of polymorphism wherein each of the three different male morphs utilizes a different strategy in acquiring mates. The three morphs compete against each other following a pattern of rock paper scissors, where one morph has advantages over another but is outcompeted by the third.

Urosaurus ornatus, commonly known as the ornate tree lizard, is a species of lizard in the family Phrynosomatidae. The species is native to the southwestern United States and northwestern Mexico. The species, which formerly was commonly called simply the "tree lizard", has been used to study physiological changes during the fight-or-flight response as related to stress and aggressive competition. Its life history and costs of reproduction have been documented in field populations in New Mexico and Arizona. It has been fairly well studied because it has interesting variation in throat color in males that can correlate with different reproductive strategies, 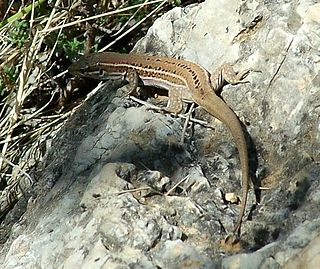 The Dalmatian wall lizard is a species of lizard in the family Lacertidae. It is found in Albania, Bosnia and Herzegovina, Croatia, Italy, Serbia, Montenegro, and Slovenia. Its natural habitats are temperate forests, Mediterranean-type shrubby vegetation, rocky areas, and pastureland.

The common flat lizard is a species of lizard in the Cordylidae family. This lizard has 9 subspecies, all living in southern Africa.

Paracerceis sculpta is a species of marine isopod between 1.3 millimetres (0.05 in) and 10.3 mm (0.41 in) in length. The species lives mainly in the intertidal zone, and is native to the Northeast Pacific from Southern California to Mexico, but has since been introduced to many other countries. Adults are herbivorous and consume algae but juveniles are carnivorous and consume moulting females. They reproduce in sponges but do not feed near them. 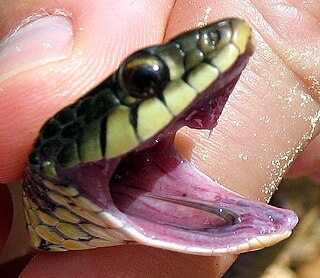 Sexual selection in scaled reptiles studies how sexual selection manifests in snakes and lizards, which constitute the order Squamata of reptiles. Each of the over three thousand snakes use different tactics in acquiring mates. Ritual combat between males for the females they want to mate with includes topping, a behavior exhibited by most viperids in which one male will twist around the vertically elevated fore body of its opponent and forcing it downward. It is common for neck biting to occur while the snakes are entwined.

Isla Gallo, is an island in the Gulf of California east of the Baja California Peninsula. The island is uninhabited and is part of the La Paz Municipality. 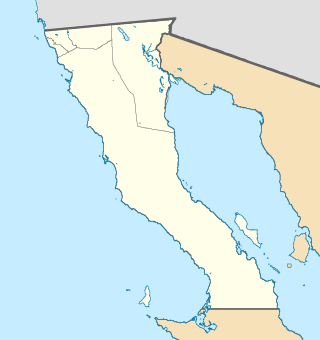 Isla El Muerto, is an island in the Gulf of California east of the Baja California Peninsula. The island is uninhabited and is part of the Mexicali Municipality.

Isla Flecha, or the Arrow, aka Isla El Borrego, is an island in the Gulf of California, located within Bahía de los Angeles east of the Baja California Peninsula. The island is uninhabited and is part of the Ensenada Municipality.

Isla Piojo, or Lice Island, is an island in the Gulf of California, located within Bahía de los Ángeles east of the Baja California Peninsula. The island is uninhabited and is part of the Ensenada Municipality.

Barry R. Sinervo (1960/1961–2021) was a behavioral ecologist and evolutionary biologist. He was a full professor at University of California Santa Cruz where his research interests included game theory, climate change, herpetology, and animal behavior. One of his major discoveries was of a rock-paper-scissors game in side-blotched lizard mating behaviour. He also discovered evidence of the Baldwin effect in the side-blotched lizard. Sinervo was born in Port Arthur, Ontario, Canada, and educated at Dalhousie University, Nova Scotia, and the University of Washington, Seattle. He died from cancer at age 60 on March 15, 2021.