St Kevin's College (also called Redcastle) in Oamaru, New Zealand, is a Catholic, coeducational, integrated, boarding and day, secondary school. It was founded by the Christian Brothers in 1927 for boys and became a co-educational school in 1983 when the Dominican Sisters closed down their school at Teschemakers. The College became a state integrated school in 1983. [3] [4] The Christian Brothers ceased to be on the teaching staff of the college in the late 1990s but remained the school's proprietor, and so appointed representatives to the college board, until 2019 when they transferred the ownership of St Kevin's College to the Bishop of Dunedin. [5] [6]

In February 1983 St Kevin's became co-educational. Until 1979 girls boarded at Teschemakers, a secondary school located about 12 km south of Oamaru. St Kevin's College currently has boarding capacity for over 100 girls. [4] Also in 1983, the college was integrated as a College with a "special character" under the Private Schools Conditional Integration Act 1975. The special character is broadly the connection of the school with the Catholic faith. Preference of enrolment is given to students who have established a link with the Catholic Church through baptism or membership of a parish. Preference is decided by the appropriate parish priest in each case. A preference certificate from the student's parish is required for each student with their application for enrolment at the school. Under the Act, the school may enrol "non-preference" students but the enrolment of such students is restricted to 5% of the total roll. [9]

Students come mainly from Oamaru and the surrounding rural areas (many of them ex-pupils of St Joseph's School, Oamaru) with some coming from more distant New Zealand and overseas locations. The school benefits from modern facilities and spacious grounds to provide, amongst other learning opportunities, an equestrian academy, a primary-industry trades academy, and opportunities in the media and a wide range of sports activities. [10]

The college has produced seven All Blacks and one Silver Fern. Students participate in many sports including: hockey, rugby, basketball, soccer, netball, swimming, rowing, cricket, tennis, squash, badminton, skiing, snowboarding, multi-sport, athletics, tramping and kayaking. Swimming, athletic and cross-country sports are particularly emphasised and all students participate. [11] The college has its own golf course, swimming pool, turf and gymnasium. [12] St Kevins strongly participates in Rugby competitions. There is an annual game with Waitaki Boys' High School (located near Redcastle) for the Leo O’Malley Memorial Trophy ("the peanut"). This attracts up to 5000 spectators in anticipation of a tight match. Over the years Waitaki has been a more frequent winner hoisting the trophy on 53 occasions to St Kevin's 21 wins with 5 draws. This rivalry is often referred to as "the blooder" by St Kevin's students, originating from St Kevin's students calling Waitaki Boys blood nuts because of the colour of their blazers. [11] [13]

The College emphasises public speaking, singing, drama, debating, choirs, dance, reading aloud, role plays and scripture reading. Cultural activities, such as the annual choral festival and annual production, are timetabled into the school year so that all students are involved to some degree. The College participates in the annual Bishop's Shield Competition which it has won several times. Debating is also encouraged. Many students learn music and learn to play musical instruments within the school day. The college has music ensembles and some students play in groups and orchestras outside the college. There is a Chapel Choir for College liturgical events. [14]

In 2019 a million-dollar upgrade of the five-building hostel block was commenced with the aim of attracting more boarding student enrolments. The improvements were funded by the Christian Brothers. [6]

The establishment of a Catholic boarding school for boys in Otago was first proposed 1890. However, it was not until 1925 that the preparations for the establishment began. The Bishop of Dunedin, James Whyte, asked the Christian Brothers to set up the school. They had, from 1876, conducted the Christian Brothers School in Dunedin. [15] This school had for a time taken boarders in a hostel which operated from 1919 until 1924. [16] Various sites were inspected by the Bishop and the Provincial of the Christian Brothers, P. I. Hickey, and the property called "Redcastle" in Oamaru was chosen as the most suitable site. [15]

The site of the college was originally developed by the McLean and Buckley families. John McLean was born on the island of Mull, Scotland, in 1818. He (with his brothers) made his fortune in developing and exploiting High Country sheep stations (particularly "Morven Hills" in the Lindis Pass) and by selling them at the right time. [17]

The original homestead was one-storied with a thatched roof. When the old house burned down, Buckley built the red brick residence with Oamaru stone facing, now known as the "Castle" and, since he was very fond of horse-racing, he built large stables (a building now named "The Stables"), St John Buckley died in 1915 and his son, also named John Buckley, sold the property to a syndicate of local people. The property was called "Redcastle". [20] [21]

In May 1926, Brother Moore, who had experience in fund-raising, came to Dunedin to organise a bazaar and lottery to fund the purchase of the land and the establishment of the college. His confrere, Brother Dowd, toured the country districts to collect donations. These initiatives resulted in a fund of £7000. In 1926, the construction of the buildings began under the supervision of Brother Prunster. [15]

The college was named after the Irish saint, Kevin (498–618), the founder of the monastery and school of Glendalough. The blessing and opening of the college took place on Sunday, 6 February 1927. There were several Bishops present: Archbishop Redwood and Bishops O'Shea, Whyte, Cleary, Brodie and Liston. There were many priests and more than 2,500 friends and well-wishers present coming from Dunedin and nearby parts of both Otago and Canterbury. [15] Classes commenced on Tuesday, 8 February 1927. There were 60 boarders and 31 day students. The Christian Brothers on the first staff were Brother Magee (the Rector) and Brothers Bowler, Brennan, Le Breton, Dowd, Ryan, Mills and Maye. [23] The Rector of Waitaki Boys' High School, Frank Milner, was present at the opening. When Frank Milner ("a firm friend of St Kevin's") died in 1944, the St Kevin's Boys formed a guard of honour for his remains as they left the church after the funeral service. [24]

For its first 55 years, St Kevin's College was typical of Christian Brother boarding institutions in Australia and New Zealand. They were designed to provide a Catholic education for the sons of rural Catholic families. For the Christian Brothers they were places of particularly hard work. Individual Brothers taught throughout the day, coached sports teams after school, supervised meals and study, and were responsible for the dormitories at night. The Brothers generally had to be young men with energy. [25]

The college has produced 19 Christian Brothers and 7 Brothers belonging to other Religious Orders, 101 Priests[ citation needed ], 1 Bishop, 1 Archbishop (who was also a cardinal). In sport, 2 Silver Ferns and 7 All Blacks (including 3 captains) have been students at St Kevin's. 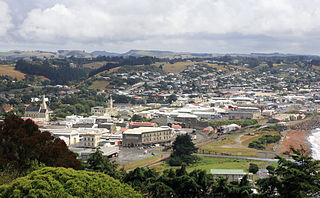 Oamaru is the largest town in North Otago, in the South Island of New Zealand, it is the main town in the Waitaki District. It is 80 kilometres (50 mi) south of Timaru and 120 kilometres (75 mi) north of Dunedin on the Pacific coast; State Highway 1 and the railway Main South Line connect it to both cities. With a population of 13,700, Oamaru is the 28th largest urban area in New Zealand, and the third largest in Otago behind Dunedin and Queenstown. 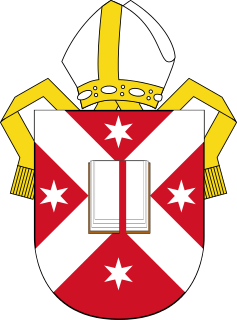 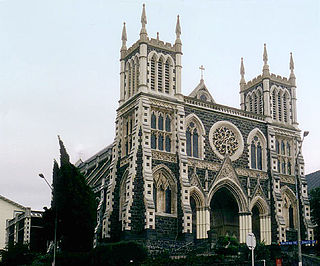 Michael Paul Nunan, CFC was a member of the Congregation of Christian Brothers and an influential educationalist in New Zealand, Victoria and, especially, Western Australia. 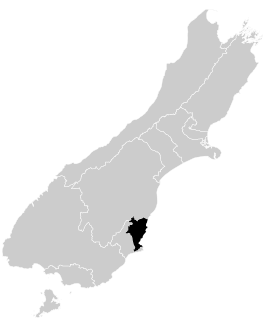 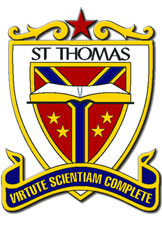 The North Otago Cricket Association was founded in 1899 for the growing interest of cricket in the district. The NOCA is now over 100 years old and the cricket is as strong as ever, being a recent holder of the Hawke Cup, and the Oamaru Cricket Club being the third oldest cricket club in New Zealand.

St Joseph's School is a school in Oamaru, the largest town in North Otago, in the South Island of New Zealand. It was established by an order of Catholic nuns — Dominican Sisters — who started teaching in Oamaru in 1882. It is associated with St Patrick's Basilica, Oamaru

Kevin Lawrence Skinner was a rugby union player from New Zealand who won 20 full caps for the All Blacks, two of them as captain. He was also a heavyweight boxer, winning the New Zealand championship in 1947.