"Sugar Baby Love", recorded in autumn 1973 [3] and released in January 1974, is a bubblegum pop song, and the debut single of The Rubettes. Written by Wayne Bickerton and Tony Waddington and produced by Bickerton, engineered by John Mackswith at Lansdowne Recording Studios, and with lead vocals by Paul Da Vinci, "Sugar Baby Love" was the band's one and only number one single in the UK Singles Chart, spending four weeks at the top of the chart in May 1974. [4]

Bickerton and Waddington had been writing songs together since they were both members of the Pete Best Four in Liverpool in the early 1960s. Their biggest success had been writing "Nothing but a Heartache", a US hit for The Flirtations in 1968.

In the early 1970s, they came up with the idea for a rock 'n' roll musical. [5] They co-wrote and produced a demonstration recording of "Sugar Baby Love", recorded October 1973 with "Tonight", "Juke Box Jive" and "Sugar Candy Kisses" (which became a hit for Mac and Katie Kissoon). [6] They originally intended to submit it for the Eurovision Song Contest but instead offered it to Showaddywaddy and Carl Wayne, who both turned it down. [7]

They then offered it to the demo musicians, provided that they would become an actual group. With the exception of the recording's lead singer, Paul Da Vinci, who had signed a solo recording contract with Penny Farthing Records. Surprisingly, only John Richardson, who played drums and spoke the "please take my advice," Alan Williams, who sang in the chorus backing vocal group and Pete Arnesen who played piano [8] would sign up and later become a member of The Rubettes. [9]

"We had Paul DaVinci singing in that incredibly high falsetto voice and then a vocal group sings 'Bop-shu-waddy' over and over for about 3 minutes. Gerry Shury, who did the string arrangements, said, 'This is not going to work: you can't have a vocal group singing 'Bop-shu-waddy' non-stop.' A lot of people said the same thing to us and the more determined I became to release it. The record was dormant for 6 or 7 weeks and then we got a break on Top of the Pops and it took off like a rocket and sold 6 million copies worldwide. Gerry said to me, 'I'm keeping my mouth shut and will concentrate on conducting the strings.'" [13]

"I Honestly Love You" is a song recorded by Olivia Newton-John and which in 1974 became a worldwide pop hit – her first number-one single in the United States and Canada. It remained her signature solo song until the 1981 hit "Physical". The single was first released in Australia as "I Love You, I Honestly Love You", as per its chorus. 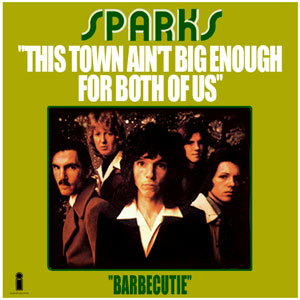 "This Town Ain't Big Enough for Both of Us" is a song written by Ron Mael of the American pop group Sparks. It is the opening track on their 1974 album Kimono My House, and was the lead single from the album. Although it did not chart on the Billboard Hot 100, "This Town Ain't Big Enough for Both of Us" achieved major success in Europe, peaking within the top ten of the charts in the Netherlands, Switzerland and the United Kingdom. In the latter country, the song peaked at number two on the UK Singles Chart, where it remained for two consecutive weeks. The song has become the highest-charting for Sparks on the UK Singles Chart, held off from the top spot by The Rubettes' bubblegum pop song "Sugar Baby Love". 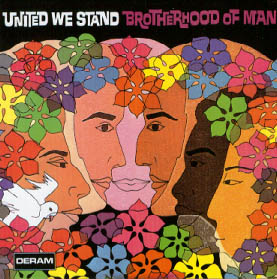 United We Stand is the debut album by The Brotherhood of Man. It was released in 1970 on Deram.

Longplay Album – Volume II was the second album by the Dutch soundalike studio group Stars on 45, released on the CNR Records label in The Netherlands in August 1981. In the US the album was retitled Stars On Long Play II, released on Radio Records and credited to 'Stars On'. In the UK, Ireland, Australia and New Zealand the album was listed as Stars on 45 Volume 2 or Stars on 45 - The Album - Volume 2, credited to Starsound and issued on CBS Records. Just like the first Stars on 45 album Longplay Album – Volume II was also officially released in the Eastern Bloc by state-owned czechoslovak label Opus, credited to Stars On 45 but under the title Stars on 45 - Volume II.