Thomas Strunz (born 25 April 1968) is a German retired footballer who played mostly as a defensive midfielder.

Over the course of 12 seasons, he amassed Bundesliga totals of 235 games and 32 goals, representing in the competition Bayern Munich and Stuttgart. He won 12 major titles with the first club.

Born in Duisburg, North Rhine-Westphalia, Strunz started his career playing for hometown club MSV Duisburg, but moved to FC Bayern Munich aged 21. He made his Bundesliga debut on 31 August 1989 in a 4–0 home win against Hamburger SV, and proceeded to score five goals in 20 matches in his first season.

Strunz joined VfB Stuttgart for 1992–93, netting five times in his debut campaign before returning to Bayern after three years. [3] In his two spells with the Bavarian side he won five championship medals and two German cups, adding the 1995–96 UEFA Cup in which he scored two goals in nine games. In his final two seasons he played rarely due to recurrent injuries, and retired in late 2000 as his team went on to win back-to-back league titles.

After retiring, Strunz served as general manager at VfL Wolfsburg for nearly a year, being fired on 19 December 2005 – head coach Holger Fach was sacked on the same day, and the former was awarded €2.750.000 in compensation. [4] In April 2008 he enrolled in the same capacity at lowly Rot-Weiss Essen, being fired on 12 September of the following year.

During the latter competition, Strunz appeared in five of six matches (being sent off against Italy and subsequently suspended for the quarter-final), converting his penalty shootout attempt in the semi-finals and playing the entire final against the Czech Republic.

On 10 March 1998, he was one of the main targets in a furious press conference held by Bayern manager Giovanni Trapattoni, who addressed the media in broken German. [6] [7] 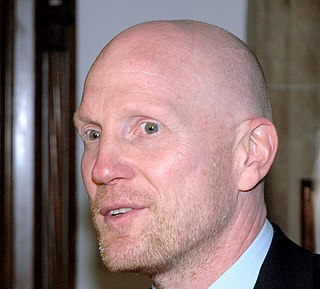 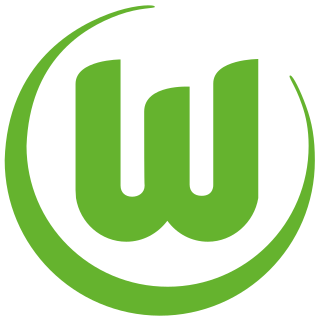 Verein für Leibesübungen Wolfsburg e. V., commonly known as VfL Wolfsburg or Wolfsburg, is a German professional sports club based in Wolfsburg, Lower Saxony. The club grew out of a multi-sports club for Volkswagen workers in the city of Wolfsburg. It is best known for its football department, but other departments include badminton, handball and athletics.

Stefan Effenberg is a German former footballer who most recently acted as sporting director for KFC Uerdingen 05. A central midfielder, he was known for his leadership skills, passing range, shooting ability, and physical strength, but was also a temperamental and controversial character.

The 2000–01 Bundesliga was the 38th season of the Bundesliga, Germany's premier football league. It began on 11 August 2000 and ended on 19 May 2001. FC Bayern Munich successfully defended their title after a last-minute Patrik Andersson goal denied Schalke 04 their first title.

The 1997–98 Bundesliga was the 35th season of the Bundesliga, Germany's premier football league. It began on 1 August 1997 and ended on 9 May 1998. FC Bayern Munich were the defending champions. FC Kaiserslautern won the Bundesliga on 1 May 1998 with one match remaining, the only time to date that a newly-promoted team has won the league. 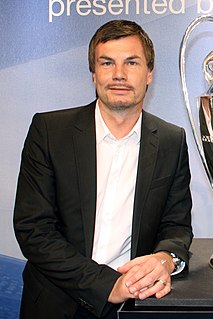 Thomas Helmer is a German former footballer. His preferred playing position was sweeper, but he was primarily deployed as a centre-back. 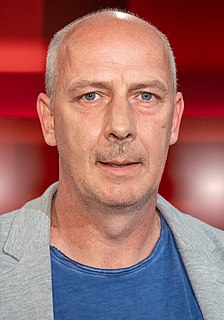 Mario Basler is a German football manager and former professional player who mainly played as a right midfielder. He is currently at TSG Eisenberg as a player and advisor. 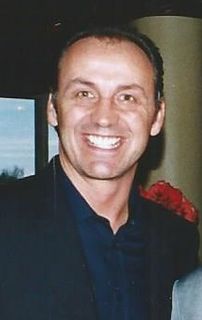 Jürgen Kohler is a World Cup-winning German footballer and manager, who played as a centre-back. Since 2018, he has been in charge of the youth team of Viktoria Köln.

Michael Tarnat is a German former professional footballer, currently employed by Bayern Munich as the leader of the U12–U16 youth teams. A left-footed full-back, he was also employed as a left wingback and occasionally as a defensive midfielder. His nickname is "Tanne", meaning "fir" in English. He ended his career with Hannover 96, having previously played for MSV Duisburg, Karlsruher SC, Bayern Munich and Manchester City. A veteran of 19 caps for Germany, Tarnat also participated in the 1998 FIFA World Cup. He is renowned for his powerful free kicks and similar long-shots with his strong left foot.

Roland Wohlfarth is a former professional footballer who played as a forward.

Benjamin Jacques Marcel Pavard is a French professional footballer who plays as a right back for Bundesliga club Bayern Munich and the France national team. Although usually deployed as a right-back, he is also capable of playing as a centre-back. 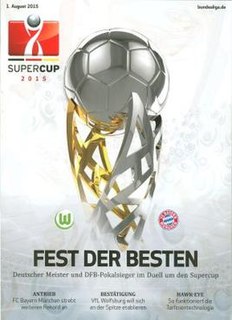 The 2017–18 DFB-Pokal was the 75th season of the annual German football cup competition. Sixty-four teams participated in the competition, including all teams from the previous year's Bundesliga and the 2. Bundesliga. The competition began on 11 August 2017 with the first of six rounds and ended on 19 May 2018 with the final at the Olympiastadion in Berlin, a nominally neutral venue, which has hosted the final since 1985. The DFB-Pokal is considered the second-most important club title in German football after the Bundesliga championship. The DFB-Pokal is run by the German Football Association (DFB).

The 2019–20 FC Bayern Munich season was the 121st season in the football club's history and 55th consecutive and overall season in the top flight of German football, the Bundesliga, having been promoted from the Regionalliga in 1965. Bayern Munich also participated in this season's edition of the domestic cup, the DFB-Pokal, and the premier continental cup competition, the UEFA Champions League. Bayern were the reigning Bundesliga champions and therefore participated in the German super cup, the DFL-Supercup.

The 2020–21 season was the 122nd season in the existence of FC Bayern Munich and the club's 56th consecutive season in the top flight of German football. In addition to the domestic league, Bayern Munich participated in this season's editions of the DFB-Pokal, the DFL-Supercup, the UEFA Champions League, the UEFA Super Cup, and the FIFA Club World Cup. The season covered the period from 24 August 2020 to 30 June 2021.