Thorelliola is a genus of jumping spiders that was first described by Embrik Strand in 1942. [2] It is named after arachnologist Tamerlan Thorell.

Embrik Strand was an entomologist and arachnologist who classified many insect and spider species including the greenbottle blue tarantula.

As of August 2019 [update] it contains nineteen species, found in Asia, on the Marshall Islands, in Kiribati, Papua New Guinea, and on the Polynesian Islands: [1]

The Marshall Islands, officially the Republic of the Marshall Islands, is an island country and a United States associated state near the equator in the Pacific Ocean, slightly west of the International Date Line. Geographically, the country is part of the larger island group of Micronesia. The country's population of 53,158 people is spread out over 29 coral atolls, comprising 1,156 individual islands and islets. The capital and largest city is Majuro.

Kiribati, officially the Republic of Kiribati, is a sovereign state in Micronesia in the central Pacific Ocean. The permanent population is just over 110,000 (2015), more than half of whom live on Tarawa Atoll. The state comprises 32 atolls and reef islands and one raised coral island, Banaba. They have a total land area of 800 square kilometres (310 sq mi) and are dispersed over 3.5 million square kilometres.

Papua New Guinea, officially the Independent State of Papua New Guinea is a country in Oceania that occupies the eastern half of the island of New Guinea and its offshore islands in Melanesia, a region of the southwestern Pacific Ocean north of Australia. Its capital, located along its southeastern coast, is Port Moresby. The western half of New Guinea forms the Indonesian provinces of Papua and West Papua. It is the world's 3rd largest island country with 462,840 km2 (178,700 sq mi).

Wayne Paul Maddison, is a professor and Canada Research Chair at the departments of zoology and botany at the University of British Columbia, and the Scientific Director of the Beaty Biodiversity Museum.

Barbara Maria Patoleta is a Polish arachnologist who specialises in the taxonomy, evolution and zoogeography of jumping spiders in the Pacific Islands.

The genus Argiope includes rather large spiders that often have a strikingly coloured abdomen. These spiders are distributed throughout the world. Most countries in tropical or temperate climates host one or more species that are similar in appearance. The etymology of Argiope is from a Latin word argentum meaning silver. The carapace of Argiope species is typically covered in silvery hairs.

Gasteracantha is a genus of orb-weaver spiders first named by Carl Jakob Sundevall in 1833. The females of most species are brightly colored with six prominent spines on their broad, hardened, shell-like abdomens. The name Gasteracantha is derived from the Greek gaster (γαστήρ), meaning "belly, abdomen", and akantha (άκανθα), meaning "thorn, spine". Spiny-backed orb-weavers are sometimes colloquially called "crab spiders" because of their shape, but they are not closely related to the true crab spiders. Other colloquial names for certain species include thorn spider, star spider, kite spider, or jewel spider.

Cybaeidae is a family of spiders first described by Nathan Banks in 1892. The diving bell spider or water spider Argyroneta aquatica is currently included in this family, though it may soon be moved to Dictynidae. 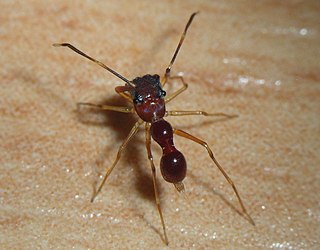 Agorius is a genus of spiders in the family Salticidae. The genera Agorius and Synagelides are separated as a genus group, sometimes called subfamily Agoriinae but more recently downranked to tribe Agoriini of the Salticoida clade in subfamily Salticinae.

Bathippus is a genus of jumping spiders. 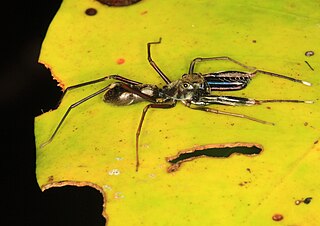 Diolenius is a genus of the spider family Salticidae, found in New Guinea and nearby islands.

Helpis is a genus of the spider family Salticidae.

Omoedus is a genus of jumping spiders that was first described by Tamerlan Thorell in 1881.

Pristobaeus is a genus of jumping spiders that was first described by Eugène Louis Simon in 1902.

Thiania is a genus of jumping spiders that was first described by Ludwig Carl Christian Koch in 1846.

Xenocytaea is a genus of spiders in the Salticidae family (jumping spiders).

Zenodorus is a genus of the jumping spiders distributed from the Moluccas to Australia, including several islands of the Pacific. It was once considered a junior synonym of Omoedus, but this was later rejected. At least one species, Z. orbiculatus, specializes on hunting ants.

Ohilimia is a spider genus of the Salticidae family.

Euophryinae is a subfamily of jumping spiders.

Parabathippus is a genus of Southeast Asian jumping spiders that was first described by J. X. Zhang & Wayne Paul Maddison in 2012.