Thorneloe University is a Canadian federated school of Laurentian University in Sudbury, Ontario.

In addition to classroom, administrative and faculty offices, Thorneloe University houses a 143-seat theatre and a 58-room student residence. The university is also home to the Fielding Memorial Chapel of St. Mark. 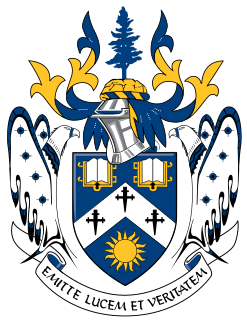 Laurentian University, which was incorporated on March 28, 1960, is a mid-sized bilingual university in Greater Sudbury, Ontario, Canada.

A Bachelor of Fine Arts is the standard undergraduate degree for students in the United States and Canada seeking a professional education in the visual or performing arts.

George Brown College of Applied Arts and Technology is a public, fully accredited college of applied arts and technology with three full campuses in downtown Toronto. Like many other colleges in Ontario, GBC was chartered in 1966 by the government of Ontario and opened the next year.

The New York University Tisch School of the Arts is the performing, cinematic and media arts school of New York University. Founded on August 17, 1965, Tisch is a training ground for artists, scholars of the arts, and filmmakers; the school merges the technical training of a professional school with the academic resources of a major research university to immerse students in their intended artistic disciplines. The school is divided into three Institutes: Performing Arts, Emerging Media, and the Kanbar Institute of Film & Television. Many undergraduate and graduate disciplines are available for students, including: acting, dance, drama, performance studies, design for stage and film, musical theatre writing, photography record producing, game design and development, and film and television studies.

St. Lawrence College (SLC) is a College of Applied Arts and Technology with three campuses in Eastern Ontario, namely Brockville (1970), Cornwall (1968) and Kingston.

The UCLA School of Theater, Film and Television, is one of the 11 schools within the University of California, Los Angeles (UCLA) located in Los Angeles, California. Its creation was groundbreaking in that it was the first time a leading university had combined all three of these aspects into a single administration. The undergraduate program is often ranked among the world's top drama departments. The graduate programs are usually ranking within the top three nationally, according to the U.S. News & World Report. Among the school's resources are the Geffen Playhouse and the UCLA Film & Television Archive, the world's largest university-based archive of its kind, celebrating its 50th anniversary in 2015. The Archive constitutes one of the largest collections of media materials in the United States — second only to the Library of Congress in Washington, D.C. Its vaults hold more than 220,000 motion picture and television titles and 27 million feet of newsreel footage. The film, television, and digital media program is one of the most prestigious film programs in the world. It is the most selective film school as the film and television major selects about only 15 freshman out of thousands of applicants and a handful of transfer students.

An affiliated school or affiliated college is an educational institution that operates independently, but also has a formal collaborative agreement with another, usually larger institution that may have some level of control or influence over its academic policies, standards or programs. 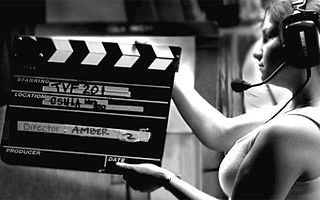 Studio 58 is a professional theatre training school in Vancouver, Canada. A part of Langara College's Theatre Arts Program, the school offers a three-year program for acting students and a two-year program for production students. A Bachelor of Fine Arts is offered with an additional year of study through a partnership with Capilano University. It is distinguished as one of the top theatre schools in Canada and the only conservatory-style theatre training program in Western Canada.

Established in 1986, the College of Fine, Performing, and Communication Arts (CFPCA) at Wayne State University, in the Midtown neighborhood of Detroit in the US state of Michigan, is home to 16 undergraduate, 11 graduate, and four certificate programs in Art, Communication, Dance, Music and Theater. These programs are led by faculty, and many of the college's alumni have gained recognition and received accolades for achievements in their fields.

The University of the Arts Helsinki, also known as Uniarts Helsinki, is a Finnish arts university that was launched in the beginning of 2013. Apart from a few exceptions, it is the only university in Finland that provides education in the fields it represents.