Three Days Grace is the debut studio album by Canadian rock band Three Days Grace, released on July 22, 2003 through Jive Records. It was the band's only album as a trio, and also under Bertelsmann Music Group.

Prior to being named Three Days Grace, the band was known as Groundswell. Three Days Grace garnered the attention of many record labels after the release of their demo, largely due to the song, "I Hate Everything About You". Eventually, Three Days Grace signed with Jive, and began recording their debut album in Massachusetts. The single "I Hate Everything About You" was released in promotion for the album. [5] In its first week sales, it sold no more than 34,000 copies. [6] The album sold 356,000 copies in the US by 2004 and in 2006, it sold over 1.2 million copies. [7] [8] [9] The album also sold 5,000 copies in its first week in Canada. [10] According to Nielsen SoundScan, the album has since sold over 335,000 units in Canada. [11] To support the album, the band went on tour in 2004 called the "Three Days Grace World Tour". [12] The group also supported Nickelback on "The Long Road Tour" in 2003, Evanescence on a North American tour and Hoobastank on the "Let it Out Tour" in 2004. [13] [14] [15]

The album was met with positive reviews from most music critics. Heather Phares of AllMusic gave the album a positive review, saying, "Although this debut is a little uneven, it's also promising. Three Days Grace are definitely one of the most accessible alt-metal bands of the 2000s; they just need to add some more distinctiveness to their sound." [1] In another positive review, Sputnikmusic said, "this is a very good debut CD from this band, there are very few flaws, and the music is all very good and it's great to listen to. Looking ahead, I see only good things for this band...although, with only one CD under their belts, it's too early to tell." [19] Dave Doray of IGN gave another positive review, saying, "almost every single song from the Three Days Grace track list is heavy and catchy, with chewy chunks of assurance and fury thrown in for added measure." [16]

The album has been certified platinum in Canada [20] and 2× Platinum in the US. [21] The lead single "I Hate Everything About You" was nominated for "Best Rock Video" and "People's Choice: Favourite Canadian Group" at the 2004 MuchMusic Video Awards. [22] Producer Gavin Brown won "Producer of the Year" for the song at the 2004 Juno Awards. [23]

All tracks are written by Three Days Grace and Gavin Brown except where noted. 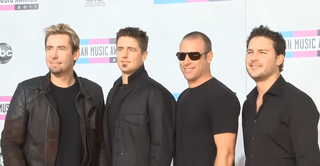 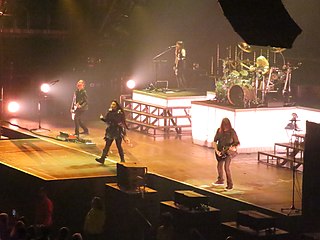 Evanescence is an American rock band founded in Little Rock, Arkansas in 1995 by singer and musician Amy Lee and guitarist Ben Moody. After recording independent EPs as a duo in the late 90's, and a demo CD, Evanescence released their debut studio album, Fallen, on Wind-up Records in 2003. Propelled by the success of hit singles "Bring Me to Life" and "My Immortal", Fallen sold more than 17 million copies worldwide, garnering the band two Grammy Awards out of six nominations. A year later, the band released their first live album and concert DVD, Anywhere but Home, which sold over one million copies worldwide. 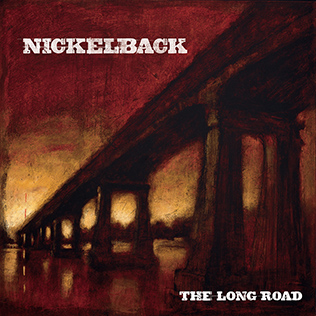 The Long Road is the fourth studio album by Canadian rock band Nickelback, released on September 23, 2003. Recorded at the famed Greenhouse Studios in Vancouver, British Columbia, it is the band's last album with Ryan Vikedal as drummer, and features a notable change in style towards more aggressive riffs and double bass drumming. 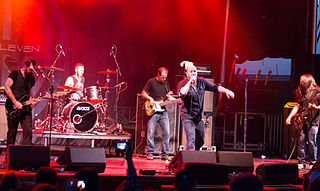 Finger Eleven is a Canadian rock band from Burlington, Ontario, formed in 1990. They have released seven studio albums, with their album The Greyest of Blue Skies bringing them into the mainstream. Their 2003 self-titled album achieved Gold status in the United States and Platinum in Canada, largely from the success of the single "One Thing", which marked the band's first placing on the US Hot 100 Chart at number 16. Their 2007 album, Them vs. You vs. Me launched the single "Paralyzer", which went on to top the Canadian Hot 100 and both US rock charts, as well as reaching No. 6 on the US Hot 100 and No. 12 on the Australian Singles Chart. They won the Juno Award for Rock Album of the Year in 2008. The same album was later certified gold in the US and multi-platinum in Canada. They released their sixth studio album, Life Turns Electric, on October 5, 2010; it was nominated as Best Rock Album of the Year at the Juno Awards of 2011. Five Crooked Lines, their 7th studio album, was released in 2015. Between 1995 and 2016, Finger Eleven was among the top 75 best-selling Canadian artists in Canada and among the top 25 best-selling Canadian bands in Canada. 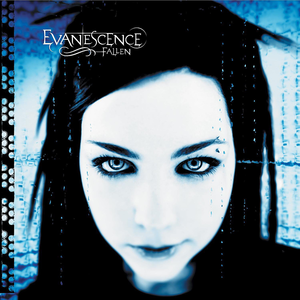 Fallen is the debut studio album by American rock band Evanescence, released on March 4, 2003 by Wind-up Records. Co-founders singer and pianist Amy Lee and guitarist Ben Moody began writing and recording songs as Evanescence in 1995, and after releasing several EPs and a demo CD, Evanescence signed to Wind-up in January 2001. Several of the songs from their earlier independent releases feature on Fallen. The album was recorded between August and December 2002 in several studios in California. It is Evanescence's only album to feature Moody, who left the band in October 2003. 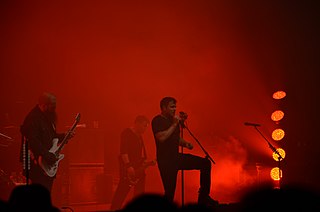 Three Days Grace is a Canadian rock band formed in Norwood, Ontario in 1992 originally as "Groundswell" and played in various local Norwood backyard parties and area establishments before disbanding in 1995 and regrouping in 1997. 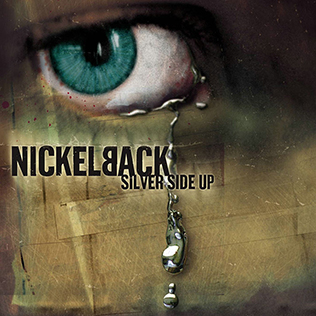 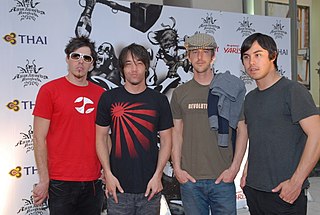 Hoobastank is an American rock band formed in 1994 in Agoura Hills, California, by lead vocalist Doug Robb, guitarist Dan Estrin, drummer Chris Hesse, and original bassist Markku Lappalainen. They were signed to Island Records from 2001 to 2012 and have released six albums and one extended play to date. Their most recent album, Push Pull, was released on May 25, 2018. They have sold 10 million albums worldwide. The band is best known for their biggest hit single, "The Reason". 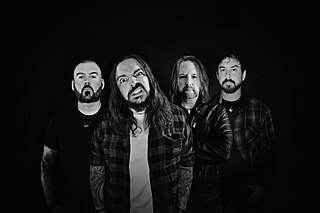 Seether are a South African rock band founded in 1999 in Pretoria, Gauteng, South Africa. The band originally performed under the name Saron Gas until 2002, when they moved to the United States and changed it to Seether to avoid confusion with the deadly chemical known as sarin gas. Lead vocalist and guitarist Shaun Morgan is the band's longest serving member, bassist Dale Stewart joined shortly after formation while drummer John Humphrey joined them for the band's second album. Since 2018, the band has been employing second guitarist Corey Lowery. Several notable guitarists like Corey's brother Clint and Troy McLawhorn have toured or recorded with the band, however, Shaun has recorded most guitar parts for the band's records. 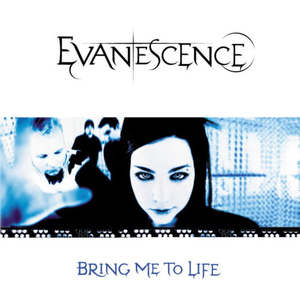 "Bring Me to Life" is the debut single by American rock band Evanescence from their debut studio album, Fallen (2003). Wind-up released it as the album's lead single on April 7, 2003. The song was written by Amy Lee when she was 19, after an exchange with an acquaintance during a time she was in relationship turmoil; the song is about having been desensitized and realizing all the things she had been missing in life. Guitarist Ben Moody and David Hodges also have songwriting credit on the song, which features guest vocals from Paul McCoy of the band 12 Stones. Produced by Dave Fortman, "Bring Me to Life" is a nu metal and goth metal crossover song. The male vocal-rap was forced by the label against Lee's wishes, in order to market it in the musical landscape of the time.

Post-grunge is a derivative of grunge that has a less abrasive or intense tone than traditional grunge. Originally, the term was used almost pejoratively to label mid-1990s rock bands such as Bush, Candlebox and Collective Soul that emulated the original sound of grunge. 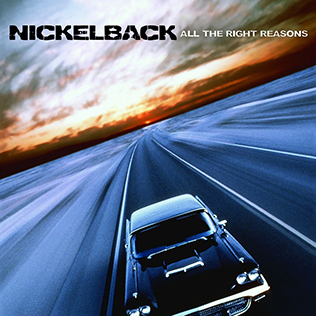 All the Right Reasons is the fifth studio album by Canadian rock band Nickelback, released on October 4, 2005, on Roadrunner Records. It is the band's first album with former 3 Doors Down drummer Daniel Adair, who replaced Ryan Vikedal in January 2005. The album topped the Canadian Albums Chart and the US Billboard 200 albums chart and has sold 11 million copies worldwide. It is Nickelback's best-selling album to date, according to certifications from the CRIA, the RIAA, the BPI, and the ARIA. Seven singles were released from the album. The album re-entered the Finland Albums Chart in 2010, setting a new peak position at number 21. 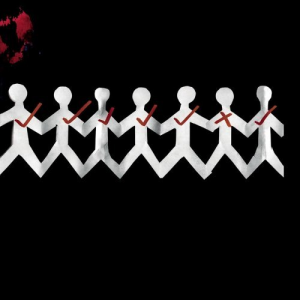 One-X is the second studio album by Canadian rock band Three Days Grace. It was produced by Howard Benson and is the band's first album recorded as a four-piece band, as Barry Stock joined the group and took over lead guitar from lead singer Adam Gontier. It is their first and only album under Sony BMG, the successor to Sony Music Entertainment's original roots and Bertelsmann Music Group. The Sony BMG joint venture was dropped in 2008, which led to Bertelsmann's Sony BMG stake going back to Sony. 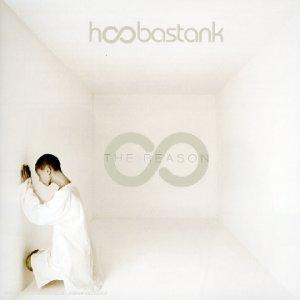 The Reason is the second studio album by American rock band Hoobastank, released on December 9, 2003 by Island Records. Produced by Howard Benson, it was the band's last album to feature bassist Markku Lappaleinen prior to his departure in 2005.

"Wake Up" is a song by Canadian rock band Three Days Grace, from their debut studio album Three Days Grace. The song was released on January 10, 2005 as the fourth and final single from the album. It was released exclusively in Canada as a radio-only single. The radio edit version changes the original line, "you're not drunk enough to fuck" to "you're just not drunk enough to talk."

Three Days Grace is a Canadian rock band that formed in 1997. They have released seven studio albums, four extended plays, twenty six singles, two video albums, and eighteen music videos. They signed with Jive Records and released three albums on the label between 2003 and 2009 before the label was folded into the RCA Records umbrella in 2011; the band has released music through that label since then. 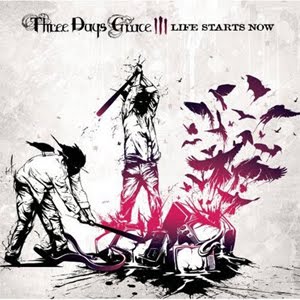 Life Starts Now is the third studio album by the Canadian rock band Three Days Grace. The album was released on September 22, 2009. It was produced by Howard Benson. It was the second time in a row that the band has worked with him, after the commercially successful One-X. Life Starts Now expresses a lighter lyrical mood compared to the previous album. It is the first Three Days Grace album to be released by Sony Music Entertainment and the last to be released by Jive Records, as Sony disbanded the label in 2011. 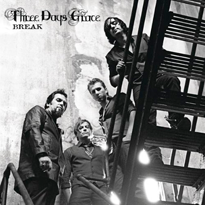 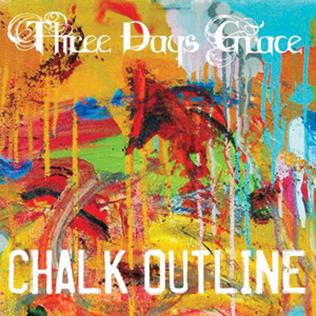 "Chalk Outline" is the lead single from Canadian rock band Three Days Grace's fourth album, Transit of Venus. The band released many "snippets" of the song before August 14 to tease fans. It reached No. 1 on the U.S. Active Rock chart for a total of 10 weeks and won the "Rock Song of the Year" award given by Loudwire. Billboard ranked the song at number 8 on their "Greatest of All Time Mainstream Rock Songs" list. Outsider is the sixth studio album by Canadian rock band Three Days Grace. It was released on March 9, 2018 through RCA Records. The album was produced by two of the band's prior producers, Gavin Brown and Howard Benson but also by members of the band themselves. It is the second album to feature Matt Walst as lead vocalist.