Thysanoteuthis is a genus of large squid comprising one well-known species, the diamond squid, and two dubious taxa.

The species listed above with an asterisk (*) are questionable and need further study to determine if they are valid species or synonyms. The question mark (?) indicates questionable placement within the genus.

Brachioteuthis is a genus of squid comprising five species.

Chtenopteryx is a genus of small, muscular, midwater squid in the monotypic family Chtenopterygidae. Four species are presently recognized in the genus, but more are believed to exist.

The family Cranchiidae comprises the approximately 60 species of glass squid, also known as cockatoo squid, cranchiid, cranch squid, or bathyscaphoid squid. Cranchiid squid occur in surface and midwater depths of open oceans around the world. They range in mantle length from 10 cm (3.9 in) to over 3 m (9.8 ft), in the case of the colossal squid. The common name, glass squid, derives from the transparent nature of most species. Cranchiid squid spend much of their lives in partially sunlit shallow waters, where their transparency provides camouflage. They are characterised by a swollen body and short arms, which bear two rows of suckers or hooks. The third arm pair is often enlarged. Many species are bioluminescent organisms and possess light organs on the undersides of their eyes, used to cancel their shadows. Eye morphology varies widely, ranging from large and circular to telescopic and stalked. A large, fluid-filled chamber containing ammonia solution is used to aid buoyancy. This buoyancy system is unique to the family and is the source of their common name "bathyscaphoid squid", after their resemblance to a bathyscaphe. Often the only organ that is visible through the transparent tissues is a cigar-shaped digestive gland, which is the cephalopod equivalent of a mammalian liver. This is usually held in a vertical position to reduce its silhouette and a light organ is sometimes present on the lower tip to further minimise its appearance in the water.

The Enoploteuthidea are a family of squid comprising approximately 40 species in four genera. Most species have a mantle length ranging from 3–13 cm. Hooks are present on all arms and tentacles. The family is best known for the large array of photophores throughout the body. 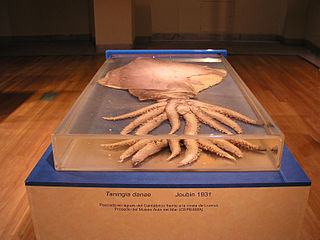 The Octopoteuthidae are a family of squid comprising two genera. The family is characterised by tentacles which cease to grow after the paralarval stage, and the use of a penis, instead of a hectocotylus.

The hooked squid, family Onychoteuthidae, currently comprise about 20–25 species, in six or seven genera. They range in mature mantle length from 7 cm to a suggested length of 2 m for the largest member, Onykia robusta. The family is characterised by the presence of hooks only on the tentacular clubs, a simple, straight, funnel–mantle locking apparatus, and a 'step' inside the jaw angle of the lower beak. With the exception of the Arctic Ocean, the family is found worldwide.

Psychroteuthis glacialis, the glacial squid, is the only known species in the monotypic genus Psychroteuthis, in the family Psychroteuthidae. While only one species has been confirmed, two undescribed species also probably exist. The species occurs in coastal waters near Antarctica and South America. It grows to a mantle length of 44 cm.

Pyroteuthidae is a family of squids. The family comprises two genera. Species are diurnally mesopelagic, migrating into surface waters during the night. The family is characterised by the tentacles, which have a permanent constriction and bend near the base; and photophores occurring on the tentacles, eyeballs, and viscera. Members reach mantle lengths of 23–50 mm. Paralarvae of the family are common around the Hawaiian Islands, with up to 17% of collected specimens in the area belonging to Pyroteuthidae. 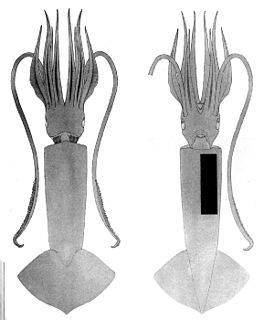 Taoniinae is a subfamily containing ten genera of glass squids.

Thysanoteuthis rhombus, also known as the diamond squid,diamondback squid, or rhomboid squid, is a large species of squid from the family Thysanoteuthidae which is found worldwide, throughout tropical and subtropical waters. T. rhombus is given its name for the appearance of the fins that run the length of the mantle. They are a fast growing species with a lifespan of approximately 1 year. The diamond squid is the only cephalopod species known to be monogamous. T. rhombus often preys on fish and other small cephalopods at varying water depths. This species is commercially fished in Japan, specifically in the Sea of Japan and Okinawa.

Onychoteuthis borealijaponica, the boreal clubhook squid, is a species of squid in the family Onychoteuthidae. It is the largest member of the genus Onychoteuthis, reaching a mantle length of 30 cm in males and 37 cm in females. Maturity is reached at 250 mm for males, and 300–350 mm in females. There are 24–27 hooks on each club, which is more than any other species in the genus Onychoteuthis. It is a pelagic species native to the North Pacific, although it migrates into Subarctic waters during the summer from its more southerly winter spawning grounds.

Onykia is a genus of squids in the family Onychoteuthidae. Due to similarities between the genera, several recent authors consider the genus Moroteuthis a junior synonym of Onykia. The type species is Onykia carriboea, the tropical clubhook squid.

Pyroteuthis is a genus of squid in the family Pyroteuthidae. It is differentiated from the genus Pterygioteuthis by size, head shape and behaviour. Species within the genus are separated by the arrangement of tentacular photophores; the shape of the hectocotylus, and the shape of the hectocotylus hooks. With the exception of the Tropical Eastern Pacific, the genus is circumpolar in tropical and temperate oceans. The species P. addolux is the only member to occur in the North Pacific. 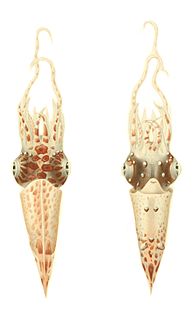 Pterygioteuthis is a genus of squid in the family Pyroteuthidae. Members are differentiated from the genus Pyroteuthis due to size and head shape. The genus is characterised by the presence of a lidded photophore over each eye.

Nototodarus is a genus of squid. Example species in this genus include Nototodarus sloanii, a species sought for human food; in the process of harvesting N. sloanii Australian sea lions are frequently killed, since that marine mammal preys upon this squid species. Furthermore, New Zealand arrow squid, N. sloanii, is an important food source for the endangered yellow-eyed penguin, Megadyptes antipodes. 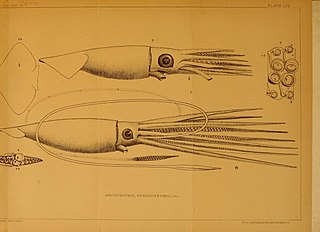 Sthenoteuthis is a genus of small squids, with two species, part of the subfamily Ommastrephinae within the family Ommastrephidae, the "flying squids". They are the dominant species of flying squid in the world's tropical and subtropical seas and they are commonly seen at the ocean's surface during the night. Their size ranges from mantle lengths of 100 mm to 600 mm.

Todarodes is a genus of flying squid from the subfamily Todarodinae, of which it is the type genus. The genus contains five species which are partially allopatric but between them their distributions encompass most of the world's oceans and seas. These squid have a funnel groove with foveola, a hectocotylised fourth arm and tentacular stalks which lack free trabeculae.