Thysanoteuthis rhombus, also known as the diamond squid,diamondback squid, or rhomboid squid, is a large species of squid from the family Thysanoteuthidae which is found worldwide, throughout tropical and subtropical waters. T. rhombus is given its name for the appearance of the fins that run the length of the mantle. They are a fast growing species with a lifespan of approximately 1 year. The diamond squid is the only cephalopod species known to be monogamous. T. rhombus often preys on fish and other small cephalopods at varying water depths. This species is commercially fished in Japan, specifically in the Sea of Japan and Okinawa. [3]

Thysanoteuthis rhombus are distinguishable by the presence of arms with two series of suckers, whereas the tentacular clubs have four. It lacks photophores. T. rhombus is named for its fins, which run in equal length along the mantle, giving the appearance of a rhombus. The species is able to grow up to 100 cm (3.3 ft) in mantle length [4] and a maximum weight of 30 kg, [5] although it averages around 20 kg. [6] T. rhombus is not an active swimmer and propels itself slowly using its triangular fins, although the species is able to make powerful contractions of its mantle to escape predation. [7]

T. rhombus has a relatively low population density, which has led to a unique situation among squids, namely monogamy, where male and female couples of the same size remain together from their juvenile stage until death. [9] The species feeds during the daytime at deep water levels and during the night at shallow water levels. [7] T. rhombus are often found in pairs, [8] but groups up to 20 have been recorded. [10]

T. rhombus typically inhabits open ocean waters of the subtropical and tropical locations with temperatures of >20 °C. [9] The diamond squid was found to be largely inactive or even die at depths of 0–100m due to sudden drops in temperatures below 15 °C. [11]

In subsurface water levels, T. rhombus juveniles were found to feed on crustaceans, small cephalopods and fishes. [12] As adults, the stomach contents of the Diamond squid were found to consist mostly of nonactive fishes at water depths of 400 to 650m. [13]

The pairing of males and females occurs at an immature stage where mantle length is less than 100mm and pairs remain monogamous. [15] Mating occurs in a head-to-head position, in which the male uses its hectocotylus to attach to the female's buccal membrane to transfer its spermatophores. Spawning is year round in tropical waters and lasts for 2–3 months, but in temperate regions spawning is more restricted to summer or early autumn periods and warmer currents. T. rhombus is known to be an intermittent spawner and is known to have multiple spawning in succession. [16] Females will produce secretions of gel-like substance from nidamental glands, similar to the Japanese flying squid, during spawning that will enter the water and swell. This swollen secretion will then be molded by the female into a cylinder. Female's oviductal glands will then begin to form two mucous threads, each with one row of eggs, which will fuse into a single cord containing a double row of eggs in the mantle cavity. The fused cord exits through into the water through the funnel where the eggs are met and fertilized with spermatozoa from seminal receptacles that were attached to the female's buccal membrane. The fertilized egg cord is then wound onto the cylinder. A female can produce 8 to 12 masses if properly utilizing its vitelline oocytes. [7]

"Taru-nagashi" is gear that consists of a vertical weighted long line with two or three artificial lures and with two or three rows of stainless steel hooks. At the other end of the line, an orange fluorescent buoy lays on its side on the surface until a squid hooks onto the line, which causes buoy stands up to alert the fisherman. The caught squid are pulled up by hand or by using a winch, so it is primarily used during the day. "Hata-nagashi" is gear that was adapted for the oceanographic conditions of Okinawa Prefecture. It has several artificial lures attached to a longer main line than those used in the Sea of Japan. The line is attached to several buoys and a flag at the surface. This gear lead to the increase of catches of T. rhombus. [17] 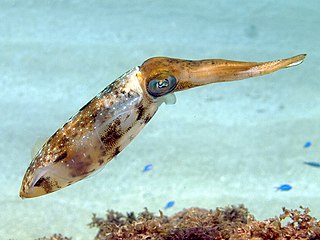 Squid are cephalopods in the superorder Decapodiformes with elongated bodies, large eyes, eight arms and two tentacles. Like all other cephalopods, squid have a distinct head, bilateral symmetry, and a mantle. They are mainly soft-bodied, like octopuses, but have a small internal skeleton in the form of a rod-like gladius or pen, made of chitin. 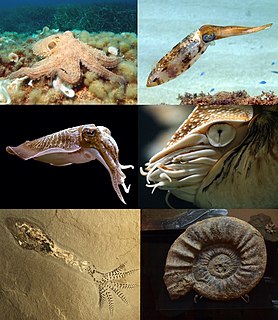 A cephalopod is any member of the molluscan class Cephalopoda such as a squid, octopus, cuttlefish, or nautilus. These exclusively marine animals are characterized by bilateral body symmetry, a prominent head, and a set of arms or tentacles modified from the рrimitive molluscan foot. Fishers sometimes call cephalopods "inkfish", referring to their common ability to squirt ink. The study of cephalopods is a branch of malacology known as teuthology.

The giant squid is a species of deep-ocean dwelling squid in the family Architeuthidae. It can grow to a tremendous size, offering an example of deep-sea gigantism: recent estimates put the maximum size at around 12–13 m (39–43 ft) for females and 10 m (33 ft) for males, from the posterior fins to the tip of the two long tentacles. The mantle of the giant squid is about 2 m long, and the length of the squid excluding its tentacles rarely exceeds 5 m (16 ft). Claims of specimens measuring 20 m (66 ft) or more have not been scientifically documented. 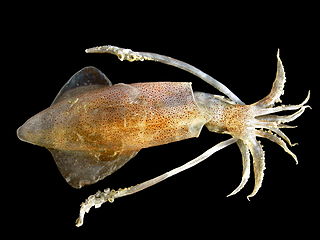 The European squid or common squid is a large squid belonging to the family Loliginidae. It occurs abundantly in coastal waters from the North Sea to at least the west coast of Africa. This species lives from sea level to depths of 500 m (1,600 ft). Its mantle is up to 40 cm (16 in) long. The species is extensively exploited by commercial fisheries.

The Japanese flying squid, Japanese common squid or Pacific flying squid, scientific name Todarodes pacificus, is a squid of the family Ommastrephidae. This animal lives in the northern Pacific Ocean, in the area surrounding Japan, along the entire coast of China up to Russia, then spreading across the Bering Strait east towards the southern coast of Alaska and Canada. They tend to cluster around the central region of Vietnam.

Loligo forbesii, known commonly as the veined squid and long-finned squid, is a commercially important species of squid in the family Loliginidae, the pencil squids.

The neon flying squid, sometimes called the red flying squid, akaika, and red squid is a species of large flying squid in the family Ommastrephidae. They are found in subtropical and temperate oceanic waters globally. 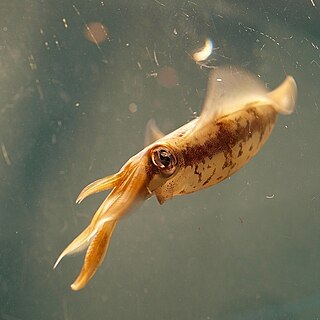 Sepioteuthis lessoniana, commonly known as the bigfin reef squid, glitter squid or oval squid, is a species of loliginid squid. It is one of the three currently recognized species belonging to the genus Sepioteuthis. Studies in 1993, however, have indicated that bigfin reef squids may comprise a cryptic species complex. The species is likely to include several very similar and closely related species.

Illex coindetii, commonly known as the southern shortfin squid or broadtail shortfin squid, is a species of neritic squids in the family Ommastrephidae. They are found in the Mediterranean Sea and on both sides of the north Atlantic Ocean.

Illex illecebrosus, commonly known as the northern shortfin squid, is a species of neritic squids in the family Ommastrephidae. They are found in the northwest Atlantic Ocean, from off the coast of eastern North America to Greenland, Iceland, and west of Ireland and the United Kingdom. They are a highly migratory and short-lived species, with lifespans of less than a year. They are commercially important and are fished extensively, mostly for the Canadian and Japanese markets. Northern shortfin squid is a migratory species of squid with a distribution ranging from Florida Straits to Newfoundland in the Northwest Atlantic Ocean. The species is native to Canada, Greenland, Iceland and United States. The species has an average lifespan between 1–1.5 years in which most live less than a year. The location of the fishery of the squid is mainly in Mid-Atlantic Bight from between summer and fall.

Sthenoteuthis pteropus, also known as the orangeback flying squid or orangeback squid, is a species of cephalopod in the family Ommastrephidae. It is native to tropical parts of the Atlantic Ocean where it is found to depths of about 200 m (656 ft).

Sepioteuthis australis, commonly known as the southern calamari or the southern reef squid, is a species of reef squid that is native to oceans off the coast of Australia and New Zealand. This species is caught commercially by trawling, as bycatch in the prawn fishing industry and by recreational anglers.

The purpleback flying squid or purpleback squid is a species of cephalopod in the family Ommastrephidae, occurring in the Indo-Pacific. It is considered one of the most abundant large squids.

Alloteuthis media, the midsize squid or little squid is a species of squid in the family Loliginidae from the eastern Atlantic and the Mediterranean Sea. It is generally a by catch species in trawl fisheries, although there is an active fishery in the western Mediterranean.

Ornithoteuthis antillarum, the Atlantic bird squid, is a species of flying squid from the family Ommastrephidae which is found in the warmer waters of the Atlantic Ocean. This species is an important component of the diet of many species of fish and of cetaceans. It is taken as a bycatch in fisheries but has the potential to be commercially important if appropriate fishing methods can be developed.

The Antarctic flying squid is a species of squid from the subfamily Todarodinae of the family Ommastrephidae, a family of pelagic squid from the order Oegopsida. It has a circumglobal distribution in the seas around the lower latitudes of the Southern Oceans.

The European flying squid is a species of squid from the continental slope and oceanic waters of the eastern Atlantic Ocean and the Mediterranean Sea. It is the type species of the genus Todarodes, the type genus of the subfamily Todarodinae of the pelagic squid family Ommastrephidae. It is a species which is targeted by some fisheries, although it is more often a bycatch. 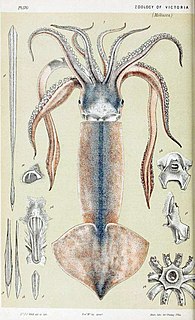 Nototodarus gouldi, also known as the Gould's squid, Gould's flying squid, or arrow squid, is a squid belonging to the family Ommastrephidae. It inhabits the tropical and temperate waters of Australia and New Zealand. It is frequently caught and eaten for food. They live up to one year.

Rossia is a genus of 10 species of benthic bobtail squid in the family Sepioidae found in all oceans. They live at depths greater than 50 m (164 ft) and can grow up to 9 cm in mantle length. This genus was first discovered in 1832 by Sir John Ross and his nephew James Clark Ross in the Arctic Seas, showing a resemblance to another genus under the same family, Sepiola. After returning from their expedition, Sir Richard Owen officially classified Rossia to be a new genus, naming it after Sir John and James Clark Ross.