Tieghemella heckelii (also called baku or cherry mahogany) is a tree species of the genus Tieghemella in the plant family Sapotaceae. The species occurs in Cameroon, Ivory Coast, Gabon, Ghana, Liberia, Nigeria, and Sierra Leone and is threatened by habitat loss and over exploitation. This timber tree species can grow up to 45 meters tall and 1.2 meters in diameter. One individual, the Big Tree of Oda, is 66.5 m (218 ft) tall and 396 cm (13 ft) in diameter and is believed to be the tallest tree in West Africa. [2] 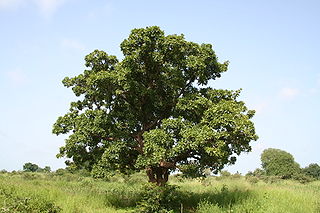 Vitellaria paradoxa, commonly known as shea tree, shi tree, or vitellaria, is a tree of the family Sapotaceae. It is the only species in the genus Vitellaria, and is indigenous to Africa. 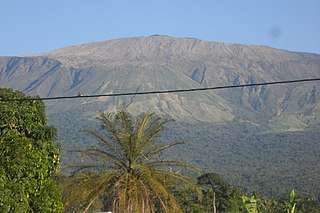 Abies procera, the noble fir, also called red fir and Christmas tree, is a western North American fir, native to the Cascade Range and Coast Range mountains of extreme northwest California and western Oregon and Washington in the United States. It is a high-altitude tree, typically occurring at 300–1,500 m (980–4,920 ft) altitude, only rarely reaching the tree line.

Juniperus excelsa, commonly called the Greek juniper, is a juniper found throughout the eastern Mediterranean, from northeastern Greece and southern Bulgaria across Turkey to Syria and Lebanon, Jordan and the Caucasus mountains.

Juniperus foetidissima, with common names foetid juniper or stinking juniper, is a juniper tree species in the family Cupressaceae.

Gilbertiodendron splendidum is a tall forest tree of lowland swamp forests of coastal West Africa in the family Fabaceae. It is found in Upper Guinean forests along coastal regions of Côte d'Ivoire, Ghana, and Sierra Leone. It is threatened by habitat loss. 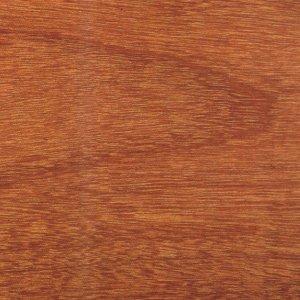 Khaya ivorensis, also called African mahogany or Lagos mahogany, is a tall forest tree with a buttressed trunk in the family Meliaceae. It is found in Angola, Cameroon, Côte d'Ivoire, Gabon, Ghana, Liberia, and Nigeria where it grows primarily in lowland tropical rainforests. It is threatened by habitat loss.

Pierreodendron kerstingii is a species of tree in the family Simaroubaceae. It is endemic to West Africa and found in Ivory Coast, Ghana, Togo, and Benin. It is sometimes considered synonym of Pierreodendron africanum, which would then be a widespread species distributed south to Angola and east to the Democratic Republic of the Congo. 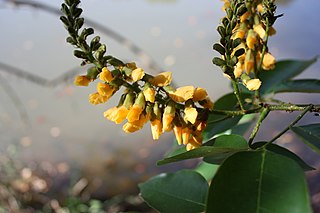 Pterocarpus santalinoides is a tree species in the legume family (biology) (Fabaceae); it is locally known as mututi.

Tieghemella is a genus of the plant family Sapotaceae described as a genus in 1890. The wood of Tieghemella species is known as makore in the lumber trade.

Protea nitida, commonly called wagon tree, waboom or blousuikerbos, is a large, slow-growing Protea endemic to South Africa. It is one of the few Protea species that grows into trees, and the only one that has usable timber.

Cordia platythyrsa is a species of flowering plant in the borage family, Boraginaceae, found in Africa and is native to Cameroon, Congo, Ivory Coast, Equatorial Guinea, Gabon, the Gambia, Ghana, Guinea, Guinea Bissau, Liberia, Nigeria, Senegal, Sierra Leone, Togo, and the Democratic Republic of the Congo. The tree grows to over 30 m in height and 1 m in diameter. The wood is pale yellow to almost white in color and used mainly for furniture making, interior joinery, domestic items, canoes, and musical instruments. It has low density (0.5 g/cm3) and is very soft, with a spongy, fibrous texture.

Hunteria umbellata grows as either a shrub or small tree up to 22 metres (72 ft) tall, with a trunk diameter of up to 40 centimetres (16 in). Its flowers feature a white, creamy or pale yellow corolla. The fruit is yellow and smooth. Its habitat is forests from sea level to 600 metres (2,000 ft) altitude. Its numerous local medicinal uses include for fever, leprosy sores, stomach and liver problems and as an anthelmintic, especially against internal worms. Hunteria umbellata has been used as arrow poison. The plant's hard wood is used in carving and to make small tools. The species is native to an area of tropical Africa from Guinea-Bissau in the west to Angola in the south.

Tabernaemontana pachysiphon grows as a shrub or small tree up to 15 metres (50 ft) tall, with a trunk diameter of up to 40 centimetres (16 in). Its fragrant flowers feature white to pale yellow corolla lobes. The fruit is green, almost spherical, up to 15 centimetres (6 in) in diameter. Its habitat is forests from sea level to 2,200 metres (7,200 ft) altitude. Its numerous local medicinal uses include as a styptic, and as a treatment for headache, hypertension and to relieve cramps. The species is native to tropical Africa.

According to Ghana’s Forestry officials, the big tree near the town of Akim Oda which is 66.5 m (218 ft) tall and 396 cm (13 ft) in diameter is believed to be the biggest tree ever discovered in Ghana and West Africa. It is a member of the species Tieghemella heckelii. It is located in the Esen Apam Forest Reserve, about 22 kilometers from Akim Oda, about 300 m (1,000 ft) off the Oda-Agona Swedru trunk road.