Last updated April 20, 2021
Species which have been categorized as very likely to become extinct in the near future
This article is about the conservation status as defined by the IUCN. For the concept in general, see endangered species.

Endangered species as classified by the International Union for Conservation of Nature (IUCN), are species which have been categorized as very likely to become extinct in the near future. On the IUCN Red List, endangered is the second most severe conservation status for wild populations in the IUCN's schema after Critically endangered  (CR). In 2012, the IUCN Red List featured 3,079 animal and 2,655 plant species as endangered (EN) worldwide. [1] The figures for 1998 were 1,102 and 1,197 respectively. [ citation needed ]

Though labelled a list, the IUCN Red List is a system of assessing the global conservation status of species that includes "Data Deficient" (DD) species – species for which more data and assessment is required before their situation may be determined – as well species comprehensively assessed by the IUCN's species assessment process. Those species of "Near Threatened" (NT) and "Least Concern" (LC) status have been assessed and found to have relatively robust and healthy populations, though these may be in decline. Unlike their more general use elsewhere, the List uses the terms "endangered species" and "threatened species" with particular meanings: "Endangered" (EN) species lie between "Vulnerable" (VU) and "Critically Endangered" (CR) species, while "Threatened" species are those species determined to be Vulnerable, Endangered or Critically Endangered.

Some examples of species classified as endangered by the IUCN are listed below:

A species is listed as endangered when it meets any of the following criteria from A to E. [3]

A) Reduction in population size based on any of the following:

B) Geographic range in the form of either B1 (extent of occurrence) OR B2 (area of occupancy) OR both:

C) Population estimated to number fewer than 2,500 mature individuals and either:

E) Quantitative analysis showing the probability of extinction in the wild is at least 20% within 20 years or five generations, whichever is the longer (up to a maximum of 100 years).

Acrantophis dumerili, commonly known as Dumeril's boa, is a non-venomous boa species found on Madagascar. No subspecies are currently recognized.

Acrantophis madagascariensis is a species of boid snake in the subfamily Sanziniinae that is endemic to the island of Madagascar. Its common names include Malagasy ground boa and Madagascar boa.

Montivipera albizona, the central Turkish mountain viper, is a venomous viper species endemic to the mountainous regions of central Turkey. No subspecies are currently recognized.

Macrovipera schweizeri is a species of venomous snake in the family Viperidae. The species is endemic to the Cyclades Archipelago in the Aegean sea. No subspecies are currently recognized.

Vipera kaznakovi is a species of venomous snake in the subfamily Viperinae of the family Viperidae. The species is endemic to Turkey, Georgia, and Russia. No subspecies are currently recognized.

Crotalus unicolor is a venomous pitviper species found only on the Caribbean island of Aruba, off the coast of Venezuela. Critically endangered, it is estimated that fewer than 230 adults survive in the wild. It is sometimes still classified as a subspecies of Crotalus durissus.

The Warner sucker is a rare species of freshwater ray-finned fish in the family Catostomidae. Native to Oregon in the United States and found only in the Warner Basin, its distribution extends just into Nevada and California. It is a federally listed threatened species. Its other common name is redhorse. The International Union for Conservation of Nature has rated this fish as an endangered species because of its small extent of occurrence, the small number of locations in which it is found, and the extreme fluctuations in area of occupancy resulting from drought and water abstraction. Conservation efforts have been put in place.

Bilbo's rain frog is an amphibian species in the family Brevicipitidae, endemic to South Africa. It was named after Bilbo Baggins, because the scientist who discovered it used to read The Hobbit to his children. Its natural habitats are temperate grassland and edges of wood plantations. The species, threatened by habitat loss, is listed as Near Threatened in the IUCN Red List of Threatened Species. 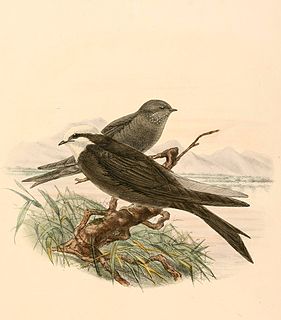 The white-headed saw-wing, also known as the white-headed rough-winged swallow is a species of bird in the family Hirundinidae. It is found in Angola, Burundi, Democratic Republic of the Congo, Ethiopia, Kenya, Malawi, Rwanda, South Sudan, Tanzania, Uganda, and Zambia. 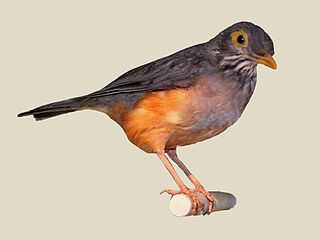 The bare-eyed thrush is a species of bird in the family Turdidae. It is found in Ethiopia, Kenya, Somalia, and Tanzania.

Bothrops pirajai is a species of venomous snake, a pit viper in the subfamily Crotalinae of the family Viperidae. The species is endemic to Brazil. There are no subspecies that are recognized as being valid.

Heterodon simus, commonly known as the southern hog-nosed snake, is a harmless snake species endemic to the southeastern United States. No subspecies are currently recognized.

Monachoides vicinus is a species of air-breathing land snail, a terrestrial pulmonate gastropod mollusk in the family Hygromiidae, the hairy snails and their allies. 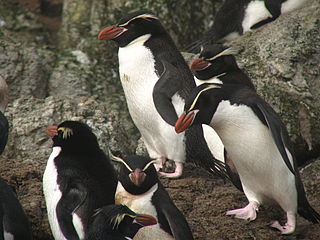 The Appalachia darter is a small species of freshwater ray-finned fish, a darter from the subfamily Etheostomatinae, part of the family Percidae, which also contains the perches, ruffes and pikeperches. It is found in the New River system above Kanawha Falls.

Podonephelium subaequilaterum is a tree species endemic to the sclerophyllous forests of New Caledonia. This species of trees suffers from forest reduction and fragmentation due to agriculture on the west coast of the country. The main threat to the species comes from habitat destruction due to the Javan rusa deer and uncontrolled forest fires. Its area of occupancy (AOO) is estimated to be 12 square kilometres (4.6 sq mi) and its extent of occurrence (EOO) is around 15 square kilometres (5.8 sq mi). The species is observed to be in a continuing decline of its quality of habitat, number of subpopulations, extent of occurrence, area of occupancy and the number of mature individuals.