A critically endangered (CR) species is one that has been categorized by the International Union for Conservation of Nature (IUCN) as facing an extremely high risk of extinction in the wild. [1]

As the IUCN Red List does not consider a species extinct until extensive, targeted surveys have been conducted, species that are possibly extinct are still listed as critically endangered. IUCN maintains a list [3] of "possibly extinct" CR(PE) and "possibly extinct in the wild" CR(PEW) species, modelled on categories used by BirdLife International to categorize these taxa.

To be defined as critically endangered in the Red List, a species must meet any of the following criteria (A–E) ("3G/10Y" signifies three generations or ten years—whichever is longer—over a maximum of 100 years; "MI" signifies Mature Individuals): [4]

1. Severe habitat fragmentation or existing at just one location

2. Decline in extent of occurrence, area of occupancy, area/extent/quality of habitat, number of locations/subpopulations, or amount of MI.

3. Extreme fluctuations in extent of occurrence, area of occupancy, number of locations/subpopulations, or amount of MI.

C: Declining population of less than 250 MI and either:

Local extinction or extirpation is the condition of a species that ceases to exist in the chosen geographic area of study, though it still exists elsewhere. Local extinctions are contrasted with global extinctions.

Boucardicus fortistriatus is a species of land snail with an operculum, a terrestrial gastropod mollusk in the family Cyclophoridae. 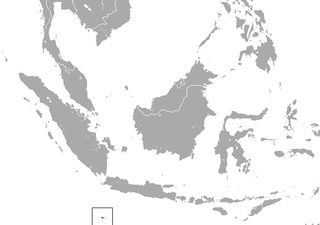 The Christmas Island shrew, also known as the Christmas Island musk-shrew is an extremely rare or possibly extinct shrew from Christmas Island. It was variously placed as subspecies of the Asian gray shrew or the Southeast Asian shrew, but morphological differences and the large distance between the species indicate that it is an entirely distinct species.

An endangered species is a species which has been categorized as very likely to become extinct in the near future. Endangered (EN), as categorized by the International Union for Conservation of Nature (IUCN) Red List, is the second most severe conservation status for wild populations in the IUCN's schema after Critically Endangered (CR). In 2012, the IUCN Red List featured 3,079 animal and 2,655 plant species as endangered (EN) worldwide. The figures for 1998 were 1,102 and 1,197 respectively. Many nations have laws that protect conservation-reliant species: for example, forbidding hunting, restricting land development or creating protected areas. Population numbers, trends and species' conservation status can be found at the lists of organisms by population.