The Tono River is the main river in Oecusse District, an exclave of East Timor. The river flows north, through the center of the district into the Sawu Sea, reaching the sea near Lifau. The area is the main rice producing place in Oecusse.

East Timor or Timor-Leste, officially the Democratic Republic of Timor-Leste, is a country in Maritime Southeast Asia. It comprises the eastern half of the island of Timor, the nearby islands of Atauro and Jaco, and Oecusse, an exclave on the northwestern side of the island surrounded by Indonesian West Timor. Australia is the country's southern neighbour, separated by the Timor Sea. The country's size is about 15,410 km2.

Lifau is a village and suco in the East Timor exclave of Oecusse District. The village is located west of the mouth of the Tono River. 1,938 people live in the suco.

In June 2017 the Noefefan Bridge was inaugurated over the Tono River. The 380-meter-long bridge connects Citrana, Passabe and other isolated regions west of the Tono River to the regional capital of Pante Macassar, providing them permanent access to markets, the ferry and airport, even on the rainy season (November to April). [1] 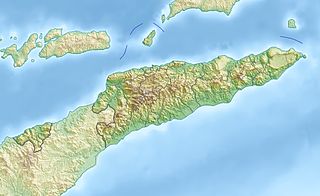 The Noefefan Bridge is a bridge over the Tono River, in Oecusse, East Timor. It was inaugurated on 10th June 2017 by the president of Timor-Leste, Francisco Guterres.

Citrana is a small town in the East Timor exclave of Oecusse District. It is located in the far west of the exclave, close to the mouth of the Noel Besi River, which forms part of the border with Indonesia.

Passabe is a small village (sulo) in Passabe Subdistrict,near the Indonesian border. It was the site of a massacre of East Timor by pro-Indonesia militias in the follow-up to the 1999 referendum for East Timor's independence.

In East Timor, as a direct consequence of the country's poverty, transportation infrastructure and communications networks are generally poor. The general condition of roads is poor, and telephone and Internet usage and capabilities are still limited, especially in the countryside. The country has six airports, one of which has commercial and international flights. There are no railroads.

The Hooghly River or the Bhāgirathi-Hooghly, traditionally called 'Ganga', and also called Kati-Ganga, is an approximately 260-kilometre-long (160 mi) distributary of the Ganges River in West Bengal, India. The Ganges splits into the Padma and the Hooghly near Giria, Murshidabad. Today there is a further man-made bifurcation of the river upstream at Farakka. The Padma flows eastward into Bangladesh, whereas the Hooghly flows south through West Bengal. The river flows through the Rarh region, the lower deltaic districts of West Bengal, and eventually into the Bay of Bengal. The upper riparian zone of the river is called Bhagirathi while the lower riparian zone is called Hooghly. Major rivers that drain into the Bhagirathi-Hooghly include Mayurakshi, Jalangi, Ajay, Damodar, Rupnarayan and Haldi rivers other than the Ganges. Calcutta and Hugli-Chinsura, the headquarter of Hooghly (district), is located on the banks of this river.

Burrard Inlet is a relatively shallow-sided coastal fjord in southwestern British Columbia, Canada. Formed during the last Ice Age, it separates the City of Vancouver and the rest of the low-lying Burrard Peninsula from the slopes of the North Shore Mountains, home to the communities of West Vancouver and the City and District of North Vancouver.

Kėdainiai District Municipality is one of 60 municipalities in Lithuania.

The Ambeno was a traditional kingship on the north coast of Timor, among the Atoni people. Its area is now in the Oecusse district of East Timor. The capital was in Nunheno until 1912, then in Tulaica.

Canning is a city of South 24 Parganas district in the Indian State of West Bengal. It is situated on the southern banks of the Matla River. Canning is the gateway of Sundarban. It is the headquarters of the Canning subdivision and also the seat for the district's Sub-Divisional Court.

Noel Besi River is a river flowing in the west part of Timor island and forms part of the border between the East Timor exclave of Oecussi and Indonesian West Timor. It flows north into the Sawu Sea. Located 1900 km east of the Indonesian capital, Jakarta.

Padiae is a small town in the East Timor exclave of Oecussi-Ambeno. It is located inland from Lifau, on the Tono River. The town of Pasar Tono lies just to the south.

Pasar Tono is a small town in the East Timor exclave of Oecussi-Ambeno. It is located inland from Lifau, on the Tono River. The town of Padiae lies just to the north. 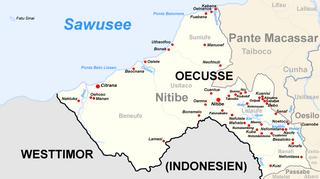 Nitibe is a small town in Nitibe subdistrict, in the East Timor exclave of Oecusse. It is located inland in the west of the exclave.

Oesilo is a small town in the East Timor exclave of Oecusse. It is located in the southeast of the exclave, close to the border with Indonesia.

Namirembe is a hill in Kampala, Uganda's capital and largest city. It is also a common name given to girls in several Baganda clans. Namirembe comes from the Luganda word “mirembe” meaning “peace”. Namirembe loosely translates into "Full of Peace". Legend has it that this hill was a gathering place for celebrating peace or war victories.

Matla River forms a wide estuary in and around the Sundarbans in South 24 Parganas district in the Indian state of West Bengal.

The Adyar or Adayar, originating near the Chembarambakkam Lake in Kanchipuram district, is one of the three rivers which winds through Chennai (Madras), Tamil Nadu, India, and joins the Bay of Bengal at the Adyar Estuary. The 42.5-kilometre (26.4 mi) long river contributes to the estuarine ecosystem of Chennai. Despite the high pollution levels, boating and fishing take place in this river. The river collects surplus water from about 200 tanks and lakes, small streams and the rainwater drains in the city, with a combined catchment area of 860 square kilometres (331 sq mi). Most of the waste from the city is drained into this river and the Cooum.

Agouza is a small suburb of Giza district, in Giza Governorate, on the western bank of the Nile River. It is situated between 6th October Bridge and 15th May Bridge and is north of Dokki and south of Mohandesin suburbs. Because the British Council is situated there, many expats choose to live in its leafy and fairly quiet streets. Frequenters of the infamous Cairo Jazz Club, a fixture in Cairo's exceptional nightlife, the area is also seen as highly affluent.

Passabe is an administrative post of the Oecusse District of East Timor, which is an enclave surrounded by Indonesian West Timor. In the 2004 census it had a population of 7,531 people in 1,153 households. Passabe is a small village (sulo) in the administrative post, very near the Indonesian border. It was the site of a massacre of East Timorese by pro-Indonesia militias in the follow-up to the 1999 referendum for East Timor's independence.