Tony Bancroft (born July 31, 1967) is an American animator and film director who frequently collaborates with Disney. He is founder and owner of the faith-driven animation company Toonacious Family Entertainment. Tony currently serves as the Executive VP Creative Development and Production for DivideNine Animation Studios.

A native Californian, Bancroft grew up in Orange County. After a two-year stint at Cypress College, he enrolled in the character animation program at CalArts. This led to a summer job as a production assistant with filmmaker Ralph Bakshi and ultimately to an internship in California with Disney Feature Animation followed by a full-time position at the new Florida animation facility. Bancroft (along with his twin brother Tom) was selected to be among the first group of animators to work at the Disney-MGM Studios. During his one-year stay in Florida, he had his first official assignment as an assistant clean-up animator on Roger Rabbit in Roller Coaster Rabbit (1990). This was followed by a credit as animating assistant on The Rescuers Down Under (1990) working on the character of "Frank the frill-necked lizard".

In 1990, he returned to California and worked as a character animator on Beauty and the Beast (1991) and Aladdin (1992) before being promoted to supervising animator role on The Lion King (1994). After working on the character design and some preliminary animation for the gargoyle characters in The Hunchback of Notre Dame (1996), he was tapped to join Barry Cook as a director on Mulan (1998). [1]

He was animation supervisor on Stuart Little 2 at Sony Pictures Imageworks during 2002, and founded Toonacious that same year. Bancroft also served as English voice director on Hayao Miyazaki's Porco Rosso in 2003.

In 2014, Bancroft and his brother Tom, began The Bancroft Brothers Animation Podcast, which focuses on the animation industry, featuring interviews with creators and those involved. [4] The podcast celebrated its 100th episode with guest Mark Henn in July 2018 live show presented via Skype, for animation classes at Azusa Pacific University in California and Lipscomb University in Tennessee, where each brother teaches. [5] [6]

For some time, Bancroft was working on pre-production and directing an animated film, titled Bunyan and Babe , which was released in 2017. [7]

In March of 2018, it was announced the Bancroft would join Azusa Pacific University as the head of the school's new Animation and Visual Effects degree program beginning in the fall of that year. [8] [9] [10]

Bancroft and his wife, Rene, have three daughters, Caitlin, Savannah, and Sierra. They returned to Los Angeles after living in Florida during the production of Mulan. He has a twin brother named Tom who is also an animator. [12]

He is a Christian, and he highly credits God for his talents as an animator and director. [13]

Mulan is a fictional character, inspired by a legendary figure, who appears in Walt Disney Pictures' 36th animated feature film Mulan (1998), as well as its sequel Mulan II (2004). Her speaking voice is provided by actress Ming-Na Wen, while singer Lea Salonga provides the character's singing voice. Created by author Robert D. San Souci, Mulan is based on the legendary Chinese warrior Hua Mulan from the poem the Ballad of Mulan. The only child of an aging war veteran, Mulan disregards both tradition and the law by disguising herself as a man in order to enlist herself in the army in lieu of her feeble father.

Mulan is a 1998 American animated musical adventure film produced by Walt Disney Feature Animation for Walt Disney Pictures. It is based on the Chinese legend of Hua Mulan, and was Disney's 36th animated feature and the ninth animated film produced and released during the Disney Renaissance. It was directed by Tony Bancroft and Barry Cook, with story by Robert D. San Souci and screenplay by Rita Hsiao, Philip LaZebnik, Chris Sanders, Eugenia Bostwick-Singer, and Raymond Singer. Ming-Na Wen, Eddie Murphy, Miguel Ferrer and BD Wong star in the English version, while Jackie Chan provided the voice of Captain Li Shang for the Chinese dubs of the film. The film's plot takes place in China during the Han dynasty, where Fa Mulan, daughter of aged warrior Fa Zhou, impersonates a man to take her father's place during a general conscription to counter a Hun invasion.

Ward Walrath Kimball was an American animator employed by Walt Disney Animation Studios. He was one of Walt Disney's main team of animators, known collectively as Disney's Nine Old Men. His films have been honored with two Academy Awards for Best Animated Short Film. 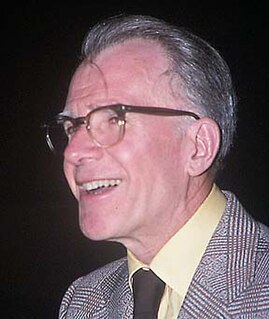 Franklin Rosborough "Frank" Thomas was an American animator and pianist. He was one of Walt Disney's leading team of animators known as the Nine Old Men.

Marc Fraser Davis was a prominent American artist and animator for Walt Disney Animation Studios. He was one of Disney's Nine Old Men, the famed core animators of Disney animated films, and was revered for his knowledge and understanding of visual aesthetics. After his work on One Hundred and One Dalmatians he moved to Walt Disney Imagineering to work on rides for Disneyland and Walt Disney World before retiring in 1978. 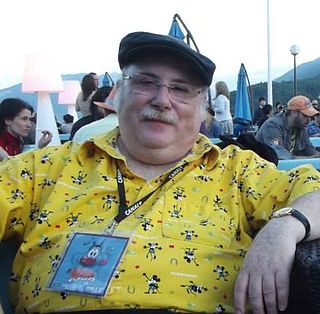 Eric Goldberg is an American animator, voice actor and film director known for his work at both Walt Disney Animation Studios and Warner Bros. Animation.

Ash Brannon is an American animator, writer, and director. He was a story artist and directing animator on Toy Story and co-director on Toy Story 2. Besides working at Pixar he has also worked with DreamWorks Animation on Over the Hedge and Sony Pictures Animation on Surf's Up. He also directed and wrote the 2016 computer-animated film Rock Dog.

Daniel A. Haskett is an American veteran animator who, according to Variety, was one of a "group of young animators trained by Disney's 'Nine Old Men' that were confined to one small room in the Disney Feature Animation Building in the 1970s."

Ruben Azama Aquino is a Japanese-born Filipino-American character animator and a supervising animator who formerly worked at Walt Disney Animation Studios. His work has included several Disney characters, including Ursula in The Little Mermaid, Maurice in Beauty and the Beast, Simba as an adult in The Lion King, Chief Powhatan in Pocahontas, Li Shang in Mulan, Denahi in Brother Bear and Eudora and James in The Princess and the Frog. In March 2013, it was announced that Aquino had been laid off, as well as 8 other animators who worked at the studio, including Nik Ranieri. 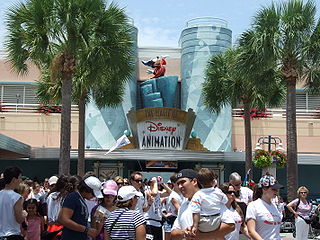 The Magic of Disney Animation was a show and tour at Disney's Hollywood Studios, Florida. A Disney animator would show guests how the characters in Disney animated films were chosen and designed. The attraction closed permanently on July 12, 2015. In December 2015, the building began to be used to house the Star Wars Launch Bay.

Bunyan and Babe is a 2017 American computer-animated film directed by Louis Ross, featuring the voices of John Goodman as Paul Bunyan and Jeff Foxworthy as Babe the Blue Ox. The film premiered online on Google Play, where it has been made available to watch for free between January 12, 2017 and February 16, 2017. It was theatrically released in 12 American markets on February 3, 2017.

Nik Ranieri is a character animator who is primarily known for his work at Walt Disney Animation Studios. He has been supervising animator of many characters, and remained so until his layoff in 2013.

Dale L. Baer was an American character animator for Walt Disney Animation Studios and The Baer Animation Company. He was supervising animator of many characters. 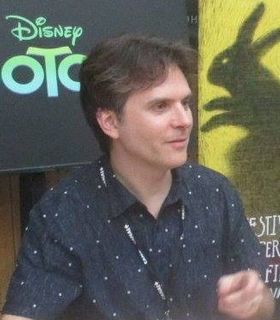 Mark Henn is a Disney supervising animator, whose contributions to animation have included several Disney leading or title characters, most notably heroines. His work includes Ariel in The Little Mermaid, Belle in Beauty and the Beast, Princess Jasmine in Aladdin, Young Simba in The Lion King and the title character in Mulan. He has also been animator of such films as 2007's Enchanted and the Goofy short How to Hook Up Your Home Theater. Additionally he directed the award-winning short film John Henry. Recently, he was the supervising animator of Princess Tiana in The Princess and the Frog.

Hamilton Somers Luske was an American animator and film director. He joined the Walt Disney Productions animation studio in 1931 and he was soon trusted enough by Walt Disney to be made supervising animator of Snow White in Snow White and the Seven Dwarfs. 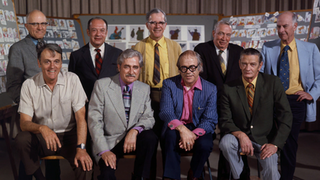 Disney's Nine Old Men were Walt Disney Productions' core animators, some of whom later became directors, who created some of Disney's most famous animated cartoons, from Snow White and the Seven Dwarfs onward to The Rescuers, and were referred to as such by Walt Disney himself. They worked in both short films and feature films. Disney delegated more and more tasks to them in the animation department in the early 1950s when their interests expanded and diversified their scope. Eric Larson was the last to retire from Disney, after his role as animation consultant on The Great Mouse Detective in 1986. All members of the group are now deceased, and are acknowledged as Disney Legends.

Barry Cook is an American film director who has worked in the animated film industry since the 1980s. Cook and Tony Bancroft directed Mulan (1998), for which they won the 1998 Annie Award for Best Animated Feature. Cook was also the co-director for Arthur Christmas (2011), directed by Sarah Smith. Cook also directed Walking with Dinosaurs (2013) with Neil Nightingale.

Michael Arthur Peraza Jr. is a Cuban-American animator, art director, conceptual artist and historian of animation, who has worked for The Walt Disney Company, Fox Features, and Warner Brothers. As a Disney Master Artist, he speaks at special events as a panelist with his wife and fellow Disney Master Artist, Patty Peraza, about experiences in the entertainment field. He received the Friz Freleng Lifetime Achievement Award from the International Family Film Festival in 2014, and the Disneyana Fan Club Legend Award in 2018. Currently, he continues his work with Warner Brothers and Disney Television Animation.