Too Many Winners is a 1947 American crime film directed by William Beaudine and starring Hugh Beaumont, Trudy Marshall and Ralph Dunn. [1]

Private detective Michael Shayne is puzzled when newspaper publisher Gil Madden offers him money to not take a case, whereupon Mayme Martin tries to hire him. He goes to see Mayme, exasperating secretary-girlfriend Phyllis Hamilton, who was counting on a vacation with Shayne and promptly quits.

After learning from Mayme that something's amiss at Santa Rosita racetrack, Shayne is ambushed and beaten by a pair of thugs. Newspaper reporter Tim Rourke is sent by Shayne to see Mayme and finds her dead.

Shayne learns of a counterfeit-ticket racket that is costing the racetrack a lot of money. He speaks with track manager John Hardeman and encounters Ben Edwards, a printer who does the track's tickets. Edwards turns out to be an escaped convict from Joliet whose fellow former inmate Theodore Ross is now a fugitive as well.

Hardeman is shot, as is Edwards. In the end, Shayne proves to Detective Pete Rafferty that it was Ross, now going by the alias Madden, who was behind the scheme. Phyllis forgives the private eye and begins planning their vacation.

Dressed to Kill is a 1941 crime mystery starring Lloyd Nolan, Mary Beth Hughes and Sheila Ryan. The film was based on The Dead Take No Bows, a mystery novel by Richard Burke.

Four Star Playhouse is an American television anthology series that ran from 1952 to 1956. Four Star Playhouse was owned by Four Star International. Its episodes ranged anywhere from surreal mysteries, such as "The Man on the Train", to light comedies, such as "The Lost Silk Hat". The original premise was that Charles Boyer, Ida Lupino, David Niven, and Dick Powell would take turns starring in episodes. However, several other performers took the lead from time to time, including Ronald Colman and Joan Fontaine.

Michael "Mike" Shayne is a fictional private detective character created during the late 1930s by writer Brett Halliday, a pseudonym of Davis Dresser. The character appeared in a series of seven films starring Lloyd Nolan for Twentieth Century Fox, five films from the low-budget Producers Releasing Corporation with Hugh Beaumont, a radio series under a variety of titles between 1944 and 1953, and later in 1960–1961 in a 32-episode NBC television series starring Richard Denning in the title role.

The Biz is a BBC children's television drama series about a group of teenagers at a fictional stage school. The series was written by Chris Ellis, Jeremy Front, Matthew Graham and Sarah-Louise Hawkins. The directors were David Andrews, Nigel Douglas and John Smith. Wayne Fowkes was the choreographer and original music was composed by Michael Omer. It ran for three series from 1994 to 1996.

Michael Shayne, Private Detective is a 1940 American mystery film directed by Eugene Forde and starring Lloyd Nolan, Marjorie Weaver and Joan Valerie. It is based on Brett Halliday's novel The Private Practice of Michael Shayne. It was the first in a series of Michael Shayne films starring Nolan. 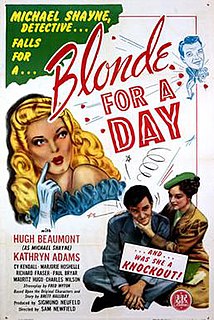 Murder Is My Business is a 1946 American action film directed by Sam Newfield and written by Fred Myton. It is based on the 1940 novel The Uncomplaining Corpses by Brett Halliday. The film stars Hugh Beaumont, Cheryl Walker, Lyle Talbot, George Meeker, Pierre Watkin and Richard Keene. The film was released on March 7, 1946, by Producers Releasing Corporation. 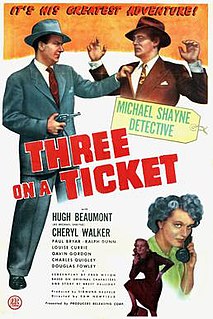 Three on a Ticket is a 1947 American crime film directed by Sam Newfield and written by Fred Myton. It is based on the 1942 novel The Corpse Came Calling by Brett Halliday. The film stars Hugh Beaumont, Cheryl Walker, Paul Bryar, Ralph Dunn, Louise Currie, Gavin Gordon, Charles Quigley and Douglas Fowley. The film was released on April 4, 1947, by Producers Releasing Corporation.

The 1984 Queen's Birthday Honours in New Zealand, celebrating the official birthday of Elizabeth II, were appointments made by the Queen in her right as Queen of New Zealand, on the advice of the New Zealand government, to various orders and honours to reward and highlight good works by New Zealanders. They were announced on 16 June 1984.