Top Glove Corporation Berhad is a Malaysian rubber glove manufacturer who also specialises in face masks, condoms, dental dams, and other products. [1] The company owns and operates 47 manufacturing facilities in Malaysia, Thailand, China, and Vietnam. It also has marketing offices in these countries (except Vietnam) as well as the United States, Germany, and Brazil. [2]

The company was founded in Malaysia in 1991 by Tan Sri Dr Lim Wee Chai, with one production line and staff comprising 100 people. Wee Chai's parents are rubber plantation owners and traders. Top Glove has since become the world's largest manufacturer of gloves, commanding 26% of the world market share. [3] [4]

Top Glove was listed on the Kuala Lumpur Stock Exchange (now) Bursa Malaysia) in August 2001. [5] In the span of a year, Top Glove Corporation Bhd's listing was promoted from the Second Board to the Main Board on May 16, 2002. [6] [7]

In April 2020, the company announced that it would manufacture face masks due to the COVID-19 pandemic. [14] Due to rising demand for protective gear in response to COVID-19, Top Glove's profits had risen by 400% by mid-December 2020, with the company announcing a 20-times increase in quarterly net profit to RM 2.4 billion (US$590 million) [15]

In November 2020, the company donated a total of RM185 million to the government's COVID-19 fund set up to battle the pandemic. [16] At the same time, a COVID-19 cluster was emerging in from its plant in Meru which resulted to temporary closing of 28 factories by stages in that area. [17]

In December 2018, The Guardian reported that migrant workers were being allegedly subjected to forced labour, forced overtime, debt bondage, withheld wages and passport confiscation. [18] The company has denied these allegations and claimed that it has since improved its labour initiatives, which include the introduction of a zero cost recruitment policy. [19]

An investigation by Channel 4 News in June 2020 found that staff were living in cramped conditions, paid £1.08 an hour, forced to work overtime to meet the demand for gloves during the COVID-19 pandemic, and could not adequately practice social distancing despite the company claiming appropriate measures were taken. [20] Workers, many of whom were migrants, also claimed they paid up to $5000 in recruitment fees to secure employment, leaving them in debt bondage. [21] Top Glove did not address any specific claims but called the investigation inaccurate. [22]

US Customs product sanction and detention

On 15 July 2020, the U.S. Customs and Border Protection (CBP) placed a detention order on imports of products made by subsidiaries of Top Glove for labour issues over debt bondage of its foreign workers and poor housing. [23] [24] In response, Top Glove pledged to improve housing for their workers and remove the debt bondage of its workers in an effort to lift the ban. [25] [26]

In mid-November 2020, several COVID-19 cases were detected in one of the Top Glove dormitories in Klang which has led to an enhanced movement control order being implemented in the surrounding area. [27] By 27 November 2020, more than 4000 cases were linked to the Top Glove dormitory cluster. [28] On 30 November, the EMCO at Top Glove's dormitories across Malaysia was extended until 14 December. [29] This forced the company to temporarily close a total of 28 factories in stages in the area. [30]

According to a Malay Mail report published on 13 December 2020, several South Asian migrant workers had told the Agence France-Press about "appalling" living conditions including cramped dormitories housing 25 people. These overcrowded conditions had contributed to the spread of COVID-19 within 28 of Top Glove's 41 factories. Malaysian authorities are planning legal action against the company for poor worker accommodation, which could result in heavy fines. In response to criticism and publicity, Top Glove announced plans to purchase more workers' accommodation and to build "mega-hostels" equipped with modern amenities that can house 7,300 people. [15] The same day, it was reported that Top Glove had fired a whistleblowing Nepalese migrant worker named Yubaraj Khadka for sharing photos of overcrowded working conditions, which were later picked up by Reuters. [31]

On 23 December 2020, Top Glove announced that it would no longer penalise whistleblowers and would establish three helplines for workers’ complaints. [32]

Bursa Malaysia is the stock exchange of Malaysia. It is in Kuala Lumpur; it was previously the Kuala Lumpur Stock Exchange.

Prasarana Malaysia Berhad (Prasarana) is a 100% government-owned company which was set up by Ministry of Finance (Malaysia) as a corporate body established under the Minister of Finance (Incorporation) Act 1957 to own the assets of multi-modal public transport operator in Malaysia, under the government's move to restructure the city's public transport system. It is one of the largest public-transport companies in Malaysia other than Konsortium Transnasional Berhad. As a government-owned company since 1998, it operates stage bus and light metro services via several wholly owned subsidiaries.

Immigration to Singapore is historically the main impetus for population growth in the country since the founding of modern Singapore in the early 19th century. Immigration and immigrant workers in Singapore have been closely associated with Singapore's economic development. For a long period after its founding, the majority of Singapore's population were immigrants. It was not until around the 1930s that the number of native births in Singapore would overtake net immigration. After its separation from Malaysia in 1965, immigration laws were modified in 1966 to reinforce Singapore's identity as a sovereign state. However, the initial strict controls on immigrant workers were relaxed as demand for labour grew with increased industrialisation. Immigration would again become the largest contributor to population increase in Singapore in the late 20th century and early 21st century.

Tan Sri Dr Lim Wee Chai is a Malaysian businessman. He is the Executive Chairman and Founder of Top Glove Corporation Bhd, a rubber glove making company, which was founded in 1991 and is listed on Bursa Malaysia and the main board of the Singapore Exchange (SGX). Lim was listed by Forbes as Malaysia's 14th richest person in 2020.

Merdeka 118, also known as PNB 118, is a 118-storey, 644-metre (2,113-foot) megatall skyscraper currently under construction in Kuala Lumpur, Malaysia. It is the tallest under construction building as of January 2021. Upon completion, the structure will become the tallest building in Malaysia and Southeast Asia, and the second-tallest building in the world.

Free Malaysia Today (FMT) is an independent, bilingual news online portal with content, in both English and Bahasa Malaysia (Malay), with a focus on Malaysian current affairs, published since 2009. It is one of Malaysia's most accessed news sites with monthly visits of 11.83 million. 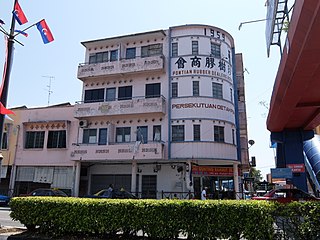 As of 2017, Malaysia is the fifth largest producer and exporter of natural rubber (NR). They are the leader in the production and export of rubber products. They are also the largest consumer of natural rubber. World's largest and leading rubber gloves producer. Annually rubber gloves export worth US$ 7.3 billion in 2020.COVID-19 pandemic postie impact for rubber industry most countries import tons of rubber gloves. Rubber industry annually growth 12% than previous year. But top gloves factories said, new outbreak at its facilities on 25th November 2020.

Kossan Rubber Industries is a Kuala Lumpur based public limited company engaged in manufacture, sale, and export of rubber products. It was founded by Dato’ Lim Kuang Sia in 1979. 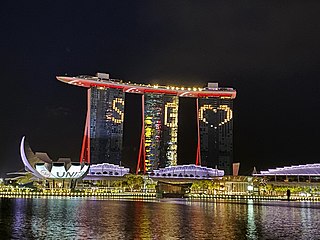 The COVID-19 pandemic in Singapore is part of the worldwide pandemic of coronavirus disease 2019 caused by severe acute respiratory syndrome coronavirus 2. The first case in Singapore was confirmed on 23 January 2020. Early cases were primarily imported until local transmission began to develop in February and March. By late-March and April, COVID-19 clusters were detected at multiple sleeping quarters, for which soon contributed to an overwhelming proportion of new cases in the country.

The COVID-19 pandemic in Malaysia is part of the ongoing worldwide pandemic of coronavirus disease 2019 caused by severe acute respiratory syndrome coronavirus 2. The medical response to the outbreak in Malaysia is overseen by Director-General of Health Noor Hisham Abdullah under the Health Ministry of two successive governments. Preparations to stockpile equipment, detect and monitor cases, and treat COVID-19 patients were reported to have been initiated as early as 6 January 2020, following a World Health Organization (WHO) report on a late-December 2019 outbreak of "pneumonia of unknown cause" in the city of Wuhan in Hubei, China. 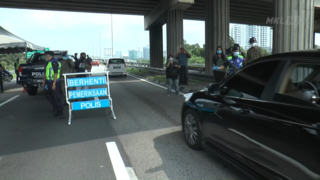 The Malaysian Government Movement Control Order, commonly referred to as the MCO or PKP, is a cordon sanitaire implemented as a preventive measure by the federal government of Malaysia in response to the COVID-19 pandemic in the country on 18 March 2020. The order was commonly referred to in local and international media as a "lockdown" or "partial lockdown."

The following is a timeline of the COVID-19 pandemic in Singapore.

This article documents the chronology of the response to the COVID-19 pandemic in December 2020, which originated in Wuhan, China in December 2019. Some developments may become known or fully understood only in retrospect. Reporting on this pandemic began in December 2019.

A Tablighi Jamaat religious conference that took place at the "Masjid Jamek Sri Petaling" in Kuala Lumpur's Sri Petaling district between 27 February to 1 March 2020 became a COVID-19 super-spreader event with more than 620 cases being linked to the event. By 19 May, the Malaysian Director-General of Health Noor Hisham Abdullah confirmed that 48% of the country's COVID-19 cases (3,347) had been linked to the Kuala Lumpur Tablighi Jamaat cluster. Additionally, nearly 10% of attendees were overseas visitors, causing COVID-19 to spread to other countries in Southeast Asia.

This article documents the chronology of the response to the COVID-19 pandemic in November 2020, which originated in Wuhan, China in December 2019. Some developments may become known or fully understood only in retrospect. Reporting on this pandemic began in December 2019.