The COVID-19 pandemic in Kuala Lumpur started when a Chinese male national from Wuhan in the province of Hubei tested positive on 3 February 2020. As of 10 July, Kuala Lumpur confirmed 2,445 cases and 18 fatalities. [1]

On 3 February, Kuala Lumpur recorded its first case of infection: a 63-year-old Chinese male national. He arrived in Kuala Lumpur International Airport (KLIA) from Xiamen of Fujian Province on 18 January with his family. He developed mild fever on 23 January, and was admitted to Kuala Lumpur Hospital (HKL). He was tested positive on 3 February. He wasn't given any antiviral drugs for treatment.

On 5 February, another case was recorded: a 37-year-old Chinese female national. She arrived in Kuala Lumpur International Airport with her mother and three friends on 25 January, and toured around the city. On 1 February, she sought treatment at HKL after having slight fever. The doctor allowed her to go home to rest after prescribing the medicine, but order her and her group to stay indoors and isolate. Health officials continued to monitor the woman and found that her condition persisted until 5 February, where she was referred to HKL and diagnosed at the same day. [4]

Malaysiakini is an online news portal published in Malay, English, Chinese and Tamil. Malaysiakini receives over 2.3 million page-views per day on desktop and mobile. Alexa ranked malaysiakini.com as the 13th most popular web site in Malaysia in 2015.

Tan Sri Dato' (Dr.) Haji Mahiaddin bin Md Yasin, familiarly known as Muhyiddin bin Mohd. Yassin, is a Malaysian politician who served as the 8th Prime Minister of Malaysia from March 2020 to August 2021. He is the shortest-serving Prime Minister in Malaysian history by serving for only 17 months. He previously served as the 10th Deputy Prime Minister, Minister of Home Affairs and in many other Cabinet positions under former Prime Ministers Abdullah Ahmad Badawi, Najib Razak and Mahathir Mohamad, from May 1995 to February 2020. During the 2020–21 Malaysian political crisis, Mahathir's resignation on 24 February 2020 led to Muhyiddin being declared Prime Minister by the Yang di-Pertuan Agong. He was formally appointed and sworn in on 1 March 2020, and shortly afterwards directed Malaysia's response to the COVID-19 pandemic. Muhyiddin resigned on 16 August 2021 after losing majority support over his government's pandemic response.

The 2009 flu outbreak in Malaysia is part of a larger flu pandemic involving a new type of influenza A virus subtype H1N1 virus. As of 11 August 2009, the country has over 2,253 cases, beginning with "imported" cases from affected countries, including the United States and Australia from 15 May 2009 onwards, and the first identified local transmission on 17 June 2009. From 12 August, the Malaysian Health Ministry said that it had discontinue officially updating the total number of H1N1 cases within Malaysia in line with guidelines issued by the World Health Organization. As of 21 August 2009 the unofficial number of cases reported in the media is 5,876 so far. The first death related to the A(H1N1) virus was reported on 23 July 2009 and so far there have been 78 deaths reported. On 6 July 2009 Malaysia announced that it was shifting from containment to mitigation to tackle the spread of the virus. The federal government has declared a national health emergency in Malaysia because of the A(H1N1) outbreak and is considering imposing a health curfew similar to the week-long shutdown of non-essential services and industries in Mexico.

The COVID-19 pandemic in Malaysia is part of the ongoing worldwide pandemic of coronavirus disease 2019 caused by severe acute respiratory syndrome coronavirus 2. The medical response and preparedness to the outbreak in Malaysia are overseen by Director-General of Health Noor Hisham Abdullah under the Health Ministry of three successive governments. As of 19 September 2021, with over 2,000,000 confirmed COVID-19 cases, over 210,000 active cases, and over 23,400 deaths, the country is currently ranked third in the number of cases and deaths due to COVID-19 in Southeast Asia, behind Indonesia and the Philippines. 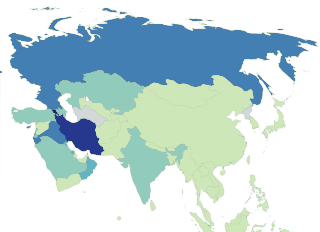 The COVID-19 pandemic began in Asia in Wuhan, Hubei, China, and has spread widely through the continent. As of 19 September 2021, at least one case of COVID-19 had been reported in every country in Asia except North Korea and Turkmenistan. 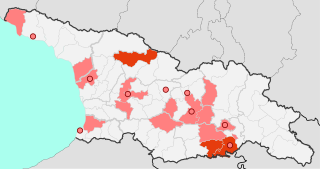 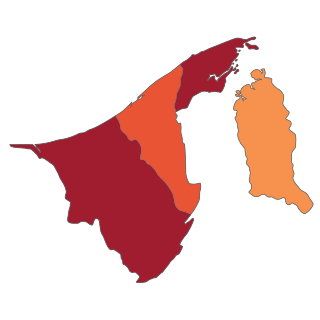 The COVID-19 pandemic in Cambodia is part of the ongoing worldwide pandemic of coronavirus disease 2019 caused by severe acute respiratory syndrome coronavirus 2. The first imported case in Cambodia was detected in Sihanoukville on 27 January 2020. Although a number of imported cases and transmission to direct contacts were confirmed throughout 2020, no community transmission was detected until 29 November 2020. As of July 2021, Phnom Penh has been the most affected province with the majority of infections and deaths. Banteay Meanchey has the second-highest number of infections, whereas Kandal has second-highest number of deaths. 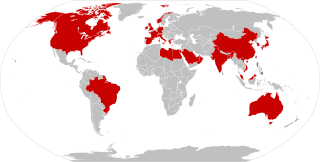 Overseas Filipinos, including Filipino migrant workers outside the Philippines, have been affected by the COVID-19 pandemic. As of June 1, 2021, there have been 19,765 confirmed COVID-19 cases of Filipino citizens residing outside the Philippines with 12,037 recoveries and 1,194 deaths. The official count from the Department of Foreign Affairs (DFA) on the cases of overseas Filipinos is not included in the national tally of the Philippine government. Repatriates on the other hand are included in the national tally of the Department of Health (DOH) but are listed separately from regional counts.

The COVID-19 pandemic in Johor, Malaysia started on 25 January 2020 when three Chinese tourists from Wuhan, the source of the outbreak, was tested positive in Iskandar Puteri. As of 26 December, Johor confirmed 4,438 cases and 32 deaths.

The COVID-19 pandemic in Southeast Asia is part of the ongoing worldwide pandemic of coronavirus disease 2019 caused by severe acute respiratory syndrome coronavirus 2. It was confirmed to have spread to Southeast Asia on 13 January 2020, when a 61-year-old woman from Wuhan tested positive in Thailand, making it the first country other than China to report a case. The first death occurred on 2 February, involving a 44-year-old Chinese man in the Philippines, also the first outside China. By 24 March, all states in the region had announced at least one case.

A Tablighi Jamaat religious conference that took place at the "Masjid Jamek Sri Petaling" in Kuala Lumpur's Sri Petaling district between 27 February to 1 March 2020 became a COVID-19 super-spreader event with more than 3,300 cases being linked to the event. By 19 May 2020, the Malaysian Director-General of Health Noor Hisham Abdullah confirmed that 48% of the country's COVID-19 cases (3,347) had been linked to the Kuala Lumpur Tablighi Jamaat cluster. Additionally, nearly 10% of attendees were overseas visitors, causing COVID-19 to spread to other countries in Southeast Asia. On 8 July 2020, this cluster was declared over by the Ministry of Health.

The COVID-19 pandemic in Thailand began with the identification of the first case in the country on 13 January 2020, and has been ongoing since.