Mirroring its impact on aviation, the COVID-19 pandemic has had a significant impact on airline companies due to travel restrictions and a slump in demand among travelers. Several airlines have declared bankruptcy, with some ceasing operations, while other airlines reported historic reductions in flights, as well as accelerating retirements of certain types, such as a Boeing 747 or the Airbus A340. By 8 October 2020, 43 commercial airlines had gone bankrupt, and many more were expected to follow. [1] In late October 2020, ACI Europe stated that 193 (mostly regional) of the 740 airports in Europe were also risking bankruptcy. [2]

On 11 June, the airline announced plans to lay off 22,000 out of its 135,000 employees, with around half the layoffs being German workers. [155]
In January 2021, Lufthansa AG CEO Cartsen Spohr stated all the Airbus A340s will be retired permanently and also stated that the eight remaining Airbus A380s and eight remaining Boeing 747-400s (both of which are currently in long-term storage) could also be eligible for permanent early retirement due to the COVID-19 impact on aviation as both the Airbus A380 and Boeing 747-400 types are inefficient and unprofitable, after Spohr stated that future of long-haul air travel will be served by smaller wide-body twin-jet planes such as the Airbus A330, Airbus A350, Boeing 777X, and Boeing 787 Dreamliner. [156]

Air Mauritius is the flag carrier airline of Mauritius. The airline is headquartered in Port Louis, Mauritius, with its hub based at Sir Seewoosagur Ramgoolam International Airport. The company was placed in voluntary administration on 22 April 2020 in wake of the COVID-19 pandemic.

EasyJet plc, styled as easyJet, is a British multinational low-cost airline group headquartered at London Luton Airport. It operates domestic and international scheduled services on over 1,000 routes in more than 30 countries via its affiliate airlines EasyJet UK, EasyJet Switzerland, and EasyJet Europe. EasyJet plc is listed on the London Stock Exchange and is a constituent of the FTSE 250 Index. EasyGroup Holdings Ltd (the investment vehicle of the airline's founder, Greek-Cypriot businessman Stelios Haji-Ioannou, is the largest shareholder with a 15.269% stake. It employs circa 14,000 people, based throughout Europe but mainly in the UK.

Pittsburgh International Airport, formerly Greater Pittsburgh International Airport, is a civil–military international airport in Findlay Township and Moon Township, Pennsylvania. Located about 10 miles west of downtown Pittsburgh, it is the primary international airport serving the Greater Pittsburgh Region as well as adjacent areas in West Virginia and Ohio. The airport is owned and operated by the Allegheny County Airport Authority and sees numerous flights a day to destinations throughout North America. PIT has four runways and covers 10,000 acres (4,000 ha).

Qatar Airways Company Q.C.S.C., operating as Qatar Airways, is the state-owned flag carrier of Qatar. Headquartered in the Qatar Airways Tower in Doha, the airline operates a hub-and-spoke network, flying to over 150 international destinations across Africa, Asia, Europe, the Americas, and Oceania from its base at Hamad International Airport, using a fleet of more than 200 aircraft. Qatar Airways Group employs more than 43,000 people. The carrier has been a member of the Oneworld alliance since October 2013, the first Persian Gulf carrier to sign with one of the three major airline alliances.

Etihad Airways is the second flag carrier of the United Arab Emirates. Its head office is in Khalifa City, Abu Dhabi, near Abu Dhabi International Airport. Etihad commenced operations in November 2003. It is the second-largest airline in the UAE after Emirates.

Air Zimbabwe (Pvt) Ltd is the national carrier of Zimbabwe, headquartered on the property of Harare International Airport, in Harare. From its hub at Harare International Airport, the carrier used to operate a network within southern Africa that also included Asia and London-Gatwick. Following financial difficulties, Air Zimbabwe ceased operations in late February 2012. Serving a reduced domestic network, the carrier resumed operations for a short period between May and early July 2012, when flights were again discontinued. Some flights were restarted on a discontinuous basis in November that year. The airline resumed operating some domestic routes as well as the regional service to Johannesburg on a daily basis in April 2013.

The Kangaroo Route refers to air routes flown between Australia and the United Kingdom via the Eastern Hemisphere. The route by definition found its name following the unique mode of travel of the kangaroo, as planes historically achieved the long distance in hops. The term is trademarked and traditionally used by Qantas, although it is used in the media and by airline competitors.

Blue Panorama Airlines S.p.A. is an Italian airline headquartered in Fiumicino operating scheduled and charter flights mostly to domestic and international leisure destinations. As of late 2021, the airline is in the process to change its brand name to Luke Air also retiring their former Blu-express brand used for domestic and short-haul destinations. Additional business charter flights used to be operated under the name Executive Blue. As of late October 2021, it suspended all operations until further notice.

Austrian Airlines AG, often shortened to Austrian, is the flag carrier of Austria and a subsidiary of the Lufthansa Group. The airline is headquartered on the grounds of Vienna International Airport in Schwechat where it also maintains its hub. As of July 2016, the airline flew to six domestic and more than 120 international year-round and seasonal destinations in 55 countries and is a member of the Star Alliance.

Brussels Airlines is the flag carrier and largest airline of Belgium, based and headquartered at Brussels Airport. It operates to over 100 destinations in Europe, North America, Africa and also offers charter services, maintenance and crew training. It is a member of the Star Alliance as well as the International Air Transport Association. The airline's IATA code SN is inherited from its predecessors, Sabena and SN Brussels Airlines. Brussels Airlines is part of the Lufthansa Group. The company slogan is ′You’re in good company′.

Jet Time A/S is a Danish charter airline with its head office in Kastrup, Tårnby Municipality, and its main base at Copenhagen Airport. 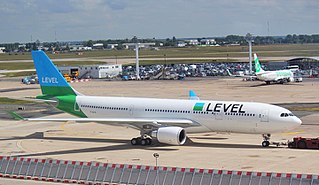 OpenSkies SASU was a French airline owned by International Airlines Group (IAG) which operated under the Level brand, and formerly operated under its own brand. Its headquarters were located in Rungis, near Paris.

La Compagnie, legally incorporated as DreamJet SAS, is a French boutique airline founded by Frantz Yvelin and based at Orly Airport in Paris, with headquarters in Le Bourget in the Paris metropolitan area. It offers all-business class flights between France and Newark Liberty International Airport.

Many aviation-related events took place in 2020. The aviation industry was impacted by the onset of the COVID-19 pandemic.

The COVID-19 pandemic has had a significant impact on the aviation industry due to travel restrictions and a decimation in demand among travelers.

Many aviation-related events have taken place in 2021. The aviation industry was impacted by the COVID-19 pandemic.