The COVID-19 pandemic was confirmed to have reached South Ossetia [nb 1] in May 2020.

Many schools and businesses in South Ossetia were closed on 20 March. [7]

Borders between Russia and Georgia were closed on 5 April. [7]

The first three cases of COVID-19 in South Ossetia were confirmed on 6 May. One of the cases was a retired man from North Ossetia, who arrived in South Ossetia on 20 April, and has been quarantined in a hospital since then. Another case, from Vladikavkaz, was a 14-year-old student of the Suvorov Military School. The third case also came from Vladikavkaz, but further details are unknown. Contact tracing has been conducted for these cases. [7]

In December, the Russian Armed Forces withdrew their mobile hospital they had established in the South Ossetian capital. [10]

In late February 2021, Politico Europe reported that South Ossetia has allocated the equivalent of $27,000 from its 2021 budget for purchases of the Sputnik V COVID-19 vaccine. [11]

In June, South Ossetian president Anatoliy Bibilov was vaccinated with the Sputnik vaccine. [12]

South Ossetia is a disputed territory in the South Caucasus, recognized by Russia and a few other countries as an independent state, but regarded by most of international actors as part of Georgia. [13]

Early in the pandemic, senior Georgian government officials called on the WHO and other international organisations to provide support to people living in the two breakaways. They said Georgia would not block movement to and from the regions. Unlike Abkhazia, South Ossetia refused to cooperate with Georgia and blocked movement from or to Tbilisi-controlled territory in February 2020. The South Ossetian authorities refused to admit the specialists from the WHO and other international organisations unless they entered through Russia rather than Georgia although the border with Russia had also been closed in March 2020. [13]

According to the International Crisis Group, of the fellow ex-Soviet breakaways, South Ossetia is at greatest risk due to high percent of elderly population (17%), severely under-equipped medical facilities, lack of properly trained medical professionals, and failure to procure significant aid from Russia, which generally provides a majority of the region's needs. [13] 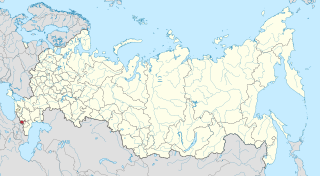 The Republic of North Ossetia–Alania, is a republic of Russia situated in the North Caucasus of Eastern Europe. Its population according to the 2010 Census was 712,980. Its capital is the city of Vladikavkaz. The republic's native Ossetians speak Ossetic, among the only few Iranian languages spoken in Europe.

Vladikavkaz, formerly known as Ordzhonikidze (Орджоники́дзе) and Dzaudzhikau (Дзауджика́у), is the capital city of the Republic of North Ossetia-Alania, Russia. It is located in the southeast of the republic at the foothills of the Caucasus Mountains, situated on the Terek River. Population: 311,693 (2010 Census); 315,068 (2002 Census); 300,198 (1989 Census). Vladikavkaz is one of the most populous cities in the North Caucasus.

South Ossetia, officially the Republic of South Ossetia – the State of Alania, or the Tskhinvali Region, is a de facto state in the South Caucasus. Most countries recognise its territory as part of Georgia. It has an officially stated population of just over 53,000 people, who live in an area of 3,900 km2, south of the Russian Caucasus, with 30,000 living in the capital city, Tskhinvali. Russia, Venezuela, Nicaragua, Nauru, and Syria recognize the separatist polity of the Republic of South Ossetia as a state. While Georgia does not exercise control over South Ossetia, the Georgian government and most members of the United Nations consider the territory part of Georgia, whose constitution designates the area as "the former autonomous district of South Ossetia", in reference to the South Ossetian Autonomous Oblast disbanded in 1990.

The Republic of South Ossetia is a self-proclaimed state which is recognized by Russia, Nicaragua, Venezuela, Syria, Nauru, Abkhazia, and Transnistria. South Ossetia declared independence from Georgia in 1991, but did not receive recognition from any UN member states until after the 2008 South Ossetia war. It is the only state recognized by UN Member States that recognizes the Donetsk People's Republic.

Yury Ionovich Morozov is a Russian businessman and politician, and a former Prime Minister of South Ossetia. Morozov was confirmed by the Parliament of South Ossetia on 5 July 2005. 23 Out of 24 MPs present voted in favour of his candidacy. On 18 August 2008, it was announced that Morozov and his government had been dismissed by South Ossetian President Eduard Kokoity. Kokoity said he thought the government was not handling the emergency aid from Russia, which was arriving after the 2008 South Ossetia war, good enough.

Abkhazia and South Ossetia are disputed territories in the Caucasus. The central government of Georgia considers the republics under military occupation by Russia. They are both recognised as independent by Russia, Venezuela, Nicaragua, Nauru and Syria. Russia's initial recognition of the independence of Abkhazia and South Ossetia occurred in the aftermath of the Russo-Georgian War in 2008. 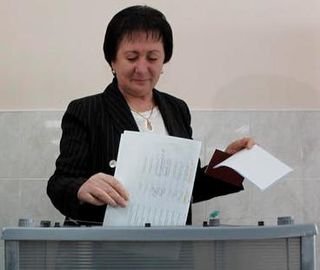 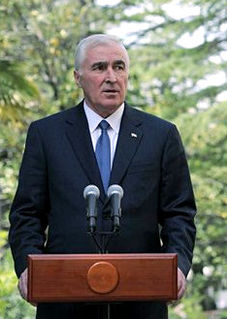 There are no confirmed cases of COVID-19 in Turkmenistan. The government has worked to control information about the virus, and experts suspect that it may be spreading in the country unreported. 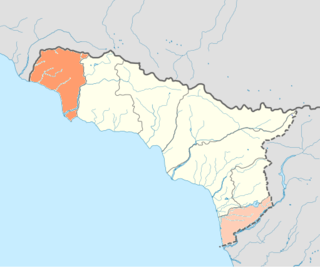 Sputnik V or Gam-COVID-Vac is an adenovirus viral vector vaccine for COVID-19 developed by the Gamaleya Research Institute of Epidemiology and Microbiology in Russia. It is the world's first registered combination vector vaccine for the prevention of COVID-19, having been registered on 11 August 2020 by the Russian Ministry of Health.

COVID-19 vaccination in Kazakhstan is an ongoing immunization campaign against severe acute respiratory syndrome coronavirus 2 (SARS-CoV-2), the virus that causes coronavirus disease 2019 (COVID-19), in response to the ongoing pandemic in the country.