Last updated October 17, 2021
Wikipedia list article
This article is about deaths of notable people. For more the article about COVID in South Africa, see COVID-19 pandemic in South Africa. For death rates per population, see COVID-19 pandemic death rates by country.
This is a dynamic list and may never be able to satisfy particular standards for completeness. You can help by adding missing items with reliable sources.

This is a list of notable people who are reported to have died from coronavirus disease 2019 (COVID-19) in South Africa, as a result of infection by the virus SARS-CoV-2 during the COVID-19 pandemic.

The Inkatha Freedom Party is a political party in South Africa. The party has been led by Velenkosini Hlabisa since the party's 2019 National General Conference. Mangosuthu Buthelezi founded the party in 1975 and led it until 2019. The IFP is currently the fourth largest party in the National Assembly of South Africa, in 2014 yielding third place to the Economic Freedom Fighters, formed in 2013. Although registered as a national party, it has had only minor electoral success outside its home province of KwaZulu-Natal. 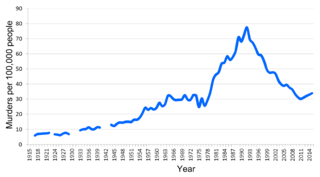 Crime in South Africa includes all violent and non-violent crimes that take place in the country of South Africa, or otherwise within its jurisdiction. Crime levels have been attributed to poverty, problems with delivery of public services, and wealth disparity. The Institute for Security Studies also highlighted factors beyond poverty and inequality, particularly social stress from uncaring environments in early childhood and subsequent lack of guardianship. South Africa's high crime rates, recidivism and overburdened criminal justice system have been described as a crisis which will require a radical rethink of crime and punishment in young people.

Zwelini Lawrence Mkhize is a South African doctor, legislator and politician who served as the Minister of Health from May 2019 until his resignation on Thursday 5 August 2021. In this role, he was prominent in South Africa's response to the COVID-19 pandemic. He previously served as the Minister of Cooperative Governance and Traditional Affairs from 2018 to 2019. He was the 5th Premier of KwaZulu-Natal from 2009 to 2013. Mkhize is a member of the African National Congress and was the party's Treasurer-General between 2012 and 2017. 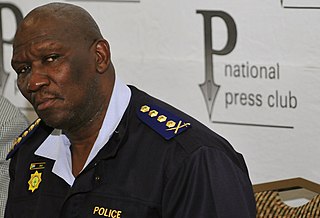 Bhekokwakhe "Bheki" John Cele is the South African Minister of the Police, appointed on 26 February 2018. He was previously the National Commissioner of the South African Police Service until October 2011, when he was suspended from duty, due to allegations of corruption He was appointed to this position in July 2009, replacing Jackie Selebi, who was suspended in January 2008 following charges of corruption. From 2004 to 2009 he held the post of Member of the Executive Council (MEC) for Transport, Safety and Security in KwaZulu-Natal after holding various other portfolios in the KwaZulu-Natal provincial government. He is a member of the African National Congress. 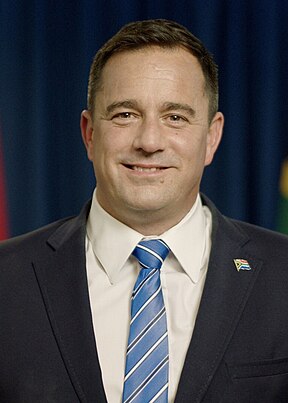 John Henry Steenhuisen is a South African politician who has served as the leader of the Opposition since October 2019 and has been the federal leader of the Democratic Alliance since November 2020, having served as the interim leader for one year from November 2019. He was chief whip of the official opposition from May 2014 until October 2019. Ideologically, Steenhuisen has been described as a liberal, a supporter of non-racialism and a firm believer in racial equality.

Jackson Mphikwa Mthembu was a South African politician who served as Minister in the Presidency of South Africa's government, and as a parliamentarian for the African National Congress (ANC). Previously, he served as the Whip of Parliament for the ruling ANC as well as the national spokesperson for the ANC. 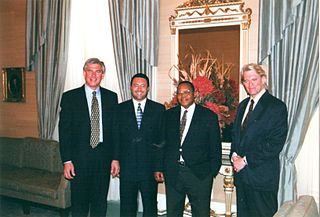 Baldwin Sipho "Ben" Ngubane was a politician from South Africa. He held multiple positions in the post-apartheid government of the country. In particular, he was Premier of KwaZulu-Natal and minister of Arts, Culture from 1994 until 31 August 1996 and from February 1999 until April 2004.

Zandile Ruth Thelma Gumede is a South African who has been serving as a Member of the KwaZulu-Natal Provincial Legislature since 2020. She served as the Executive Mayor of the eThekwini Metropolitan Municipality from 2016 until 2019. Gumede is a member of the African National Congress. 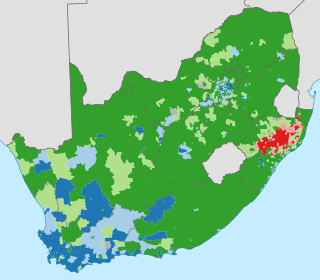 The 2019 South African general election was held on 8 May 2019 to elect a new President, National Assembly and provincial legislatures in each province. These were the sixth elections held since the end of apartheid in 1994 and determined who would become the next President of South Africa.

Events in the year 2020 in South Africa.

Mohammed Haniff Hoosen is a South African politician who has served as a Member for the National Assembly for the Independent Democrats (ID) (2007–2014) and currently for the Democratic Alliance (DA) (2014–present). Within the Official Opposition Shadow Cabinet, he serves as the DA's spokesperson on the Standing Committee on the Auditor-General. He was the Shadow Minister of Cooperative Governance and Traditional Affairs from 2019 to 2020. Hoosen was also the Shadow Minister of Home Affairs from 2014 to 2019.

Lungile Pepeta was a South African paediatric cardiologist, medical researcher, university professor and activist who also served as the chairperson of the Council of Medical Schemes. Lungile was regarded as one of the pioneers of the medical industry in South Africa especially for his crucial contributions regarding child health care. He also served as the executive dean in the faculty of Health Sciences at Nelson Mandela University and was the former head of the paediatric department and paediatric cardiology at Dora Nginza Hospital.

Events in the year 2021 in South Africa.

Muntukayise Bhekuyise Ntuli was a South African politician. A member of the African National Congress, he served as a Member of the National Assembly of South Africa from 1999 to 2003, when he resigned amid fraud allegations. He was then elected to the KwaZulu-Natal Legislature in 2009. On 11 September 2019, Ntuli became the Member of the Executive Council for Transport, Community Safety & Liaison, replacing Mxolisi Kaunda, who was elected Mayor of the eThekwini Metropolitan Municipality. Ntuli died on 16 January 2021 from complications of COVID-19.

Nombulelo Lilian Hermans was a South African politician of the African National Congress who served as a Member of the National Assembly of South Africa from 2019 until her death in 2021.

Civil unrest occurred in South Africa's KwaZulu-Natal and Gauteng provinces from 9 to 18 July 2021, sparked by the imprisonment of former President Jacob Zuma for contempt of court. Resulting protests against the incarceration triggered wider rioting and looting, much of it said to be undertaken by people not in support of Zuma and fuelled by job layoffs and economic inequality worsened by the COVID-19 pandemic. The unrest began in the province of KwaZulu-Natal on the evening of 9 July, and spread to the province of Gauteng on the evening of 11 July, and was the worst violence that South Africa had experienced since the end of Apartheid.

Sibongiseni Dhlomo is a South African politician for the African National Congress. Dhlomo is the current Deputy Minister of Health for the Republic of South Africa.