The president is elected by the National Assembly, the lower house of Parliament, and is usually the leader of the largest party, which has been the African National Congress since the first non-racial elections were held on 27 April 1994. The Constitution limits the president's time in office to two five-year terms. [2] The first president to be elected under the new constitution was Nelson Mandela. The incumbent is Cyril Ramaphosa, who was elected by the National Assembly on 15 February 2018 following the resignation of Jacob Zuma.

Under the interim constitution (valid from 1994 to 1996), there was a Government of National Unity, in which a member of Parliament (MP) from the largest opposition party was entitled to a position as Deputy President. Along with Thabo Mbeki, the last state president, F. W. de Klerk also served as Deputy President, in his capacity as the leader of the National Party which was the second-largest party in the new Parliament. But De Klerk later resigned and went into opposition with his party. A voluntary coalition government continues to exist under the new constitution (adopted in 1996), although there have been no appointments of opposition politicians to the post of Deputy President.

The president is required to be a member of the National Assembly at the time of his election. Upon his election, he immediately resigns his seat for the duration of his term. The president may be removed either by a motion of no-confidence or an impeachment trial.

The office of the president, and the roles that come with it, were established by Chapter Five of the Constitution of South Africa which was formed by a Constituent Assembly upon the dissolution of apartheid as state policy. [2]

A number of manifestations of the office have existed. Aspects of these offices exist within the presidency today. The executive leadership of the British colonies of Natal and of the Cape of Good Hope were invested in their Governors, likewise was invested in the presidents of the Boer republics of the Transvaal and the Orange Free State. Alternating sovereignty as a result of wars culminated in the Vereeniging Treaty signed in which concluded the South African War.

The Union of South Africa, a British Dominion, was established on 31 May 1910 [3] with the British monarch as titular head of state, represented by a viceroy, the governor-general.

Upon the declaration of the Republic of South Africa on 31 May 1961, the office of State President was created. [4] It was originally a ceremonial post, but became an executive post in 1984 when a new constitution abolished the post of Prime Minister and transferred its powers to the state president.

South Africa has a distinctive system for the election of its president. Unlike other former British colonies and dominions who have adopted a parliamentary republican form of government and those that follow the Westminster system, South Africa's president is both head of state and head of government and commander-in-chief of the South African National Defence Force (SANDF). Contrary to presidential systems around the world, the president of South Africa is elected by the Parliament of South Africa [5] rather than by the people directly. He is thus answerable to it in theory and able to influence legislation in practice as head of the majority party.

The president is elected at the first sitting of Parliament after an election, and whenever a vacancy arises. The president is elected by the National Assembly, the lower house of parliament, from among its members. The chief justice must oversee the election. Once elected, a person is no longer a member of the National Assembly. They must then be sworn in as President within five days of the election. Should a vacancy arise, the date of a new election must be set by the chief justice, but not more than 30 days after the vacancy occurs. [6]

The Constitution has thus prescribed a system combining both parliamentary and presidential systems in a unique manner. Only Botswana and a few other countries use a similar system. Between 1996 and 2003 Israel combined the two systems in an opposite way, with direct elections for the post of prime minister. [7]

Although the presidency is the key institution, it is hedged about with numerous checks and balances that prevent its total dominance over the government, as was the case in many African countries. The presidential term is five years, with a limit of two terms. Thus the electoral system attempts (at least on paper) to prevent the accumulation of power in the president as was during Apartheid or in many other African countries. [8]

According to chapter five of the constitution, the president can only exercise the powers of his or her office while within the Republic of South Africa. Should the president be outside of the country, or unable to fulfil the duties of the office, they may appoint an acting president.

The president is the head of state, head of government and commander-in-chief of the South African National Defence Force. The rights, responsibilities and remuneration of the president are enumerated in Chapter V of the Constitution of South Africa and subsequent amendments and laws passed by the Parliament of South Africa.

The executive powers of the Republic are vested in the president. He appoints various officials to positions listed in the Constitution however the most significant are the ministers and justices of the Supreme Court of Appeal and the Constitutional Court. Through the Cabinet, the president implements and enforces the constitution and laws and enforces his or her political objectives. Judges are appointed on the advice of the Judicial Service Commission.

The president plays a role in the formation of legislation. He or she signs bills into laws and can do the opposite, veto them (although subject to an override), refers bills back to Parliament or to the Constitutional Court or can call for a referendum. The president summons parliament, often delivering his or her objectives and agenda in a State of the Nation Address at the beginning of each session.

The president is the commander-in-chief of the South African National Defence Force thereby possessing influence or control over foreign and security policy. He or she is accorded the constitutional powers to declare war and make peace, negotiate and sign (although not ratify) treaties (and the alliances that may come with them), and receives and appoints diplomatic officials, confers honours and grants pardons. [10] 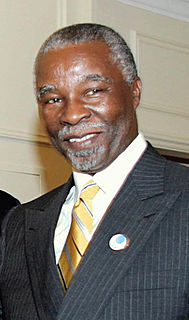 Thabo Mvuyelwa Mbeki is a South African politician who served as the second president of South Africa from June 1999 to 24 September 2008. On 20 September 2008, with about nine months left in his second term, Mbeki announced his resignation after being recalled by the National Executive Committee of the ANC, following a conclusion by judge C. R. Nicholson of improper interference in the National Prosecuting Authority (NPA), including the prosecution of Jacob Zuma for corruption. On 12 January 2009, the Supreme Court of Appeal unanimously overturned judge Nicholson's judgement but the resignation stood.

Pieter Willem Botha,, commonly known as "P. W." and Die Groot Krokodil, was a South African politician. He served as the last Prime Minister from 1978 to 1984 and the first executive State President from 1984 to 1989. 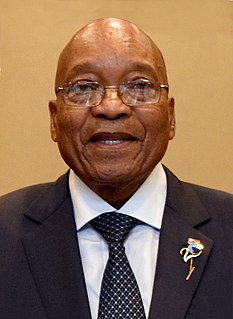 Jacob Gedleyihlekisa Zuma is a South African politician who served as the fourth President of South Africa from the 2009 general election until his resignation on 14 February 2018. Zuma is also referred to by his initials JZ and his clan name Msholozi. 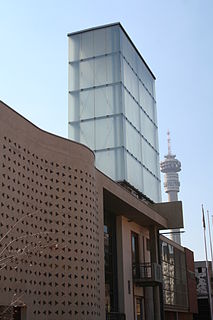 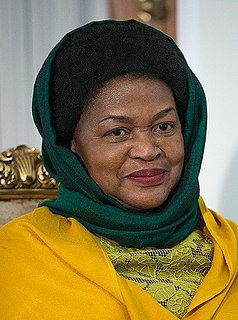 Baleka Mbete is a South African politician who served as the Speaker of the National Assembly of South Africa from May 2014 to May 2019. She was previously Speaker of the National Assembly from 2004 to 2008, and Deputy President of South Africa from 2008 to 2009 under Kgalema Motlanthe. She was elected National Chairperson of the African National Congress in 2007 and re-elected in 2012 and served until 18 December 2017. On the 18th of December 2017, during the ANC's 54th conference, Gwede Mantashe was elected Mbete's successor as National Chairperson of the ANC. 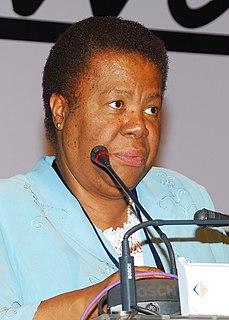 Grace Naledi Mandisa Pandor is a South African academic, educationist, lecturer and politician serving as the Minister of International Relations and Cooperation since 2019. She has served as a Member of Parliament (MP) for the African National Congress (ANC) since 1994. 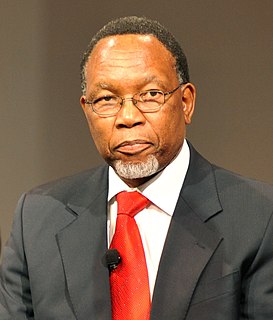 Kgalema Petrus Motlanthe is a South African politician who served as President of South Africa between 25 September 2008 and 9 May 2009, following the resignation of Thabo Mbeki. 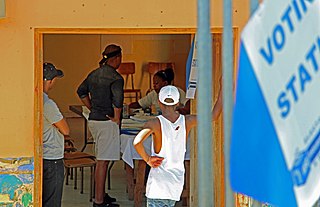 South Africa since 1994 transitioned from the system of apartheid to one of majority rule. The election of 1994 resulted in a change in government with the African National Congress (ANC) coming to power. The ANC retained power after subsequent elections in 1999, 2004, 2009 and 2014. Children born during this period are known as the born-free generation, and those aged eighteen or older, were able to vote for the first time in 2014.

The 52nd National Conference of the African National Congress (ANC) was held in Polokwane, Limpopo from 16–20 December 2007. It elected Jacob Zuma and supporters to the party's top leadership and National Executive Committee (NEC), representing a significant defeat for Thabo Mbeki, then the party's incumbent president and president of the country.

The following lists events that happened during 2008 in South Africa.

An indirect presidential election was held in South Africa on 25 September 2008 following the resignation of the President Thabo Mbeki. The ruling party, the African National Congress (ANC), with a two-thirds majority in the National Assembly of South Africa, elected Kgalema Motlanthe as President. The ANC indicated that Motlanthe would be a "caretaker" president until the 2009 election, after which ANC President Jacob Zuma would take office.

The Congress of the People (COPE) is a South African political party formed in 2008 by former members of the African National Congress (ANC). The party was founded by former ANC members Mosiuoa Lekota, Mbhazima Shilowa and Mluleki George to contest the 2009 general election. The party was announced following a national convention held in Sandton on 1 November 2008, and was founded at a congress held in Bloemfontein on 16 December 2008. The name echoes the 1955 Congress of the People at which the Freedom Charter was adopted by the ANC and other parties, a name strongly contested by the ANC in a legal move dismissed by the Pretoria High Court.

The Sixth Amendment of the Constitution of South Africa made a number of changes, most importantly giving the title of "Chief Justice" to the head of the Constitutional Court instead of the head of the Supreme Court of Appeal. It was passed by the National Assembly with the requisite two-thirds majority on 1 November 2001, and signed by President Thabo Mbeki on 20 November; it was published and came into force on the following day.