Kemayoran Athletes Village (Indonesian: Wisma Atlet Kemayoran) is located in Kemayoran District, Jakarta, Indonesia. The site was developed as the athlete's village for the 2018 Asian Games and 2018 Asian Para Games which was held in Jakarta, built on an area of 10 hectares land, which had 7,424 apartments in 10 towers. Total accommodation capacity of 22,272 at the village exceeded International Olympic Committee standards, which require Olympics hosts to provide rooms for at least 14,000 athletes. [1] [2] [3]

Use as COVID-19 hospital

During the COVID-19 pandemic in Indonesia, 4 towers were converted to emergency field hospitals. On 18 March 2020, the Ministry of Finance announced Kemayoran Athletes Village will be converted to house COVID-19 patients who show only mild symptoms after consultation from doctors. [5] [6] The conversion was officially completed on 23 March. [7] With a capacity of 3,000 beds, it is one of the biggest COVID-19 pandemic field hospitals in the world, being 3 times bigger than Huoshenshan Hospital or 2 times bigger than Leishenshan Hospital, both in Wuhan.[ citation needed ] 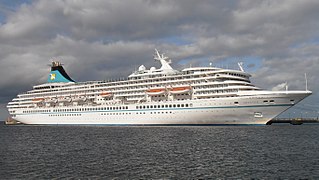 MV Artania is a cruise ship chartered since 2011 by Phoenix Reisen, a German-based travel agency and cruise ship operator. She was built for Princess Cruises by Wärtsilä at the Helsinki Shipyard, Finland, and was launched on 18 February 1984.

Kemayoran is a district of Central Jakarta, Jakarta in Indonesia. The area was best known as the location of the former Kemayoran Airport. Kemayoran has been transforming as a new CBD area of Jakarta. As of 2021, the Kemayoran CBD consists of numerous four and five star hotels, restaurants, premium office towers, hospitals as well as shopping and entertainment centers. The BMW Stadium is expected to be completed by October 2021. This stadium will be the largest capacity retractable roof stadium in Asia and the second-largest retractable roof stadium by capacity in the world, behind AT&T Stadium in Arlington, Texas. Kemayoran is also home to the Jakarta Fair, the largest and longest fair in Southeast Asia that attracts more than 4 million visitors annually.

The Indonesia International Motor Show is an annual automotive exhibition in Jakarta, Indonesia. It is organized by Dyandra Promosindo, which is a subsidiary of Kompas Gramedia. Since 2016, the exhibition is held in April at Jakarta International Expo, Kemayoran, Central Jakarta. 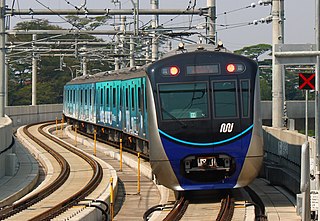 The Jakarta Mass Rapid Transit or Jakarta MRT is a rapid transit system in Jakarta, the capital city of Indonesia.

The 2018 Asian Games, officially known as the 18th Asian Games and also known as Jakarta–Palembang 2018, was a continental multi-sport event that was held from 18 August to 2 September 2018 in Jakarta and Palembang. 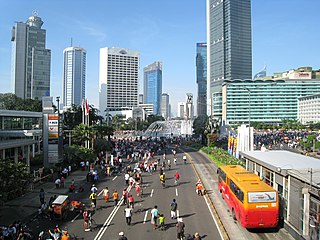 Jalan M.H. Thamrin or Jalan Thamrin is a major thoroughfare in Jakarta, Indonesia. The road is located at the center of Jakarta, running from the north end of Jalan Jenderal Sudirman at West Flood Canal at the south end to the roundabout near Arjuna Wijaya Statue Jakarta at the north end. Developed in the 1950s, the road was a landmark of post-colonial Indonesia and continues to have a prominent importance in Jakarta.

Corona Rintawan is an Indonesian physician specializing in emergency medicine. Active in the field since 2003, he has led the NGO Muhammadiyah's medical response team in multiple disasters, most recently the COVID-19 pandemic.

Edgar Xavier Marvelo is a wushu taolu athlete from Indonesia. He is a three-time world champion as well as a medalist at the Asian Games and Southeast Asian Games.