Cancer is one of the underlying diseases that increases the risk of COVID-19 developing to a serious illness. [1] [2]

The NHS of the United Kingdom has warned that those undergoing active chemotherapy or radiotherapy for lung cancer and those with bone marrow cancers are vulnerable to serious illness if they become infected with COVID-19. [3] [4] In Sweden, individuals who recently got chemotherapy were found to be at a higher risk for developing severe illness following COVID-19. [5]

The NHS in England stresses that individual patient decisions have to be made by multidisciplinary teams. [3] NHS has also established priority groups for those receiving anticancer treatments such that those with higher chances of success get prioritized for treatment over others. [3]

The European Society of Surgical Oncology advises against seeing patients with cancer who are over 70 years of age in clinic, unless it is urgent. [7]

Anakinra, sold under the brand name Kineret, is a biopharmaceutical medication used to treat rheumatoid arthritis, cryopyrin-associated periodic syndromes, familial Mediterranean fever, and Still's disease. It is a recombinant and slightly modified version of the human interleukin 1 receptor antagonist protein. It is marketed by Swedish Orphan Biovitrum. Anakinra is administered by subcutaneous injection.

Nicholas J. Vogelzang is a medical oncologist with Comprehensive Cancer Centers of Nevada (CCCN). He serves as Medical Director of the Research Executive Committee and Associate Chair of the Developmental Therapeutics and Genitourinary Committees for US Oncology Research. His research interests include clinical trials for genitourinary malignancies and mesothelioma.

Adjuvant therapy, also known as adjunct therapy, adjuvant care, or augmentation therapy, is therapy that is given in addition to the primary or initial therapy to maximize its effectiveness. The surgeries and complex treatment regimens used in cancer therapy have led the term to be used mainly to describe adjuvant cancer treatments. An example of such adjuvant therapy is the additional treatment usually given after surgery where all detectable disease has been removed, but where there remains a statistical risk of relapse due to the presence of undetected disease. If known disease is left behind following surgery, then further treatment is not technically adjuvant.

Atrasentan is an experimental drug that is being studied for the treatment of various types of cancer, including non-small cell lung cancer. It is also being investigated as a therapy for diabetic kidney disease. 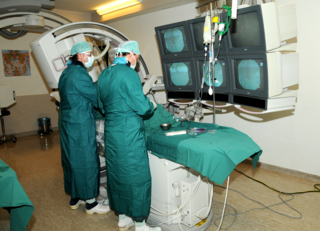 Selective internal radiation therapy (SIRT), also known as transarterial radioembolization (TARE), radioembolization or intra-arterial microbrachytherapy is a form of radiation therapy used in interventional radiology to treat cancer. It is generally for selected patients with surgically unresectable cancers, especially hepatocellular carcinoma or metastasis to the liver. The treatment involves injecting tiny microspheres of radioactive material into the arteries that supply the tumor, where the spheres lodge in the small vessels of the tumor. Because this treatment combines radiotherapy with embolization, it is also called radioembolization. The chemotherapeutic analogue is called chemoembolization, of which transcatheter arterial chemoembolization (TACE) is the usual form.

Afatinib, sold under the brand name Gilotrif among others, is a medication used to treat non-small cell lung carcinoma (NSCLC). It belongs to the tyrosine kinase inhibitor family of medications. It is taken by mouth.

Ramucirumab is a fully human monoclonal antibody (IgG1) developed for the treatment of solid tumors. This drug was developed by ImClone Systems Inc. It was isolated from a native phage display library from Dyax. 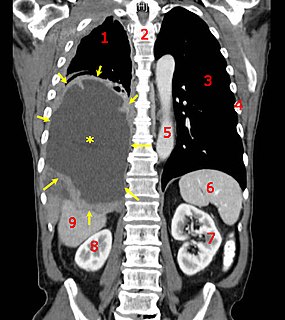 Oncology is a branch of medicine that deals with the prevention, diagnosis, and treatment of cancer. A medical professional who practices oncology is an oncologist. The name's etymological origin is the Greek word ὄγκος (óngkos), meaning 1. "burden, volume, mass" and 2. "barb", and the Greek word λόγος (logos), meaning "study". The neoclassical term oncology was used from 1618, initially in neo-Greek, in cognizance of Galen's work on abnormal tumors, De tumoribus præter naturam.

Rucaparib, sold under the brand name Rubraca, is a PARP inhibitor used as an anti-cancer agent. Rucaparib is a first-in-class pharmaceutical drug targeting the DNA repair enzyme poly-ADP ribose polymerase-1 (PARP-1). It is approved in the United States and in Europe as third line treatment in BRCA-mutated ovarian cancer.

Pembrolizumab, sold under the brand name Keytruda, is a humanized antibody used in cancer immunotherapy that treats melanoma, lung cancer, head and neck cancer, Hodgkin lymphoma, stomach cancer, and cervical cancer. It is given by slow injection into a vein.

Cancer and nausea are associated in about fifty percent of people affected by cancer. This may be as a result of the cancer itself, or as an effect of the treatment such as chemotherapy, radiation therapy, or other medication such as opiates used for pain relief. About 70 to 80% of people undergoing chemotherapy experience nausea or vomiting. Nausea and vomiting may also occur in people not receiving treatment, often as a result of the disease involving the gastrointestinal tract, electrolyte imbalance, or as a result of anxiety. Nausea and vomiting may be experienced as the most unpleasant side effects of cytotoxic drugs and may result in patients delaying or refusing further radiotherapy or chemotherapy.

The PARAMOUNT trial is a clinical trial studying non-small-cell lung carcinoma (NSCLC). The trial was sponsored by Eli Lilly and Company and was conducted in several European countries and Canada. It was registered in November 2008 and was projected to end in September 2013. 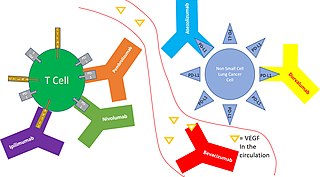 Durvalumab is an FDA-approved immunotherapy for cancer, developed by Medimmune/AstraZeneca. It is a human immunoglobulin G1 kappa (IgG1κ) monoclonal antibody that blocks the interaction of programmed cell death ligand 1 (PD-L1) with the PD-1 (CD279).

Cancer in adolescents and young adults is cancer which occurs in those between the ages of 15 and 39. This occurs in about 70,000 people a year in the United States—accounting for about 5 percent of cancers. This is about six times the number of cancers diagnosed in children ages 0–14. Globally, nearly 1 million young adults between the ages of 20 and 39 were diagnosed with cancer in 2012, and more than 350,000 people in this age range died from cancer.

The UK Coronavirus Cancer Monitoring Project or UKCCMP is a clinician-led reporting project established to safeguard, monitor and protect individuals living with cancer from COVID-19 across the United Kingdom.

Berzosertib is a drug originally invented by Vertex Pharmaceuticals and licensed to Merck KGaA, Darmstadt, Germany for development. It acts as a potent inhibitor of the enzyme ataxia telangiectasia and Rad3 related (ATR) and with lower potency as an inhibitor of ATM serine/threonine kinase (ATM). These enzymes are both involved in detecting DNA damage as part of cell cycle checkpoints during cell division. By inhibiting their activity, berzosertib interferes with the ability of rapidly dividing cells to detect damage to DNA, and this makes it useful as a potential treatment for some forms of cancer by causing accumulation of DNA damage in the cancer cells and thus reducing their viability. It has progressed furthest in trials for the treatment of ovarian cancer, though also shows activity against numerous other cancer types.

Adele Kay Fielding is a British physician who is a Professor of Haematology at University College London. Fielding was elected President of the British Society for Haematology in 2020.