Last updated November 23, 2021
This article is about Platform for European Preparedness Against (Re-)emerging Epidemics. For other uses, see Prepare.
European Union's project against epidemics

PREPARE is an acronym for the European Union's Platform for European Preparedness Against (Re-)emerging Epidemics. [1] The coordinator is professor Herman Goossens of the University of Antwerp. [2] It was activated on 31 December 2019 in response to coronavirus disease 2019 (COVID-19) and as of February 2020 [update] was operating in outbreak response mode 2 (mobilisation), the second of three modes. [3]

Bioterrorism is terrorism involving the intentional release or dissemination of biological agents. These agents are bacteria, viruses, insects, fungi or toxins, and may be in a naturally occurring or a human-modified form, in much the same way as in biological warfare. Further, modern agribusiness is vulnerable to anti-agricultural attacks by terrorists, and such attacks can seriously damage economy as well as consumer confidence. The latter destructive activity is called agrobioterrorism and is a subtype of agro-terrorism.

The Pandemic Preparedness and Response Act is a bill introduced on October 5, 2005 by U.S. Senators Harry Reid, Evan Bayh, Dick Durbin, Ted Kennedy, Barack Obama, and Tom Harkin in response to the growing threat of an outbreak of avian influenza. The bill calls for:

The Johns Hopkins Center for Health Security is an independent, nonprofit organization of the Johns Hopkins Bloomberg School of Public Health. The Center works to protect people’s health from epidemics and pandemics and ensures that communities are resilient to major challenges. The Center is also concerned with biological weapons and the biosecurity implications of emerging biotechnology. 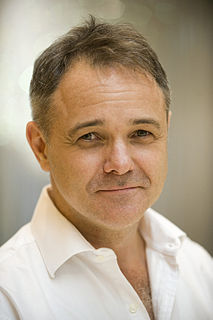 Sir Jeremy James Farrar is a British medical researcher and director of the Wellcome Trust since 2013. He was previously a professor of tropical medicine at the University of Oxford.

The Nigeria Centre for Disease Control (NCDC) is the national public health institute for Nigeria. It is a federal government agency under the Federal Ministry of Health (Nigeria), with its headquarters in Abuja, Federal Capital Territory. 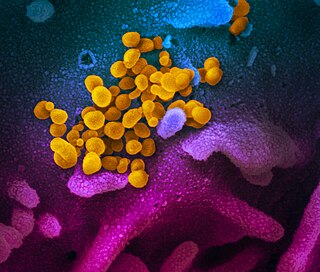 Disease X is a placeholder name that was adopted by the World Health Organization (WHO) in February 2018 on their shortlist of blueprint priority diseases to represent a hypothetical, unknown pathogen that could cause a future epidemic. The WHO adopted the placeholder name to ensure that their planning was sufficiently flexible to adapt to an unknown pathogen. Director of the US National Institute of Allergy and Infectious Diseases Anthony Fauci stated that the concept of Disease X would encourage WHO projects to focus their research efforts on entire classes of viruses, instead of just individual strains, thus improving WHO capability to respond to unforeseen strains. In 2020, it was speculated, including among some of the WHO's own expert advisors, that COVID-19, caused by SARS-CoV-2 virus strain, met the requirements to be the first Disease X.

The Pandemic and All-Hazards Preparedness and Advancing Innovation Act (PAHPAI) is legislation introduced and passed by the U.S. Congress in 2019 that aims to improve the nation's preparation and response to public health threats, including both natural threats and deliberate man-made threats.

Herman Goossens is professor of microbiology at the University of Antwerp where he is head of the Laboratory of Medical Microbiology, part of PREPARE, the European Union's Platform for European Preparedness Against (Re-)emerging Epidemics of which he is the coordinator.

Prepare or variation, may refer to: 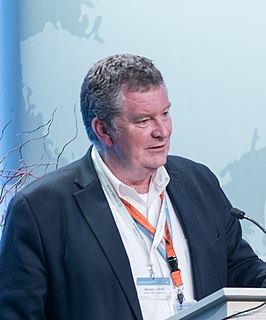 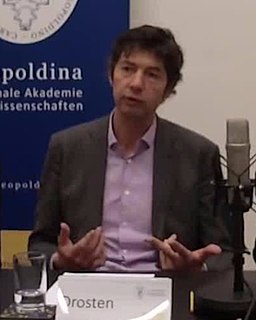 Christian Heinrich Maria Drosten is a German virologist whose research focus is on novel viruses (emergent viruses). During the COVID-19 pandemic, Drosten came to national prominence as an expert on the implications and actions required to combat the illness in Germany.

Caitlin M. Rivers is an American epidemiologist who as Senior Scholar at the Johns Hopkins Center for Health Security and assistant professor at the Johns Hopkins Bloomberg School of Public Health, specializing on improving epidemic preparedness. Rivers is currently working on the American response to the COVID-19 pandemic with a focus on the incorporation of infectious disease modeling and forecasting into public health decision making.

The Global Preparedness Monitoring Board is a joint arm of the WHO and the World Bank. It was created by both organizations in response to the Western African Ebola virus epidemic. 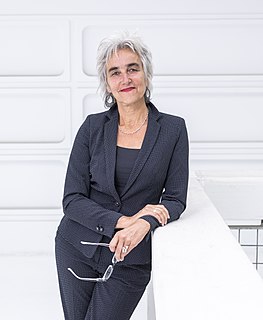