Private Joseph Ashitey Hammond (born c. 1925) is a Ghanaian Second World War veteran, known for his achievements in fundraising during the COVID-19 pandemic. He is a veteran of the Burma campaign.

Hammond came to media attention in May 2020, after walking 14 miles in a week to raise money for coronavirus charities. [1] He took his inspiration from Sir Thomas Moore, popularly known as Captain Tom, a former British Army officer who has similar footsteps in raising funds to support the vulnerable prior to his 100th birthday in April. [2]

Hammond joined the Gold Coast Regiment, then part of the Royal West African Frontier Force, on 31 July 1943. He was trained as a mechanic, and posted to Takoradi until November, when he was sent to Khulna with the 3rd Battalion, Gold Coast Regiment for further training. The battalion was attached to the 82nd West African Division and served in western Burma (now Myanmar), during which Hammond and his battalion were involved in heavy fighting. [3]

During the Allied capture of Kindaungyyi, Hammond developed an eye infection, and was sent to India for treatment, where he would remain until the end of the war. He returned home in December 1945, and was demobilised in January 1946. [4] He is known to be the only survivor to have served in the Gold Coast Regiment. [5]

In May 2020 during the global COVID-19 pandemic, Hammond embarked on a daily walk to raise $600,000 to support frontline workers and vulnerable veterans across Africa by walking two miles in a day for a week. [6] On the final day of his walk, 25 May, Africa Day, he was joined by Iain Walker, High Commissioner of the United Kingdom to Ghana. [7]

He was congratulated by Prince Harry, Duke of Sussex in June, and was informed later the same month he was to receive a Commonwealth Points of Light award from Elizabeth II, as head of the Commonwealth of Nations. [8] [9] (Hammond had previously met Prince Harry in November 2019, at the Field of Remembrance war memorial event at Westminster Abbey.) [8] [9] In July, having raised £40,000 he was visited at home in Osu by the British Deputy High Commissioner, Thomas Hartley, and the British defence attaché to Ghana, Lieutenant Colonel Alastair Mckechnie, who delivered him his Points of Lights award and a handwritten letter from Charles, Prince of Wales. [9]

Hammond recently clocked the 14 miles walk in a week to raise funds to support the vulnerable on May 25. He hopes to embark on another walk to meet his overall goal of 30 miles. [10] [11]

Joseph Hammond was honoured for his veteran service at the 2018 GUBA, a Ghana UK Based Achievement Awards scheme which is set to award British-Ghanaians and diasporans for their outstanding work on the African continent. [12]

The Accra Riots started on 28 February 1948 in Accra, the capital of present-day Ghana, which at the time was the British colony of the Gold Coast. A protest march by unarmed ex-servicemen who were agitating for their benefits as veterans of World War II was broken up by police, leaving three leaders of the group dead. Among those killed was Sergeant Nii Adjetey, who has since been memorialized in Accra.

Akosua Dentaa Amoateng MBE, best known by her stage name Dentaa, is a British Ghanaian entrepreneur, actress, TV presenter, singer, producer and manager. She was awarded an MBE in the 2016 Birthday Honours and in 2017 she received the Ghana Peace Awards Humanitarian Service Laureate in Accra, Ghana. In mid-September of 2020 she was appointed by Asante Kotoko S.C. as their International Relations Manager.

Ishmael Ashitey is a Ghanaian politician and a member of the New Patriotic Party in Ghana. He is the Greater Accra Regional minister of Ghana. He was appointed by President Nana Addo Danquah Akuffo-Addo in January 2017 and was approved by the Parliament in February 2017. He was a Member of Parliament.

Daniel Okyere Donkor popularly known with his stage name Mizter Okyere is a Ghanaian saxophonist and producer. In 2019, he was awarded the Best Instrumentalist of the Year at the Vodafone Ghana Music Awards. 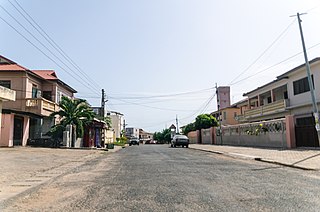 Strikes occurred during the COVID-19 pandemic due to many factors including: hazard pay or low pay, unsafe working conditions, inability to pay rent. These strikes are separate from the various protests that occurred over responses to the pandemic.

Captain Sir Thomas Moore, more popularly known as Captain Tom, was a British Army officer and fundraiser who made international headlines in 2020 when he raised money for charity in the run-up to his 100th birthday during the COVID-19 pandemic. He served in India and the Burma campaign during the Second World War, and later became an instructor in armoured warfare. After the war, he worked as managing director of a concrete company and was an avid motorcycle racer.

The COVID-19 pandemic has impacted hospitals around the world. Many hospitals have scaled back or postponed non-emergency care. This has medical consequences for the people served by the hospitals, and it has financial consequences for the hospitals. Health and social systems across the globe are struggling to cope. The situation is especially challenging in humanitarian, fragile and low-income country contexts, where health and social systems are already weak. Health facilities in many places are closing or limiting services. Services to provide sexual and reproductive health care risk being sidelined, which will lead to higher maternal mortality and morbidity. The pandemic also resulted in the imposition of COVID-19 vaccine mandates in places such as California and New York for all public workers, including hospital staff.

During the COVID-19 pandemic, Food insecurity has intensified in many places – in the second quarter of 2020 there were multiple warnings of famine later in the year. According to early predictions, hundreds of thousands of people would likely die and millions more experience hunger without concerted efforts to address issues of food security. As of October 2020, these efforts were reducing the risk of widespread starvation due to the COVID-19 pandemic.

The Coronavirus Alleviation Program Business Support Scheme (CAPBuSS) was launched in Ghana on 19 May 2020 by President Nana Akufo-Addo. It was formed as part of Ghana's government intention of providing support to MSMEs who were affected by COVID-19 pandemic. It was presented by an agency under the Ministry of Trade and Industry in Ghana called NBSSI. The president announced GH¢1 billion after it was approved by the parliament of Ghana. The NBSSI ended the disbursement of funds in January 2021.

Ernest Kofi Abbeyquaye also known as Ernest Abbeyquaye, is a Ghanaian filmmaker. He was a filmmaker, producer, and director for the Ghana Film Industry Corporation (GFIC).

Pistis Ghana is a Ghanaian fashion brand based in Accra. It was founded by husband and wife, Kabutey and Sumaiya Dzietror in 2008 after graduating from Joyce Ababio's Vogue Style School of Fashion and Design.

Roberta Annan is a Ghanaian businesswoman and the founder of the African Fashion Foundation. She is also an investor, philanthropist, and a United Nations Environment Programme Goodwill Ambassador. Annan was the youngest African to be inducted into the African Leadership Hall of Fame. A graduate of Carleton University and Georgetown University, Annan began her career with an internship at the U.N. headquarters in New York City. Annan is the owner of Annan Capital Partners, an investment company in Sub-Saharan Africa, and ALDG, a portfolio of assets in sustainable hospitality, agribusiness, and sustainable luxury in Africa.