An inactivated vaccine (or killed vaccine) is a vaccine consisting of virus particles, bacteria, or other pathogens that have been grown in culture and then killed to destroy disease-producing capacity. In contrast, live vaccines use pathogens that are still alive (but are almost always attenuated, that is, weakened). Pathogens for inactivated vaccines are grown under controlled conditions and are killed as a means to reduce infectivity and thus prevent infection from the vaccine. [1]

Inactivated vaccines were first developed in the late 1800s and early 1900s for cholera, plague, and typhoid. [2] Today, inactivated vaccines exist for many pathogens, including influenza, polio (IPV), rabies, hepatitis A and pertussis. [3]

Because inactivated pathogens tend to produce a weaker response by the immune system than live pathogens, immunologic adjuvants and multiple "booster" injections may be required in some vaccines to provide an effective immune response against the pathogen. [1] [4] [5] Attenuated vaccines are often preferable for generally healthy people because a single dose is often safe and very effective. However, some people cannot take attenuated vaccines because the pathogen poses too much risk for them (for example, elderly people or people with immunodeficiency). For those patients, an inactivated vaccine can provide protection.

The pathogen particles are destroyed and cannot divide, but the pathogens maintain some of their integrity to be recognized by the immune system and evoke an adaptive immune response. [6] [7] When manufactured correctly, the vaccine is not infectious, but improper inactivation can result in intact and infectious particles.[ citation needed ]

When a vaccine is administered, the antigen will be taken up by an antigen-presenting cell (APC) and transported to a draining lymph node in vaccinated people. The APC will place a piece of the antigen, an epitope, on its surface along with a major histocompatibility complex (MHC) molecule. It can now interact with and activate T cells. The resulting helper T cells will then stimulate an antibody-mediated or cell-mediated immune response and develop an antigen-specific adaptive response. [8] [9] This process creates an immunological memory against the specific pathogen and allows the immune system to respond more effectively and rapidly after subsequent encounters with that pathogen. [6] [8] [9]

Inactivated vaccines often refer to non-live vaccines. [3] [8] They are further classified depending on the method used to inactivate the pathogen: [3] [4] 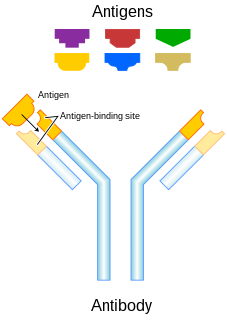 In immunology, an antigen (Ag) is a molecule or molecular structure that can bind to a specific antibody or T-cell receptor. The presence of antigens in the body may trigger an immune response. The term antigen originally referred to a substance that is an antibody generator. Antigens can be proteins, peptides, polysaccharides, lipids, nucleic acids, or other biomolecules. 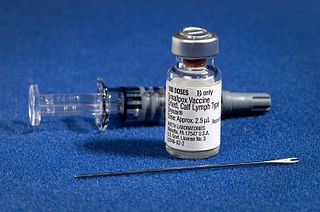 A vaccine is a biological preparation that provides active acquired immunity to a particular infectious disease. A vaccine typically contains an agent that resembles a disease-causing microorganism and is often made from weakened or killed forms of the microbe, its toxins, or one of its surface proteins. The agent stimulates the body's immune system to recognize the agent as a threat, destroy it, and to further recognize and destroy any of the microorganisms associated with that agent that it may encounter in the future. Vaccines can be prophylactic, or therapeutic. Some vaccines offer full sterilizing immunity, in which infection is prevented completely. 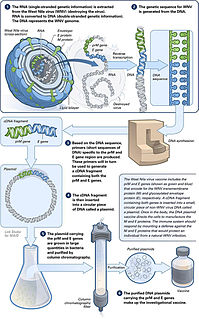 In biology, immunity is the capability of multicellular organisms to resist harmful microorganisms. Immunity involves both specific and nonspecific components. The nonspecific components act as barriers or eliminators of a wide range of pathogens irrespective of their antigenic make-up. Other components of the immune system adapt themselves to each new disease encountered and can generate pathogen-specific immunity. 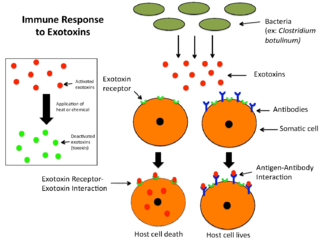 An exotoxin is a toxin secreted by bacteria. An exotoxin can cause damage to the host by destroying cells or disrupting normal cellular metabolism. They are highly potent and can cause major damage to the host. Exotoxins may be secreted, or, similar to endotoxins, may be released during lysis of the cell. Gram negative pathogens may secrete outer membrane vesicles containing lipopolysaccharide endotoxin and some virulence proteins in the bounding membrane along with some other toxins as intra-vesicular contents, thus adding a previously unforeseen dimension to the well-known eukaryote process of membrane vesicle trafficking, which is quite active at the host-pathogen interface. 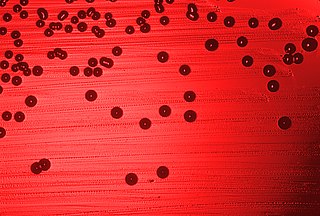 A conjugate vaccine is a type of subunit vaccine which combines a weak antigen with a strong antigen as a carrier so that the immune system has a stronger response to the weak antigen. 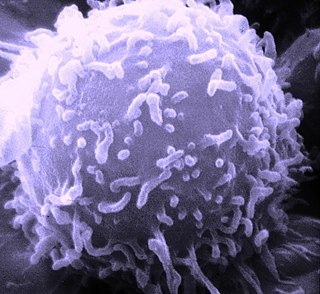 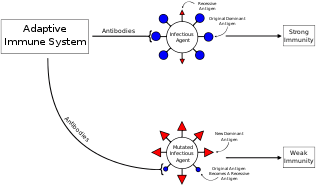 Original antigenic sin, also known as antigenic imprinting or the Hoskins effect, refers to the propensity of the body's immune system to preferentially utilize immunological memory based on a previous infection when a second slightly different version of that foreign pathogen is encountered. This leaves the immune system "trapped" by the first response it has made to each antigen, and unable to mount potentially more effective responses during subsequent infections. Antibodies or T-cells induced during infections with the first variant of the pathogen are subject to a form of original antigenic sin, termed repertoire freeze.

Artificial induction of immunity makes people immune to specific diseases by means other than waiting for them to catch the disease. The purpose is to reduce the risk of death and suffering.

In immunology, an adjuvant is a substance that increases or modulates the immune response to a vaccine. The word "adjuvant" comes from the Latin word adiuvare, meaning to help or aid. "An immunologic adjuvant is defined as any substance that acts to accelerate, prolong, or enhance antigen-specific immune responses when used in combination with specific vaccine antigens."

An attenuated vaccine is a vaccine created by reducing the virulence of a pathogen, but still keeping it viable. Attenuation takes an infectious agent and alters it so that it becomes harmless or less virulent. These vaccines contrast to those produced by "killing" the virus.

Immune stimulating complexes (ISCOMs) are spherical open cage-like structures that are spontaneously formed when mixing together cholesterol, phospholipids and Quillaja saponins under a specific stoichiometry. The complex displays immune stimulating properties and is thus mainly used as a vaccine adjuvant in order to induce a stronger immune response and longer protection.

A subunit vaccine is a vaccine that contains purified parts of the pathogen that are antigenic, or necessary to elicit a protective immune response. A "subunit" vaccine doesn't contain the whole pathogen, unlike live attenuated or inactivated vaccine, but contains only the antigenic parts such as proteins, polysaccharides or peptides. Because the vaccine doesn't contain "live" components of the pathogen, there is no risk of introducing the disease, and is safer and more stable than vaccine containing whole pathogens. Other advantages include being well-established technology and being suitable for immunocompromised individuals. Disadvantages include being relatively complex to manufacture compared to some vaccines, possibly requiring adjuvants and booster shots, and requiring time to examine which antigenic combinations may work best.

Peptide-based synthetic vaccines, also called epitope vaccines, are subunit vaccines made from peptides. The peptides mimic the epitopes of the antigen that triggers direct or potent immune responses. Peptide vaccines can not only induce protection against infectious pathogens and non-infectious diseases but also be utilized as therapeutic cancer vaccines, where peptides from tumor-associated antigens are used to induce an effective anti-tumor T-cell response. 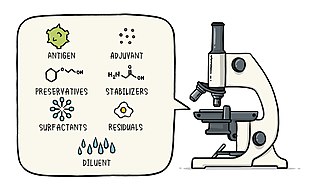 A vaccine dose contains many ingredients, very little of which is the active ingredient, the immunogen. A single dose may have merely nanograms of virus particles, or micrograms of bacterial polysaccharides. A vaccine injection, oral drops or nasal spray is mostly water. Other ingredients are added to boost the immune response, to ensure safety or help with storage, and a tiny amount of material is left-over from the manufacturing process. Very rarely, these materials can cause an allergic reaction in people who are very sensitive to them.

A genetic vaccine is a vaccine that contains nucleic acids such as DNA or RNA that lead to protein biosynthesis of antigens within a cell. Genetic vaccines thus include DNA vaccines, RNA vaccines and viral vector vaccines.