Virus-like particles (VLPs) are molecules that closely resemble viruses, but are non-infectious because they contain no viral genetic material. They can be naturally occurring or synthesized through the individual expression of viral structural proteins, which can then self assemble into the virus-like structure. [1] [2] [3] [4] Combinations of structural capsid proteins from different viruses can be used to create recombinant VLPs. Both in-vivo assembly (i.e., assembly inside E. coli bacteria via recombinant co-expression of multiple proteins) and in-vitro assembly (i.e., protein self-assembly in a reaction vessel using stoichiometric quantities of previously purified proteins) have been successfully shown to form virus-like particles. VLPs derived from the Hepatitis B virus (HBV) and composed of the small HBV derived surface antigen (HBsAg) were described in 1968 from patient sera. [5] VLPs have been produced from components of a wide variety of virus families including Parvoviridae (e.g. adeno-associated virus), Retroviridae (e.g. HIV), Flaviviridae (e.g. Hepatitis C virus), Paramyxoviridae (e.g. Nipah) and bacteriophages (e.g. Qβ, AP205). [1] VLPs can be produced in multiple cell culture systems including bacteria, mammalian cell lines, insect cell lines, yeast and plant cells. [6] [7]

VLPs can also refer to structures produced by some LTR retrotransposons (under Ortervirales) in nature. These are defective, immature virions, sometimes containing genetic material, that are generally non-infective due to the lack of a functional viral envelope. [8] [9] In addition, wasps produce polydnavirus vectors with pathogenic genes (but not core viral genes) or gene-less VLPs to help control their host. [10] [11]

VLPs are a candidate delivery system for genes or other therapeutics. [12] These drug delivery agents have been shown to effectively target cancer cells in vitro. [13] It is hypothesized that VLPs may accumulate in tumor sites due to the enhanced permeability and retention effect, which could be useful for drug delivery or tumor imaging. [14]

VLPs are useful as vaccines. VLPs contain repetitive, high density displays of viral surface proteins that present conformational viral epitopes that can elicit strong T cell and B cell immune responses. [15] The particles' small radius of roughly 20-200 nm allows sufficient draining into lymph nodes. Since VLPs cannot replicate, they provide a safer alternative to attenuated viruses. VLPs were used to develop FDA-approved vaccines for Hepatitis B and human papillomavirus, which are commercially available. [16]

Vaccine production can begin as soon as the virus strain is sequenced and can take as little as 12 weeks, compared to 9 months for traditional vaccines. In early clinical trials, VLP vaccines for influenza appeared to provide complete protection against both the Influenza A virus subtype H5N1 and the 1918 flu pandemic. [18] Novavax and Medicago Inc. have run clinical trials of their VLP flu vaccines. [19] [20] Several VLP vaccines for COVID-19, including Novavax, are under development. [16] [21]

VLPs have been used to develop a pre-clinical vaccine candidate against chikungunya virus. [15]

The understanding of self-assembly of VLPs was once based on viral assembly. This is rational as long as the VLP assembly takes place inside the host cell (in vivo), though the self-assembly event was found in vitro from the very beginning of the study about viral assembly. [31] Study also reveals that in vitro assembly of VLPs competes with aggregation [32] and certain mechanisms exist inside the cell to prevent the formation of aggregates while assembly is ongoing. [33]

Attaching proteins, nucleic acids, or small molecules to the VLP surface, such as for targeting a specific cell type or for raising an immune response is useful. In some cases a protein of interest can be genetically fused to the viral coat protein. [34] However, this approach sometimes leads to impaired VLP assembly and has limited utility if the targeting agent is not protein-based. An alternative is to assemble the VLP and then use chemical crosslinkers, [35] reactive unnatural amino acids [36] or SpyTag/SpyCatcher reaction [37] [38] in order to covalently attach the molecule of interest. This method is effective at directing the immune response against the attached molecule, thereby inducing high levels of neutralizing antibody and even being able to break tolerance to self-proteins displayed on VLPs. [38] 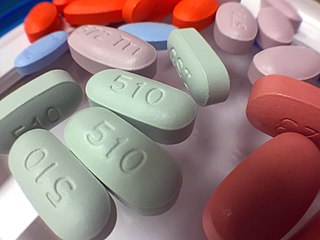 Antiviral drugs are a class of medication used for treating viral infections. Most antivirals target specific viruses, while a broad-spectrum antiviral is effective against a wide range of viruses. Unlike most antibiotics, antiviral drugs do not destroy their target pathogen; instead they inhibit its development. 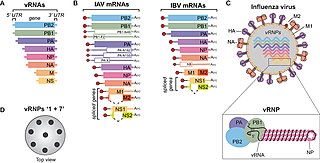 Duck hepatitis B virus, abbreviated DHBV, is part of the genus Avihepadnavirus of the Hepadnaviridae, and is the causal agent of duck hepatitis B. 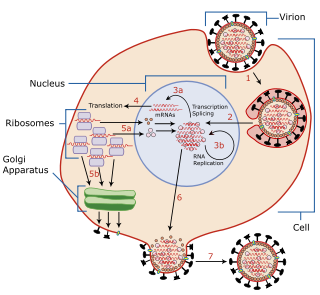 Viral entry is the earliest stage of infection in the viral life cycle, as the virus comes into contact with the host cell and introduces viral material into the cell. The major steps involved in viral entry are shown below. Despite the variation among viruses, there are several shared generalities concerning viral entry.

A virus is a submicroscopic infectious agent that replicates only inside the living cells of an organism. Viruses infect all life forms, from animals and plants to microorganisms, including bacteria and archaea. Since Dmitri Ivanovsky's 1892 article describing a non-bacterial pathogen infecting tobacco plants and the discovery of the tobacco mosaic virus by Martinus Beijerinck in 1898, more than 9,000 virus species have been described in detail of the millions of types of viruses in the environment. Viruses are found in almost every ecosystem on Earth and are the most numerous type of biological entity. The study of viruses is known as virology, a subspeciality of microbiology. 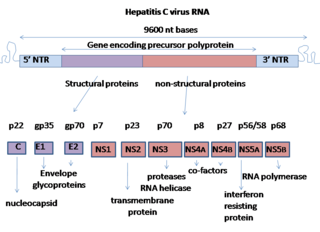 E1 is one of two subunits of the envelope glycoprotein found in the hepatitis C virus. The other subunit is E2. This protein is a type 1 transmembrane protein with a highly glycosylated N-terminal ectodomain and a C-terminal hydrophobic anchor. After being synthesized the E1 glycoproteins associates with the E2 glycoprotein as a noncovalent heterodimer.

A hepatitis C vaccine, a vaccine capable of protecting against the hepatitis C virus (HCV), is not yet available. Although vaccines exist for hepatitis A and hepatitis B, development of an HCV vaccine has presented challenges. No vaccine is currently available, but several vaccines are currently under development.

A subunit vaccine is a vaccine that contains purified parts of the pathogen that are antigenic, or necessary to elicit a protective immune response. A "subunit" vaccine doesn't contain the whole pathogen, unlike live attenuated or inactivated vaccine, but contains only the antigenic parts such as proteins, polysaccharides or peptides. Because the vaccine doesn't contain "live" components of the pathogen, there is no risk of introducing the disease, and is safer and more stable than vaccine containing whole pathogens. Other advantages include being well-established technology and being suitable for immunocompromised individuals. Disadvantages include being relatively complex to manufacture compared to some vaccines, possibly requiring adjuvants and booster shots, and requiring time to examine which antigenic combinations may work best. 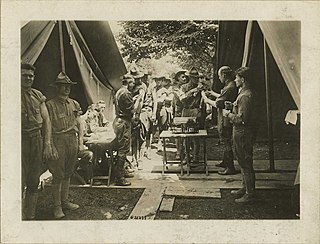 An inactivated vaccine is a vaccine consisting of virus particles, bacteria, or other pathogens that have been grown in culture and then killed to destroy disease-producing capacity. In contrast, live vaccines use pathogens that are still alive. Pathogens for inactivated vaccines are grown under controlled conditions and are killed as a means to reduce infectivity and thus prevent infection from the vaccine. 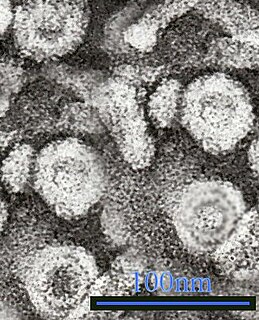 Hepatitis B virus (HBV) is a partially double-stranded DNA virus, a species of the genus Orthohepadnavirus and a member of the Hepadnaviridae family of viruses. This virus causes the disease hepatitis B.

Lagovirus is a genus of viruses, in the family Caliciviridae. Lagomorphs serve as natural hosts. There are two species in this genus. Diseases associated with this genus include: necrotizing hepatitis leading to fatal hemorrhages. 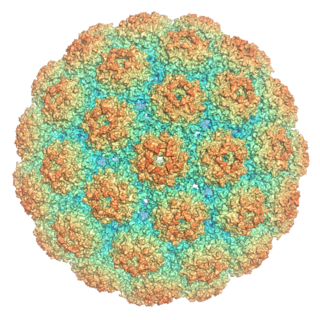 Murine polyomavirus is an unenveloped double-stranded DNA virus of the polyomavirus family. The first member of the family discovered, it was originally identified by accident in the 1950s. A component of mouse leukemia extract capable of causing tumors, particularly in the parotid gland, in newborn mice was reported by Ludwik Gross in 1953 and identified as a virus by Sarah Stewart and Bernice Eddy at the National Cancer Institute, after whom it was once called "SE polyoma". Stewart and Eddy would go on to study related polyomaviruses such as SV40 that infect primates, including humans. These discoveries were widely reported at the time and formed the early stages of understanding of oncoviruses.

Major capsid protein VP1 is a viral protein that is the main component of the polyomavirus capsid. VP1 monomers are generally around 350 amino acids long and are capable of self-assembly into an icosahedral structure consisting of 360 VP1 molecules organized into 72 pentamers. VP1 molecules possess a surface binding site that interacts with sialic acids attached to glycans, including some gangliosides, on the surfaces of cells to initiate the process of viral infection. The VP1 protein, along with capsid components VP2 and VP3, is expressed from the "late region" of the circular viral genome.

Flock House virus (FHV) is in the alphanodavirus genus of the Nodaviridae family of viruses. Flock House virus was isolated from a grass grub at the Flock House research station in Bulls, New Zealand. FHV is an extensively studied virus and is considered a model system for the study of other non-enveloped RNA viruses owing to its small size and genetic tractability, particularly to study the role of the transiently exposed hydrophobic gamma peptide and the metastability of the viral capsid. FHV can be engineered in insect cell culture allowing for the tailored production of native or mutant authentic virions or virus-like-particles. FHV is a platform for nanotechnology and nanomedicine, for example, for epitope display and vaccine development. Viral entry into host cells occurs via receptor-mediated endocytosis. Receptor binding initiates a sequence of events during which the virus exploits the host environment in order to deliver the viral cargo in to the host cytosol. Receptor binding prompts the meta-stability of the capsid–proteins, the coordinated rearrangements of which are crucial for subsequent steps in the infection pathway. In addition, the transient exposure of a covalently-independent hydrophobic γ-peptide is responsible for breaching cellular membranes and is thus essential for the viral entry of FHV into host cells.

Virus nanotechnology is the use of viruses as a source of nanoparticles for biomedical purposes. Viruses are made up of a genome and a capsid; and some viruses are enveloped. Most virus capsids measure between 20-500 nm in diameter. Because of their nanometer size dimensions, viruses have been considered as naturally occurring nanoparticles. Virus nanoparticles have been subject to the nanoscience and nanoengineering disciplines. Viruses can be regarded as prefabricated nanoparticles. Many different viruses have been studied for various applications in nanotechnology: for example, mammalian viruses are being developed as vectors for gene delivery, and bacteriophages and plant viruses have been used in drug delivery and imaging applications as well as in vaccines and immunotherapy intervention. 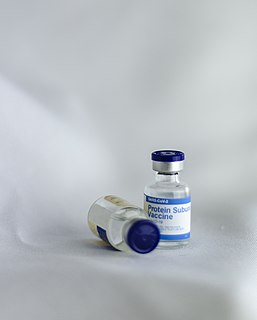