The Johns Hopkins Center for Health Security (abbreviated CHS) is an independent, nonprofit organization of the Johns Hopkins Bloomberg School of Public Health. The Center works to protect people’s health from epidemics and pandemics and ensures that communities are resilient to major challenges. The Center is also concerned with biological weapons and the biosecurity implications of emerging biotechnology.

The Center for Health Security gives policy recommendations to the United States government, the World Health Organization and the UN Biological Weapons Convention. [1] [3]

The Center for Health Security began as the Johns Hopkins Center for Civilian Biodefense Strategies (CCBS) in 1998 at the Johns Hopkins Bloomberg School of Public Health. [4] D. A. Henderson served as the founding director. [5] At that time, the Center was the first and only academic center focused on biosecurity policy and practice.

At one point around 2003, CHS had become part of a new umbrella organization called the Institute for Global Health and Security at the Johns Hopkins Bloomberg School of Public Health. [4] [6] [7]

In November 2003, some of the leaders left Johns Hopkins to join the University of Pittsburgh Medical Center (UPMC), and launched their own Center for Biosecurity of UPMC. This move apparently split the organization in two, and it is unclear what happened to the old organization. [4]

On April 30, 2013, the UPMC Center changed its name from "Center for Biosecurity of UPMC" to "UPMC Center for Health Security". This name change reflected a broadening of the scope of CHS's work.[ citation needed ]

Before 2017, CHS was heavily reliant on government funding. [1]

It maintains and edits a peer reviewed journal Health Security which is part of the Mary Ann Liebert publishing group.

It also provides editorial oversight for the journal Health Security, [22] which was launched in 2003 and called Biosecurity and Bioterrorism: Biodefense Strategy, Practice, and Science until 2015. [23]

The Center has published in journals including JAMA and The Lancet . A full list of publications is available on the CHS website. As of February 2017 [update] , the list shows more than 400 publications. [25]

On May 15, 2018, the Center hosted Clade X, [26] a day-long pandemic tabletop exercise that simulated a series of National Security Council–convened meetings of 10 US government leaders, played by individuals prominent in the fields of national security or epidemic response.

Drawing from actual events, Clade X identified important policy issues and preparedness challenges that could be solved with sufficient political will and attention. These issues were designed in a narrative to engage and educate the participants and the audience.

Clade X was livestreamed on Facebook and extensive materials from the exercise are available online. [27] [28]

On October 18, 2019, the CHS partnered with the World Economic Forum and the Bill and Melinda Gates Foundation to host the tabletop exercise Event 201 in New York City. [29] [30] According to the CHS, "[t]he exercise illustrated areas where public/private partnerships will be necessary during the response to a severe pandemic in order to diminish large-scale economic and societal consequences". [29]

Event 201 simulated the effects of a fictional coronavirus originating in bats but passing to humans via pigs. [31] 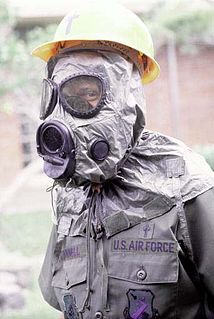 Bioterrorism is terrorism involving the intentional release or dissemination of biological agents. These agents are bacteria, viruses, insects, fungi or toxins, and may be in a naturally occurring or a human-modified form, in much the same way as in biological warfare. Further, modern agribusiness is vulnerable to anti-agricultural attacks by terrorists, and such attacks can seriously damage economy as well as consumer confidence. The latter destructive activity is called agrobioterrorism and is a subtype of agro-terrorism.

Biodefense refers to measures to restore biosecurity to a group of organisms who are, or may be, subject to biological threats or infectious diseases. Biodefense is frequently discussed in the context of biowar or bioterrorism, and is generally considered a military or emergency response term.

Donald Ainslie Henderson was an American medical doctor, educator, and epidemiologist who directed a 10-year international effort (1967–1977) that eradicated smallpox throughout the world and launched international childhood vaccination programs. From 1977 to 1990, he was Dean of the Johns Hopkins School of Public Health. Later, he played a leading role in instigating national programs for public health preparedness and response following biological attacks and national disasters. At the time of his death, he was Professor and Dean Emeritus of the Johns Hopkins Bloomberg School of Public Health, and Professor of Medicine and Public Health at the University of Pittsburgh, as well as Distinguished Scholar at the UPMC Center for Health Security.

Tara Kirk Sell is an American former competition swimmer and breaststroke specialist who is an Olympic silver medalist. She is a former world record holder in the 100-meter breaststroke.

The Global Health Security Initiative (GHSI) is an informal international partnership among countries in order to exchange information and coordinate practices for confronting new threats and risks to global health. It was formed to respond to threats of biological, chemical, or radio-nuclear terrorism (CBRN), with pandemic influenza added to the scope a year later.

The National Biodefense Analysis and Countermeasures Center (NBACC) is a government biodefense research laboratory created by the U.S. Department of Homeland Security (DHS) and located at the sprawling biodefense campus at Fort Detrick in Frederick, MD, USA. The NBACC is the principal U.S. biodefense research institution engaged in laboratory-based threat assessment and bioforensics. NBACC is an important part of the National Interagency Biodefense Campus (NIBC) also located at Fort Detrick for the US Army, National Institutes of Health and the US Department of Agriculture.

On December 19, 2006, the Pandemic and All-Hazards Preparedness Act (PAHPA), Public Law No. 109-417, was signed into law by President George W. Bush. First introduced in the House by Rep. Mike Rogers (R-MI) and Rep. Anna Eshoo (D-CA), PAHPA had broad implications for the United States Department of Health and Human Services's (HHS) preparedness and response activities. Among other things, the act amended the Public Health Service Act to establish within the department a new Assistant Secretary for Preparedness and Response (ASPR); provided new authorities for a number of programs, including the advanced development and acquisitions of medical countermeasures; and called for the establishment of a quadrennial National Health Security Strategy.

Atlantic Storm was a ministerial exercise simulating the top-level response to a bioterror incident. The simulation operated on January 14, 2005 in Washington, D.C. It was created in part to reveal the current international state of preparedness and possible political and public health issues that might evolve from such a crisis.

Biosecurity in the United States is governed by the Bureau of Western Hemisphere Affairs, which is part of the US Department of State. It obtains guidance and advice on specific matters relating to biosecurity from various other government agencies.

Open Philanthropy is a research and grantmaking foundation. It aims to make grants and to share its findings openly. Open Philanthropy identifies outstanding giving opportunities, makes grants, follows the results, and publishes their findings online. Its current co-chief executive officers are Holden Karnofsky and Alexander Berger, and its main funders are Cari Tuna and Dustin Moskovitz.

The Bipartisan Commission on Biodefense, formerly known as the Blue Ribbon Study Panel on Biodefense, is an organization of former high-ranking government officials that analyzes US capabilities and capacity to defend against biological threats. According to the Commission's mission statement, the organization was formed to "provide for a comprehensive assessment of the state of U.S. biodefense efforts, and to issue recommendations that will foster change."

The Alliance for Biosecurity is a consortium of companies that develop products to respond to national security threats, including bioterrorism pathogens and emerging infectious diseases. It is headquartered in Washington DC.

Crystal Watson is a senior scholar at the Johns Hopkins Center for Health Security and an assistant professor in the Department of Environmental Health and Engineering. She is an expert in health security, biodefense, and risk assessment and preparedness for emerging infectious diseases. She is currently working on the public health response to the Coronavirus disease 2019 (COVID-19) pandemic.

Saskia Popescu is an infectious disease epidemiologist and Senior Infection Preventionist in Phoenix, Arizona. She holds academic appointments at the University of Arizona and George Mason University, where she lectures on biopreparedness and pandemic and outbreak response. Since the start of the Coronavirus disease 2019 pandemic, Popescu has worked to prepare for and mitigate the spread of the disease. She has been recognized for her communication efforts around the pandemic, as well as her work on the front lines.

Elizabeth Cameron is an American national security expert specializing in biosecurity, biodefense, and bioterrorism. She serves as Senior Director for Global Health Security and Biodefense on the White House National Security Council staff.